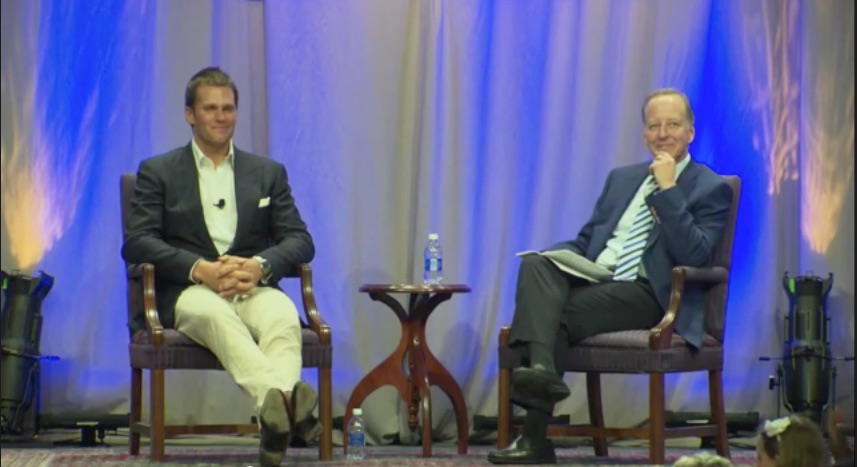 When the world ends, Jim Gray will be there to interview the cockroaches.

It was absolutely no surprise that of every person in the world of sports media, Gray, was hand-picked to sit down and chat with Tom Brady at Salem State University in the wake of Ted Wells’ DeflateGate report. It’s too good to be true, and yet it made perfect sense for him to be there.

I know Gray said the chat had been planned for four months, but if you would have told me four months ago that Brady will be embroiled in the biggest NFL scandal this year and was going to sit down at a tiny school outside Boston with the entire country watching him react with more elusiveness than he’s had at any point in his playing career, there is one man—and only one man—who I would have pegged for the gig.

Gray has been all things in media, from a well respected interviewer to radio host to, what he’s perhaps become most known for in the latest phase of his media career, a hired media gun. He’s the perfect hired gun. Gray has the look (and fantastic resume) of a real life media person, so when he appears in situations like the chat at Salem State with Brady, the impression of impartiality is inherent.

Brady and Gray masterfully orchestrated the DeflateGate conversation, which began with Gray allowing Brady to bask in the revelry of a friendly crowd before referencing the elephant in the room. (I named the elephant Awkwardness. He likes peanuts.)

Gray cautiously brought up the Wells report in such an “aw shucks I hate to spoil the party” manner that Brady actually quieted the crowd like he was trying to call a play on third and goal in Foxboro on a Sunday night before putting Gray over with those in attendance by joking, “Jim’s known for hard hitting questions. We have a show on Monday nights and this is how it usually goes, so I’m used to it.”

The whole act was as scripted as the first 15 plays of an NFL game, with Gray vacillating between hard-hitting journalist and a high-priced therapist, squeezing as much out of the “how do you feel” line of questions as possible.

Media highlight of the night: Jim Gray asking Tom Brady if they could take a picture together in the locker room.

In his defense, Gray did what he could to get something out of Brady about the deflated balls story without letting Brady actually say anything incriminating (note: not that he was going to). It was a master class in many ways, akin to a liberal journalist going to a Tea Party rally and trying to ask tough enough questions to keep with journalistic standards…while still hoping to get out of the building alive.

Why was it Gray? Because it’s always Gray.

Gray was the guy Fox News called when looking for someone to defend Brady in January. Whether he thinks Brady is a cheater or not immaterial (frankly I think much of DeflateGate is horribly…overblown.)

In his earlier years, Gray would do anything for that perfect quote, asking questions he felt were important no matter what the circumstance may be. He flat-out didn’t seem to care, and it made him both adored by media and reviled by fans and, at times, players themselves.

In recent years, with new things like “the internet” and “people writing opinions on the internet” growing in prominence, Gray reputation has been sullied. Gray’s presentation has always had a smarminess to it that has been generally off-putting to, well, most viewers, but there was an understated respect at the chutzpa he had to ask the questions he did.

And then came The Decision. That hour went about as poorly for Gray as it did for LeBron James.

“Are you still a nail-biter?” is a question that should honestly haunt Gray’s soul every night he goes to sleep, but he’s moved on from that horrific display of cronyism to…well…have similar conversations with Hall of Fame quarterbacks in the news for ball-softening scandals.

Gray is so connected to Brady with their weekly show on Westwood One’s Monday Night Football broadcast that it would have been surprising had anyone else been charged with facilitating that conversation at Salem State. That, like the Decision debacle with LeBron, is hard for most media types to handle. It’s not like doing a traditional interview, remember, because the man asking the questions was handpicked by his subject. Gray didn’t even work at ESPN at the time of The Decision, but he was forced upon the network by LeBron’s camp. For this chat with Brady, it’s enough that he didn’t do the interview while sitting on Tom’s lap.

Gray has made a career out of being the guy sitting across from the guy. When Floyd Mayweather had something to say to promote his fight or potential rematch with Manny Pacquaio he talked with Jim Gray—when he wasn’t hobnobbing with Stephen A., of course—because Mayweather and Gray both work with and for Showtime, respectively.

The man just has a knack for being part of the biggest interviews, be it by hard work, the chance at a little side action or sometimes a little of both. It doesn’t matter who the story is, Jim Gray’s probably the one on it. He’s Gumpian in that way, if Forrest traded in his running shoes for a tape recorder and shrimp boat for a lavalier mic.

When Kobe Bryant was accused of sexual assault, or broke up with Shaq or got upset the Philly fans booed him at the All Star game, Gray was there to ask the questions.

When someone at the Golf Channel was pulled off coverage for fighting with a caddy or a player, chances are it was probably Gray.

When Pete Rose was trying to get back in baseball—one of many times, it seems—Gray was on the field to ask him questions that have, in some ways, defined both of their careers ever since.

Now, Gray is the ultimate hired gun, in that he’ll ask tough questions in a way that don’t sound tough, while tossing softballs in a way that make it sound like he’s grilling a guy.