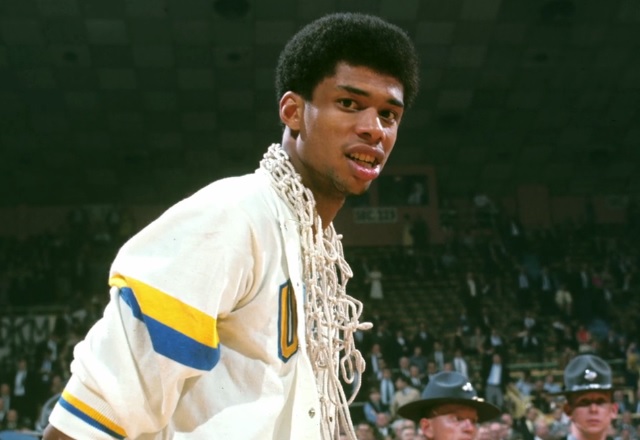 As the NBA’s all-time leading scorer, Kareem Abdul-Jabbar is obviously a legendary basketball star. However, part of what created that legend is that he remained a mystery to fans, media and teammates. His stoic demeanor rarely portrayed emotion, giving the impression that he was aloof and unapproachable.

But HBO’s documentary Kareem: Minority of One (premiering Tuesday Nov. 3 at 10 p.m. ET) gives us the origin story behind the man’s often skeptical approach toward people. Early on in his high school career, when he was a 14-year-old playing varsity basketball at New York’s Power Memorial, showing the emotion of a child among young men made him stand out, something he never wanted to do.

Abdul-Jabbar followed his own path, often different than what may have been expected from an athlete of his achievements, a celebrity of his cultural standing. Later in the film, when the timeline of the biography gets to the “Showtime” era of the Los Angeles Lakers, reporter Pat O’Brien describes the scene at The Forum Club before and after ballgames, which was the epitome of L.A. celebrity culture. “We’d all be going this way,” he explains, “and down that long, dark tunnel would be Kareem. He didn’t want any part of that.”

He never wanted any part of that. As the documentary shows early on with archival footage, the former Lew Alcindor doesn’t just sign autographs when he’s approached on the street. He’s wondering why people want that from him. He wants to know what they want from him. He wants those intruders to understand that their request makes him something other than an actual person. It’s far from the publicity-hungry stars we see these days, seeking out cameras, knowing how to pose just right, welcoming attention, autographs and selfies.

Abdul-Jabbar’s life has been one of walking the more meaningful path, something that satisfies his vast intellectual curiosity and betters him as a person in his view. In high school, he didn’t just play basketball, he was a member of the debate team. Expected to stay in New York and play college basketball at St. John’s, he went to UCLA. As a sophomore, he joined a summit with other prominent black athletes, including Jim Brown and Bill Russell, to demonstrate support for Muhammad Ali as he rejected being drafted into the U.S. military during the Vietnam War.

After being drafted No. 1 overall by the Milwaukee Bucks and winning the NBA championship in his second season, Alcindor announced he was changing his name to Kareem Abdul-Jabbar. It was perplexing and potentially alienating to fans, teammates and executives, but converting to Islam was something extremely important to him, going back to his UCLA days. That decision arguably cost him dearly, separating him from his family and former friends, in addition to making him a target for rival Muslim groups threatening grave harm.

He showed off his martial arts skills in a fight scene with friend Bruce Lee in the movie Game of Death. When fans and media thought he was too serious, Abdul-Jabbar demonstrated that he had a funny side and ability to laugh at himself, appearing in Airplane as “Roger Murdock” and roughing up a kid who says he doesn’t work on defense and only tries hard in the playoffs. That changed the way people saw him. At the very least, it gave them something different to think about. That almost seemed to be his purpose in life.

But Kareem: Minority of One isn’t just a documentary explaining Abdul-Jabbar’s maverick streak or his standing as a figure of social change. Produced by Mike Tollin and Jon Weinbach of Mandalay Sports Media, responsible for several “3o for 30” ESPN documentaries and sports docu-series such as Showtime’s The Franchise, the filmmakers tell the multiple sides of Abdul-Jabbar’s story. That biography obviously can’t be told without exploring his magnificent athletic career.

He was a dominant force at the high school and college levels, no one able to contend with his height and athleticism. Alcindor wasn’t a bull in the paint, simply bowling opponents over physically. (Though the NCAA did ban the dunk in 1967, almost certainly because of him.) He was graceful, demonstrating great skill and attention to detail. The documentary devotes a segment to his trademark “skyhook,” though I wish it would have delved much more into the process of creating and perfecting that signature, unstoppable shot.

As a professional, the winning didn’t come nearly as easily. Alcindor needed help during his 20-year NBA career. In Milwaukee, the Bucks didn’t win a championship until trading for Oscar Robertson to provide an outside threat. When that team deteriorated, Abdul-Jabbar seized the opportunity to relocate to a city more culturally attuned to his preferences and engineered a trade to the Lakers. Again, the documentary glosses over that process, neglecting to provide the exact details of the trade or whatever rule Abdul-Jabbar played in making the transaction happen.

Of course, it’s with the Lakers that he achieved his most celebrated athletic glories, winning five NBA championships alongside Magic Johnson and becoming the league’s all-time leading scorer. He also demonstrated his fierce competitiveness, punching Milwaukee’s Kent Benson in the face after the Bucks center elbowed Abdul-Jabbar in the chest. (The documentary has great video of that incident, which is shocking in its suddenness.)

During the 1985 NBA Finals versus the Boston Celtics, Abdul-Jabbar had a terrible Game 1, prompting many to question whether he had passed his prime as a player. Spurred by that failure and those doubts, he rebounded to dominate in the rest of the series, helping the Lakers to their third championship during his tenure. Regardless of Abdul-Jabbar’s other interests outside of sports and his desire to be defined as more than an athlete, he was a great competitor who wanted to be the best and responded when he was challenged. The documentary absolutely underlines that aspect of his athletic career and what it meant to him as a person.

But what makes this particular film special is that Abdul-Jabbar has reached the point where he’s contemplative about his life and career — and, more importantly, is willing to talk about it. The smile on his face when he describes beating the Celtics for a NBA title at Boston Garden says so much about what that achievement meant to him, while also revealing a side most fans and media never really got to see during his playing days. He loved to win and he could appreciate the moment. He still can.

Abdul-Jabbar basically defined the “farewell tour” for athletes during his final NBA season in 1988-89. Not only did it give fans and teams in every NBA city a chance to express their appreciation — through cheers and gifts — for one of the greatest basketball players ever seen and an iconic cultural figure, but it also provided the player with a chance to consider how much of an impact he made, how he touched those who watched him.

The use of Abdul-Jabbar’s final game on April 23, 1989 as a framing device for the documentary is basically perfect, representing what Kareem: Minority of One is about: Appreciation for the player and the man, along with his acknowledgement of the awe and respect he engendered. Like the entire film, it’s extremely well done.