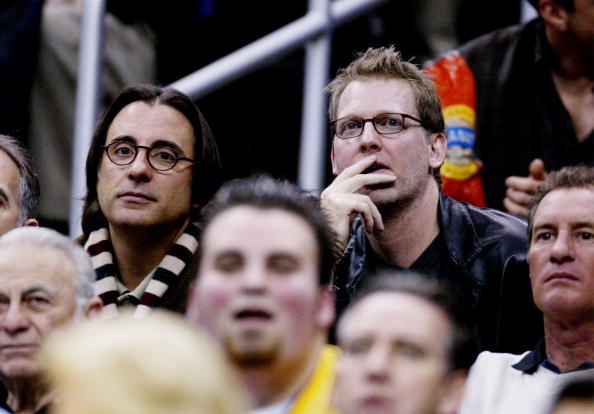 With the surprising development of Jon Stewart announcing his intentions to leave the Daily Show this year, speculation has immediately begun as to who will take the comedic news baton.  But there was one name that kept popping up on my timeline last night as the sentimental favorite from the cross-section of sports fans and Daily Show fans.

That person is none other than Stewart’s predecessor – Craig Kilborn.

Of course, the thought that Kilborn should come back to the Daily Show and pull a LeBron James coming home to the Cavliers is said mostly in jest because, well, nobody really knows what happened to the guy.  In terms of sports and/or media mysteries, “Whatever happened to Craig Kilborn” might be second behind “Whatever happened to Sports by Brooks” in the power rankings.

Deep beneath the earth, Craig Kilborn arises from a deathless slumber, his gruesome visage forming into smirk as he sharpens his pompadour

[Somewhere Craig Kilborn just woke up from a deep sleep] "This is my chance… again." pic.twitter.com/CHVMIF7MQa

Kilborn was one of a few anchors who revolutionized SportsCenter in the mid-90’s from the dry highlight read to one oozing with personality and catchphrases.  Before Kilborn, nobody probably thought to use “Jumanji” for a slam dunk highlight.  Kilborn had a very unique air about him compared to other SportsCenter anchors.  From growing up watching Kilborn, I always got the sense that he knew deep down he wouldn’t be long for the job because he felt he was too smart and/or clever to just be doing sports highlights.  Was he just a tad smug?  Maybe.  But he was unlike anyone else at ESPN.

So after just a few years as a late night SportsCenter anchor, Kilborn moved on to the Daily Show as its first host from 1996-1998.  Let’s step into the time machine and watch a young Jon Stewart as Kilborn’s guest right before he was to take over the show.

From the Daily Show, Kilborn became the host of the Late Late Show on CBS and trademarked his own off-beat approach to late night television.  This would be Kilborn’s longest-running gig from 1999-2004 but after over 1000 episodes he left CBS because he presumably wanted to try new things.  One would think with Kilborn’s name recognition and success that he would be able to find some kind of steady work either in news or in sports, right?  If there’s anyone who made their name for themselves in the mid-90s who was built for the age of social media, you would think Craig Kilborn would be at the top of the list.  He was born for the Age of Snark.

But instead of thriving in this new media environment, Kilborn has been a vagabond for the last decade.

From 2005-2014 his IMDb profile shows a series of six cameos in movies and television ranging from Chuck to The Benchwarmers to The Extendables.  No, not The Expendables, the parody version.  That appearance is Kilborn’s most recent acting credit from 2014.  He also appeared as himself in an episode of Celebrity Ghost Stories in 2013.  I presume he was talking about his career.

The biggest project Kilborn took part in the last decade was an attempt at his own show, The Kilborn File, in 2010.  Here he is on Good Day LA in 2010 promoting the show and informing the world what he’d been up to for the previous six years.

The Kilborn File never got off the ground.  After getting a six week test run in several Fox markets, it wasn’t renewed.  Since then, Kilborn has largely vanished back into nothingness aside from the small guest roles here and there mentioned above.  The last year of Google News searches for Kilborn’s name only show entries about his replacements (Craig Ferguson and Jon Stewart) and similarly themed articles speculating about his disappearance from the national stage.

This piece from the Los Angeles Times in 2010 regarding his first comeback gives some insights into why Kilborn stepped away from the spotlight, and perhaps why he’s never really stepped back in it:

“I enjoyed retirement the right way — linguine con vongole, red wine and plenty of truffle cheese. It was my Orson Welles stage,” Kilborn cracked. He’s since lost 15 pounds and looks like his old self. “I feel like a French woman,” he said.

Not one for reflection, Kilborn claims he has never questioned his decision and is tired of people looking for some secret reason behind his departure. “I didn’t leave to do anything else, I left to leave,” he said, acknowledging that he actually knew early into his stint that this wasn’t the job for him.

“I thought late-night was crowded … the formats repetitive,” Kilborn said at Chateau Marmont, just a hop and skip away from his Hollywood Hills home. “I achieved my goals, and it wasn’t all it was cracked up to be.” On his last show he said, “My job is done here,” and in his typically self-absorbed style quipped, “I’m going to miss my best friends — my cameras.”

“He was totally bored,” concurred Mike Gibbons, a former head writer and producer on Kilborn’s CBS’ show. “He’d much rather do his comedy and not deal with three guests a night promoting their wares.”

Getting antsy is a Kilborn tendency. “He worked real hard, especially in the beginning,” recalled ESPN Executive Editor John Walsh. But about halfway through his time at ESPN, Kilborn came to Walsh with a script for a sitcom he wanted to pursue. “He liked sports, but at a certain point and time he was going to move on. … He wanted a career that didn’t necessarily match up with ESPN and ‘Sports Center.'”

It was a similar story at “The Daily Show.” Kilborn was a hit right out of the box and put the network on the map in late night, but behind the scenes he wanted more say in the production. While Jon Stewart has since taken “The Daily Show” into another stratosphere with his biting political commentary, Kilborn’s old executive producer feels the original host was often underappreciated.

So here we are five years later asking those same questions again and wondering about Kilborn’s whereabouts.  At 52 years of age, there’s still plenty of years available for him to make another comeback to late night television or sports or whatever it is he might want to do.  If you’re Fox Sports 1 and your flagship show hasn’t really panned out the way you would like, maybe it’s worth giving Kilborn a call to see if he’d be interested.  Maybe it’s worth anybody giving Kilborn a call, just so we can know what exactly his current whereabouts are.