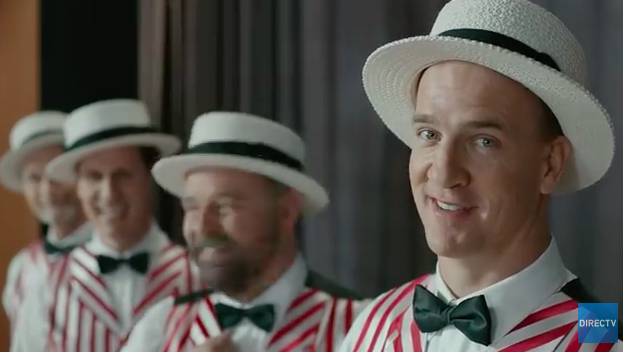 The NFL will make history this weekend as the Bills-Jaguars game from London is not televised over the terrestrial airwaves, but streamed digitally on Yahoo throughout the globe.  There’s quite a bit of anticipation for the Yahoo broadcast because we’ve never seen anything like it before, with the NFL selling a one-off game to a digital media company.  If it’s a success, we could see the Digital Media Age continue to break new ground in the sports world with more games going the exclusive streaming route.

Before it even starts broadcasting, there’s something about the Yahoo streaming game that will make fans welcome it with open arms.  Fewer commercials.

According to the New York Times, the digital broadcast will have 30 advertisers and cut out 8 minutes of commercials from the broadcast.  Rejoice, world!  Less commercial-touchback-commercial sequences of death for everyone!

The streamed game will have one commercial break fewer per quarter, shaving about eight minutes of advertising off the length of a traditional N.F.L. broadcast, said Hans Schroeder, the league’s senior vice president for media strategy and development.

“This was done to experiment with faster-paced games,” he said. “We’re focused on overall game length, to see how a slightly reduced ad load allows the game to move quicker.”

Fewer commercials during an NFL game?  It’s like celebrating Christmas, your birthday, New Year’s Eve, and I don’t know, let’s just throw in Columbus Day, all wrapped up into one!!!

I wonder if this is being done for the global audience because of the NFL’s reputation as a “stop-start” game.  The world game, soccer, has no commercial breaks through 45 minutes of each half.  The average NFL game has over an hour of commercials and just 11 minutes of actual game action.  In fact, when you think about it, it’s amazing that the NFL is so popular given that it’s basically one long infomercial for beer and daily fantasy periodically interrupted by a football game.  All I can say is “please do this for every other NFL broadcast.”

The Times drops a couple other of interesting nuggets about the “experimental” nature of the broadcast, including the fact that Yahoo paid quite the price tag for the prestigious honor of broadcasting the first streaming game in league history – $20 million dollars.

The globally streamed game is an experiment by the N.F.L. to gauge the appeal of American football internationally, as well as how popular a game will be when it is distributed almost entirely digitally. It could lead to a more extensive streaming deal in the future with Yahoo or another digital company.

Steve Bornstein, the league’s former executive vice president for media, said, “I take them at their word that this is an experiment. I think they want to find out what the potential is. I’m not sure what they will learn from it but I applaud them for thinking, ‘Let’s try something.’ ”

Yahoo paid around $20 million to carry the game, which starts at 9:30 a.m. Eastern time. The game will be produced by CBS and carried on television in the United States only in the Buffalo and Jacksonville markets — which account for 1 percent of the country’s television households.

The rights to digitally stream one game between two mediocre NFL franchises costs $20 million dollars.  Try to wrap your mind around that number.  Not to put my Darren Rovell hat on here or anything, but if this game goes 3 hours, Yahoo is paying $1,851 per second for this game.  That’s an incredible figure.  But if the game broadcast is a success and truly reaches a global audience (and they continue to make huge sums of money in a la carte rights fees), you can bet that this won’t be the last game that the NFL chooses to stream online.

And as long as we can be promised fewer tedious commercial breaks, fans will probably hope it’s not the last online game we see either.