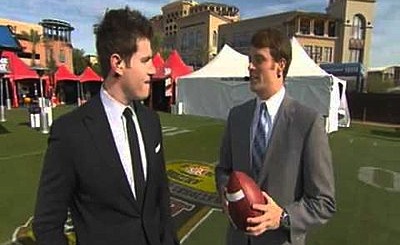 When Tim Tebow signed with ESPN before the 2014 college football season, he always claimed it was temporary until he was picked up by an NFL team.  Not too many people thought it would actually happen, but it did thanks to Chip Kelly, and ESPN was happy to let him go so they could spend every waking moment of the day talking about him again.  (Which is the weirdest thing ever because ESPN cares more about Tebow the football player than Tebow the ESPN employee.)

Tebow the analyst was pretty good on ESPN, which was bizarre and refreshing all in one because when ESPN spends any time on Tebow the football player you want to throw it through the nearest window.  The other side of Tebow’s football odyssey is where ESPN goes with him back in the NFL from a broadcast talent standpoint.  Tebow’s departure left an empty slot on ESPN’s SEC Nation pregame show on the SEC Network.  And to no surprise, ESPN named former Alabama QB Greg McElroy as his replacement on the show.

National championship-winning quarterback and SEC Network analyst Greg McElroy will join the desk of SEC Nation, the network’s traveling pregame show, this fall. The former Alabama Crimson Tide and Jets quarterback had been a college football studio analyst for the network over the past year, contributing half-time and post-game analysis for SEC Network’s football games throughout the 2014 season.

We at Awful Announcing have always been very high on McElroy’s work from the first time he stepped on set a few years ago as a guest analyst.  And unlike Tebow, McElroy’s future looks like it is firmly in front of the cameras in the short and long term.  If his star continues to rise at ESPN, it’s a good bet to say that SEC Nation will just be one stop along the way to a more prominent role nationally as a college football analyst.