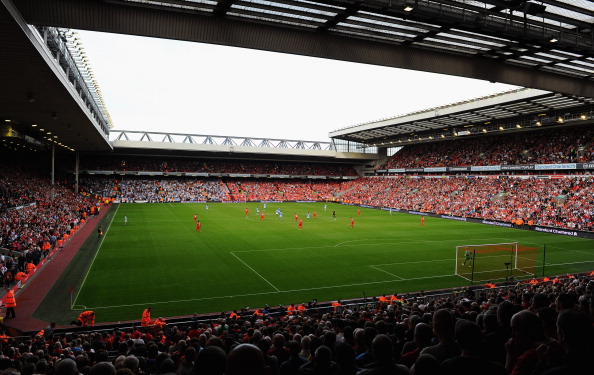 This weekend, NBC/NBCSN does what no previous American TV network has done with the English Premier League. Starting on Saturday and going through Monday, NBC/NBCSN will be live and on-site from three iconic stadiums for the first time since it began airing the EPL in 2013.

This means that host Rebecca Lowe will be leading the studio coverage at three different sites along with analysts Robbie Earle, Robbie Mustoe and Kyle Martino. NBC will not only have one on-site studio, but actually two, one up high and the other on the pitch. Steve Bower will be the host at field level and he’ll be joined by a rotation that includes the two Robbies, Martino and Lee Dixon.

Calling the matches will be Arlo White and he’ll be joined by either Graeme Le Saux, Dixon or current Everton and U.S. National Team goalkeeper Tim Howard.

On Saturday, the site chosen for the studio will be Turf Moor, the home of Burnley, for the entire day of coverage culminating with Burnley vs Arsenal at 12:30 p.m. ET on NBC.

The following day, the EPL on NBC crew moves to the venerable Old Trafford for the Manchester Derby where traditional rivals Manchester United and Manchester City square off.

Then on Monday, the site will be Anfield, where Liverpool will face Newcastle.

For NBC Sports coordinating producer Pierre Moosa, this is a chance to bring viewers closer to game with the live presence throughout the weekend, “Here’s an opportunity to really get people even closer to the environment and it’s three completely different experiences.”

Moosa who has been scouting locations in the UK prior to this weekend’s fixtures says the three stadiums chosen for coverage offer completely different atmospheres. For instance in regards to Turf Moor, Moosa said, “That stadium has such incredible character, the passion of the town, the atmosphere is just tremendous and you really feel it when you go there.”

Moosa adds that Turf Moor is intimate and when he witnessed a goal being scored, he felt what it meant to the fans as well as the town.

For the Manchester Derby at Old Trafford, Moosa said it’s one of the most iconic football stadiums in the world and arguably one of the biggest local derbies in club football.

And at Anfield two days prior to the 26th anniversary of the Hillsborough Disaster, Moosa said, “It’s going to be an intimate, poignant night and for us to be there to document that and be a part of that will be a very, very special evening.”

For Rebecca Lowe, it’s an opportunity to return home, “It’s going to be great for so many reasons. It’s going to be a bit surreal I have to say, going back to England and staying at a hotel and not having a car to drive around and not really having time to see my family, it’s going to be a weird situation for me, very surreal, but to get to go to the stadiums again and I haven’t been to any these in a couple of years now. I’ve missed them and it’ll be great to be there amongst the action.”

One of the reasons why NBC Sports Group is heading to the U.K. is to capture the atmosphere and energy of the stadium. Moosa said it’s nothing like he’s seen in the U.S., “At a Premier League match, (fans) stand, they chant and they cheer for 45 straight minutes, take a quick break at half and it’s another 45 straight minutes and it means so much to the fans and the passion and the supporters is something you rarely experience at that level and the closest thing I can equate that to is a big college football game or big college basketball game, it’s just amazing to see … the chanting, the sounds, the atmosphere. You really feel it.”

Lowe says the energy is totally different depending on which stadium you attend, “The energy at Anfield is different than the energy at Old Trafford and different again at Turf Moor, but every single one at the Premier League, I’m lucky to have been to many, many times and they really are different. I think a lot of it depends on the game you’re going to.”

She adds that the stadium she’s most looking forward to seeing again is Anfield, “I just love going there. There’s something about the stadium. It’s the fact that it’s still got so much of its old-fashioned nature to it. The dressing rooms are quite small, they’re not how you’d expect a big Premier League club’s dressing rooms to be, they’re quite pokey, they’re not very glamorous. The whole tunnel area is tiny and I used to stand down there and you’re very much in the mix. You’re very much listening to what’s going on and that’s what’s really special. It’s so rich in history and I love being there.”

Lowe told Awful Announcing that she felt NBC had been planning on a road trip for several months, “I think NBC always wanted to do this. I think this has been something they’ve been wanting to do, to try and just take the viewers as close as we possibly can to the action and get in amongst it, it’s been an aim of theirs.

“My entire week has been scheduled from the time I left my house to the time I return to my house the following Tuesday,” Lowe said.

Even though she’s going back just for a short period, Lowe said she’s really looking forward to some tastes of home, “I’ve been telling everybody over here how English chocolate is just a little bit better so I’m excited to start giving Kyle Martino and our boss, Pierre Moosa some English chocolate to show them what they’ve been missing.”

NBCSN begins its coverage Saturday at 7 a.m. ET from Turf Moor with Premier League Live followed by Swansea City vs. Everton at 7:45 a.m. then Tottenham vs. Aston Villa at 10 a.m. NBC will have live coverage of the Burnley vs. Arsenal game from Turf Moor at 12:30 p.m.

Sunday, the crew will be live from Old Trafford beginning at 7:30 a.m. followed by Queens Park Rangers vs. Chelsea then the Manchester Derby between United and City at 11 a.m.

Then on Monday, NBCSN will live from Anfield with Premier League Live at 2 p.m. with the English edition of Monday Night Football featuring Liverpool vs. Newcastle at 3.

This could be a template for an annual trip for NBCSN and perhaps for the rightsholder of the next TV contract which begins in 2016-17.