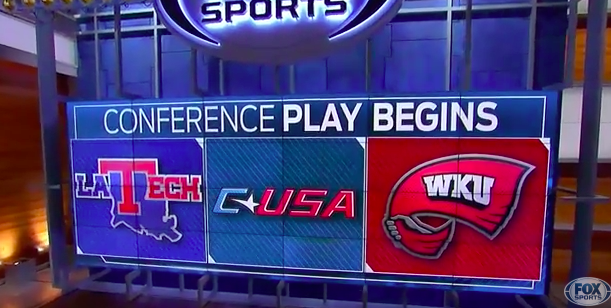 If you are an anti-NFL football fan or just completely and totally obsessed with college football, you may have decided to tune in to watch Lousiana Tech play Western Kentucky on FS1 instead of Patriots-Steelers on NBC.  And as you watched and listened to that broadcast, you may have noticed that something was a little off.

FS1 broadcasters Rob Stone, Kirk Morrison, and Dave Wannstedt were 2,067 miles away from Bowling Green, Kentucky calling the game from the FS1 studios in Los Angeles.  FS1 sent sideline reporter Petros Papadakis to the game venue, but left everyone else behind.

FS1 is not the first network to attempt calling NCAA games from the studio.  Last season, ESPN selected a handful of college basketball games that were produced and called from Bristol, Connecticut.  The results were suboptimal broadcasts (and not in the cheeky Men in Blazers way) that were widely panned by fans.

In what came as no surprise at all, FS1 drew similar criticism.

But maybe I'll switch to Pats-Steelers because this is just pitiful. For all the complaining we do about ESPN, at least they make an effort.

FS1 announcers calling this game from a studio in LA is super weird. Just not what I’m used to.

First things first..doing play by play from the studio is awful FS1..come on

FS1 will also call tonight’s Miami-Florida Atlantic game from the studio in the same setup.  Papadakis will be at the stadium while Stone, Wannstedt, and Matt Leinart will serve as game announcers in Los Angeles.

Whereas ESPN has been open in admitting that calling games from Bristol or leaving producers behind saves quite a bit of coin, FS1 maintains that having the studio crew call games will allow them to do new things they can’t normally do for these games.  A Fox executive told the Miami Herald that it was not a cost-cutting measure, but rather an experiment:

### The network wants to give Wannstedt and Leinart an opportunity to be game analysts, but it would be difficult if not impossible for them to work Friday’s game in Boca Raton and then be back in Los Angeles to handle their main job as Fox college studio analysts on a 4 p.m. pre-game show.

With Wannstedt having worked at UM, “he was a no-brainer to use [on this game],” said Brad Zager, Fox’s vice president of remote operations. “We have a group in studio that could really call a good game.”

Sideline reporter Petros Papadakis will be Fox’s only on-air presence at Friday’s game.

### Zager said handling game production from the studio — as well as keeping the announcers there — allows Fox to use additional technical toys.

“We can use virtual graphics, stuff that isn’t available on a Conference USA broadcast,” Zager said. “Wannstedt can draw plays on a greaseboard and Leinart can do demonstrations.”

Fox insists this isn’t an attempt to save money and Zager said Fox won’t attempt to conceal that the announcers are in California.

“It’s an experiment,” Zager said. “Can we do a college game and have the viewer not lose anything by having the announcers and camera in studio? It’s an opportunity to see if it’s something that works.”

It’s curious rationale from Fox Sports to say the least because they should be well aware that other networks have tried this “experiment” and it simply has not worked.  Sports fans are smart.  They can tell the difference when an announcer is on site and a part of the game or a disembodied voice thousands of miles away.  It doesn’t matter who the announcers are or how good the game is – you could have Al Michaels and Cris Collinsworth call the Super Bowl from the studio and it still wouldn’t be a good broadcast.  There’s just something about being so far away that creates a disconnect for everyone involved.  And all those vibes about last night’s telecast being “weird’ represent exactly that.

Yes, networks call some sporting events from the studio all the time, especially international ones like soccer or Formula One.  But the difference in broadcast quality for sports like football and basketball when announcers are in the studio versus the stadium is almost always guaranteed to be a negative impact.  If FS1 is doing this to cut down on their expenses and save money, so be it.  But let’s stop kidding ourselves that this “experiment” of calling games from the studio is ever going to be well received by viewers.