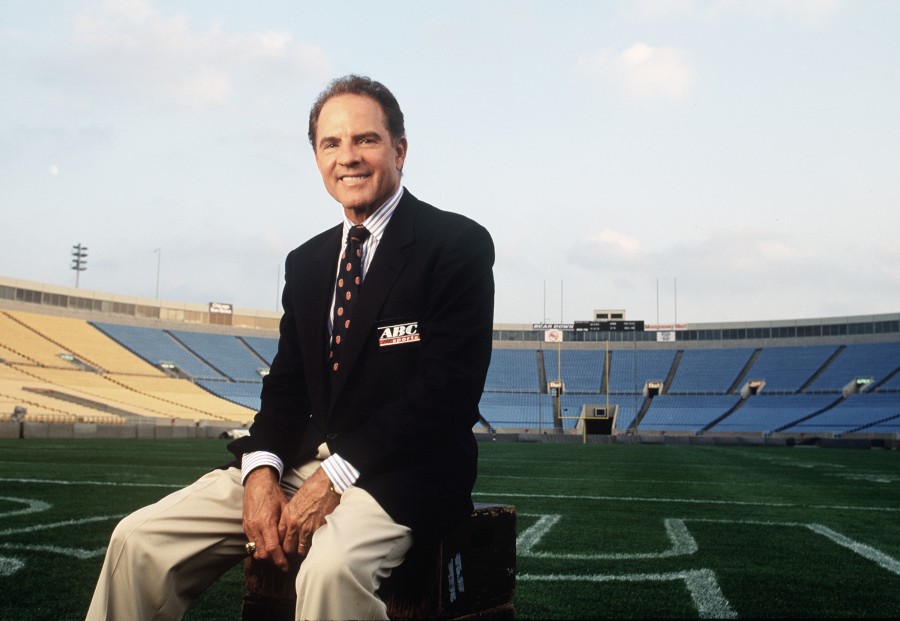 To football fans in their 70’s and 80’s, Frank Gifford was known as a very good football player who first was in college at USC, then was both on offense and defense with the New York Football Giants.

For sports fans ranging in age from their 30’s to their 50’s, Gifford was a broadcaster who was synonymous with Monday Night Football first as a play-by-play man then as an analyst, a host on ABC’s Wide World of Sports, an Olympics host and a man who could call a multitude of sports.

Gifford began his broadcasting career with CBS as an NFL analyst. He was at the Ice Bowl which pitted Dallas and Green Bay at a very cold Lambeau Field in 1967 and he was the analyst on Super Bowl I partnering with Ray Scott and Jack Whitaker. In addition to the NFL, CBS utilized him on golf where he called The Masters for three years. Jim Nantz paid tribute to Gifford during the Bridgestone Invitational final round on Sunday:

One of Gifford’s last events for CBS was the NFC Divisional Playoff game between the Detroit Lions and Dallas Cowboys. Gifford’s play-by-play partner was the late Frank Glieber:

In 1971, ABC lured Gifford away from CBS on the promise he would call play-by-play not just on football but on other sports as well. Gifford expanded his portfolio with the Olympics and Wide World of Sports.

Gifford began his ABC career on Monday Night Football partnered with Howard Cosell and Don Meredith. Here’s Gifford’s debut which was a preseason game between the Kansas City Chiefs and New York Jets. Gifford gets the microphone from Howard at the five minute mark. The original MNF theme is quite funky.

The trio would work together until 1973 when Meredith left for NBC. Gifford and Cosell would be joined at first by Fred Williamson who was fired in the 1974 preseason and subsequently replaced by Alex Karras. Meredith would return for the 1977 season and remained on MNF until Super Bowl XIX in 1985. It would be the only Super Bowl Gifford would call play-by-play. Joe Theismann was the third man in the booth for the Big Game along with Gifford and Meredith.

Gifford was the glue in the broadcast booth calling play-by-play with multiple partners including Fran Tarkenton, Joe Namath and OJ Simpson before ABC Sports decided to make a change in the booth for the 1986 season by making Gifford the analyst and bringing in Al Michaels to call the games.

In 1987, ABC hired Dan Dierforf to be a second analyst and Monday Night Football would become a three man booth once again. This trio worked together until 1997 calling three Super Bowls (XXII, XV and XXIX) as well the second game of the AFC-NFC Saturday Wild Card doubleheader along with their schedule of Monday Night games. Here’s the MNF open in 1988 which is known as the “Pinball Machine Intro” for obvious reasons:

Gifford’s last season on Monday Night Football was in 1998.

Gifford’s first Olympic assignment was in 1972 in Munich. Gifford was at the mic for the controversial USA vs. USSR final.

Gifford was also a studio host during the ABC Olympic era often manning the late night desk and sometimes hosting weekends. Here’s a clip from the 1984 Los Angeles Games on the last day of the Olympics with Kathleen Sullivan:

For ABC’s last Olympics in Calgary in 1988, Gifford co-hosted the late night studio with his wife, Kathie Lee. Unfortunately, we don’t have a clip for you. Suffice to say, it had to be seen to be believed.

Gifford called a number of events for ABC’s sports anthology program including the Harlem Globetrotters which were a regular staple of the show. But on Wide World, he was most identified with daredevil Evel Knievel who made appearances throughout the 1970’s. In this clip of an anniversary show from the late 1980’s, Gifford interviews Knievel about his jumps over double decker buses, the Snake River Canyon and tractor trailers.

Gifford was loyal to ABC throughout his tenure at the network. He also filled in on Good Morning America where he met his wife, Kathie Lee and they got married in 1986.

After ESPN took over ABC Sports, management decided to phase out Gifford from Monday Night Football. It first took him out of the booth following the 1997 season and placed Gifford on the Monday Night Blitz pregame show with Chris Berman in 1998. The show was based at the ESPN Zone sports bar in Baltimore where Gifford would introduce one segment and go home. It was embarrassing to see Gifford treated in that manner after 27 years at the network.

Gifford didn’t work in sports broadcasting again, except for making occasional appearances during ESPN Classic’s SportsCentury series and in various interviews. But he found himself tapped by ESPN one more time for the final Monday Night Football game on ABC in 2005 by appearing on the open with Don Meredith and Al Michaels:

For the 40th season of MNF, ESPN asked Gifford to voice some halftime vignettes and producer Jay Rothman says Frank’s voice will be used this season.

Gifford is survived by his wife Kathie Lee, their two children, three children from his first marriage and five grandchildren.

Bob Iger, the CEO of Disney issued this statement on Sunday:

“Frank Gifford was an exceptional man who will be missed by everyone who had the joy of seeing his talent on the field, the pleasure of watching his broadcasts, or the honor of knowing him. His many achievements were defined by a quiet dignity and a personal grace that is seldom seen in any arena; he truly embodied the very best of us. Frank’s contributions to ABC Sports and our company are immeasurable. We are honored to call him a Disney Legend and I am very fortunate to have called him a dear friend and colleague. Our thoughts and prayers are with his family at this difficult time.”

Gifford’s stamp on sports television lives on with Monday Night Football as well as on the Olympics.