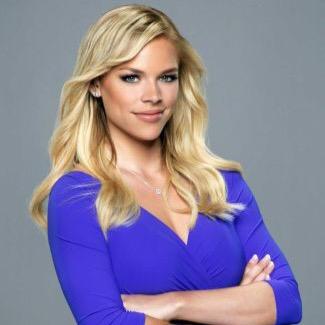 Julie Stewart-Binks of Fox Sports had a summer that might best be described as “eventful”. She was all over Fox’s coverage of the Women’s World Cup, working the entirety of the tournament from Vancouver to Moncton and everywhere in between. Once the Women’s World Cup concluded, she didn’t get a break and immediately jumped into Fox’s Gold Coverage, covering matches from coast to coast. She didn’t rest after the Gold Cup, and hopped right back into covering MLS for Fox, working the MLS All-Star Game in Denver and a Chicago Fire-FC Dallas match. That finally brought her two month road trip to an end.

Stewart-Binks talked with AA about her time at the Women’s World Cup, the Gold Cup follow-up, and some major takeaways from her time on the road.

She wasn’t embedded with one team, like Jenny Taft was with the United States team, or in one city during the World Cup. This resulted in her covering more than half the teams in the tournament, but she’s not complaining.

“I covered 15 different teams at the World Cup. That was insane. It was so difficult, but it was really rewarding. Coming out of the World Cup, I was so inspired. That was the best event I’ve ever covered in the world. I’ve covered the Olympics, the Stanley Cup Final, and other really cool events, but the Women’s World Cup was the number one thing I’ve ever done in my life.”

Of course, the preparations involved when covering so many teams playing in so many matches across a country weren’t exactly standard. In fact, they never really ended.

“Honestly, you never stop prepping. I’d finish one game, and I’ve already started on the next game. I would usually write my hits the night before because they would have to be approved from the higher-ups to make sure no one in the pregame show talks about them. If the pregame show was going to talk about them, then I had to change what I was going to do. Already the day before a match, I’m thinking about what I want to do, what are the things I’m looking for in the game. I had binoculars on the sideline because I wasn’t actually close enough to see what was going on at the benches.

“I had some local reporters from different countries help me learn words in their native language. If I wanted to hear if Nadine Angerer was telling her team to press up or go, they told me the words to listen for.

She wasn’t doing this alone, though. Producer Jeff Heyman worked alongside her, and ended up being a godsend.

“I did 33 games sideline in a summer. Some people don’t do 33 games in a year, or two years covering so many different sports. You’re forced to find things so quickly and find information when you have none. And when you’re on a plane, on a redeye, after just finishing two games in one city and you have a doubleheader the next day, my producer Jeff Heyman helped so much and was always two steps ahead.

“I had multiple breakdowns – full-blown. I remember it was day 41, and I told my sideline producer ‘I don’t know what happened’, and he told me ‘oh, you’re on day 11. I hit day 11 on day 9. We all went through it’. Between me and Jeff, we never hit the wall on the same day so we could each bring the other person out. I would take myself shopping – just going out and buying something would make me feel better. You start to go a little bit crazy in a way. I can’t imagine anyone with families and kids to deal with. You’ll ignore all that – you’re in it. It’s not a healthy way to live, but you do it because you love it.”

Heyman also helped out with match prep, something that was essential because of the numerous different teams being covered and the fact that most of them didn’t have native English speakers on the club or staff.

“They always put the press conferences online, so Jeff and I would divvy things up. I’d say, ‘I’ll take Norway and Thailand’, and he’d say ‘I’ll take Germany and see if there’s anything in there we can use,’ and he’d translate from the other country’s reporters. We’d try to figure out what’s big in Norway ahead of this game. And a lot of the time, it would be questions I would have asked that were the big headlines.”

The constant parade of flights, different hotels, and being away from home took a toll on Stewart-Binks, and she learned some valuable lessons for the future…in case Fox wants to send her on another marathon road trip.

“First of all, I’d pack less. I didn’t pack that much to begin with, but I just realized you kind of get sick of the clothes you brought for 65 days on the road, and it’s OK to buy stuff on the road. I’d tell myself at the beginning of the World Cup ‘everything will be OK’.

“Being on the road that long is so fun at first. It’s like eating an awesome ice cream sundae. I’m going to eat this every single day for 65 straight days, and after that, you never want to eat another ice cream sundae ever again. But then, you take some time…and you’re back into it.”

But Stewart-Binks didn’t just spend her whole summer in Canada – she also came back south of the border for the CONCACAF Gold Cup. The United States was a strong favorite, and a matchup with Mexico in the final seemed destined to happen. That matchup never happened thanks to Jamaica’s upset victory over the US in the semifinals in Atlanta, which led to a third place game against Panama in Chester with a vibe she described as “haunting” and plenty of questions surrounding Jurgen Klinsmann and CONCACAF.

“The low point of the summer was probably how the Gold Cup shook out. Everything with the US going out early, and the negative vibe with the Panama-Mexico blowup.

“It was not a good vibe at all. The American Outlaws supporters section was maybe 100 people [at the third place match]. They had the whole end at PPL Park in Chester, and no one was there. It was weird, almost haunting. These guys are everywhere, at every USA game. After that Jamaica game, once Bradley got them within one, you thought, ‘OK, for sure they’re going to score’. And it didn’t happen. and everyone was just like ‘oh my gosh, they lost to Jamaica in the semis?’.

“Everyone was on such a high after the US women. Jurgen Klinsmann was so open the entire tournament about how ‘we have to win this, this is our tournament to win’. But we already know they’ve fallen short.

“There were so many questions surrounding CONCACAF – ‘who’s in charge? Who do we go to even go to for information about this game about Panama?’ They changed the referee, and the USA didn’t even find out until we told them. There was this weird shadow of ‘who’s in charge, what are they doing, who’s mom and dad right now?'”

Stewart-Binks’ health also became an issue thanks to the heat during the day at the stadiums in Canada.

“I lost a lot of weight this summer, more than I realized, because I didn’t have a chance to eat food during games. During doubleheaders, FIFA didn’t let us bring in food, so I had to bring in Pedialyte so I wouldn’t die and I had enough electrolytes. In Ottawa, I even located where the ambulance was in case I was starting to feel heart palpitations because I had been sitting in the sun for already three hours and I already had another two hours to go.

“FIFA also wouldn’t let me leave between matches to go to the bathroom. I had to be very cautious about taking care of myself during those doubleheaders, because they also wouldn’t let you stand up once you sat in your chair.”

On the other side of the coin, Stewart-Binks experienced plenty of highlights, despite her home country of Canada being bounced by England in the quarterfinals.

“The best part was getting the opportunity to connect and talk with so many different players in the world. It was a really cool opportunity to get to actually talk with someone like Nadine Angerer and then getting to talk to Laura Bassitt after her awful own goal. I was able to connect with the subjects I was interviewing way more than I would when I had only ever covered men’s sports before.”

But despite the long days and nights, the potentially excessive travel, and a ruthless amount of information to process, there was no doubt in Stewart-Binks’ mind when I asked if she’d want to experience this summer again.

“I would definitely do it again. I’d probably not take everything as seriously as I did. At the end of the day, we’re just covering sports, and it’s fun.”