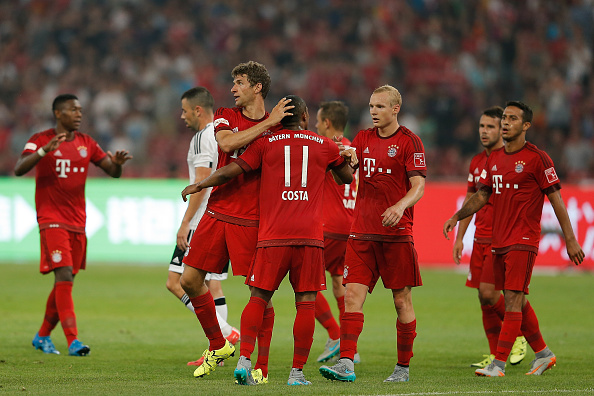 The Bundesliga on Fox will be taken quite literally on September 13th. Fox will air that weekend’s Bayern Munich-Augsburg match, tape-delayed and not live, on their broadcast network either before or after the network’s NFL games depending on each viewer’s market.

Soccer America talked with David Nathanson of Fox Sports about the strategy, which he compared to Fox’s strategy with the Premier League when they had the rights before NBC.

“The power of using the NFL, even if the game was not live, led to the most-watched Premier League game in U.S. history and it still stands today,” said Nathanson, referring to the September 2011 Manchester United-Chelsea match. “We’re going to use the same tactic with the Bundesliga.”

Nathanson is also predicting that the tape-delayed Bayern-Augsburg match will be the most-watched Bundesliga match in America (which, duh and/or hello) and that Fox is also considering airing more Bundesliga games (either on a live or tape-delayed basis) on the broadcast network.

Because of the way the Bundesliga’s Sunday scheduling is laid out, airing a match live on Fox’s broadcast network would be difficult because of their NFL commitments. For example, the weekly 11:30 AM match would completely eliminate Fox NFL Sunday (and might actually run into the beginning of the week’s NFL games), and the 9:30 AM match would also end up cutting into Fox NFL Kickoff, which Fox has moved over from Fox Sports 1 and retooled for this NFL season.

I think the main issue I have with this is that Fox chose a match from Saturday to re-air. I understand they want to show off Bayern Munich, but featuring a match that’s more than 24 hours seems like a weird choice. Going with Dortmund-Leverkusen on September 20th or Bayern-Dortmund on October 4th both seem like better choices – they’re both matches involving big clubs, and they both take place on Sunday, so they wouldn’t be tape-delayed by *that* much.