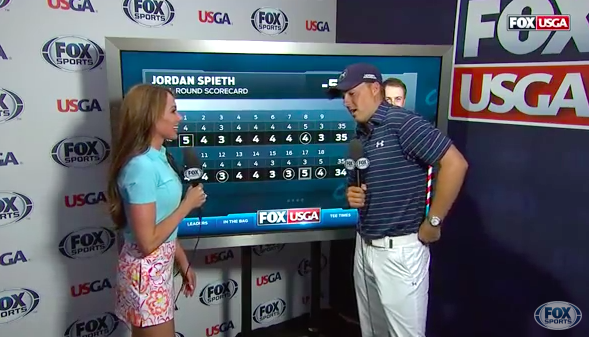 Fox Sports was raked over the coals pretty firmly for their grand debut at the US Open a few weeks ago.  And while we weren’t quite as down on the coverage as a lot of sports media observers and golf fans, there were a couple obvious improvements that could have been made.

One of those areas of Fox’s coverage that was the weakest was the post-round interviews with former Golf Channel alum Holly Sonders.  While Sonders is a well-known television personality who has spent a lot of time with the sport, it was clear she was not a good fit for the role.  While there were a few awkward moments throughout the week (the giant television screen certainly didn’t help matters), Sonders questioning Jordan Spieth about his fifth outfit after getting halfway to the grand slam will go down in postgame interview infamy.

At their third USGA major of the year, the US Women’s Open, Fox Sports will be making a change.  Via Penn Live, Sonders will not be handling the post-round interviews and instead will focus on hosting a postgame show on Fox Sports 1.  She’ll be replaced by Shane O’Donoghue for live interviews during the telecast:

Whoever wins the U.S. Women’s Open at Lancaster Country Club this weekend won’t speak with Fox reporter Holly Sonders behind the 18th green.

Sonders faced a hefty dose of criticism after her interview of U.S. Open champion Jordan Spieth last month, and she’s taking on a different role for this weekend’s championship. Sonders will host a half-hour post-match show on Fox Sports 1 on Saturday and Sunday, while Shane O’Donoghue conducts the on-course interviews.

“We’re not reassigning Holly because she did a bad job,” Fox’s coordinating producer Mark Loomis said. “I think Holly’s been great for us. It’s just that she can’t do both the postgame show and the interviews.”

Fox can spin this any way they’d like publicly, but from the outside it’s difficult to see this as anything but a step down for Sonders.  Not only is she going from Fox to FS1, she’s going from live coverage to the postgame.  Just on sheer viewership alone, that’s going to be a significant drop off.

This could be a move that’s best for everyone involved, though.  Curt Menefee was another poor fit for the telecast as studio host, so maybe hosting can be a better long-term role for Sonders as a part of Fox’s USGA coverage over the next decade.  It could be one of a number of changes Fox makes by the time the 2016 US Open rolls around.