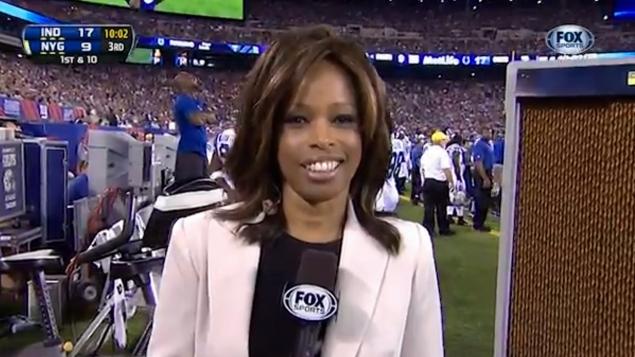 Last year Fox Sports made the surprising decision to demote Pam Oliver from her longtime position as sideline reporter for the network’s #1 NFL broadcast team.  Oliver would call one season for the network’s #2 team after originally not wanting her on the sidelines at all, before transitioning to a new role at Fox Sports that would include a wider array of responsibilities.

It appeared from the surface that Fox was pushing Oliver out and the veteran reporter was very vocal in sharing her perspective on the reasons why – she wasn’t “young, blond and hot” like many other women working for Fox.  Oliver also revealed she had to convince her bosses to spend a 20th year on the sidelines in 2014 with Kevin Burkhardt and John Lynch.  Fox could not have anticipated the backlash that would come through the public airing of the behind the scenes process by Oliver.

Coming into the 2015 season, Fox is reversing their plans for Oliver.  Instead of exiting her role on the sidelines, the network has committed to her working on the sidelines for the next two seasons.  Via Richard Deitsch at Sports Illustrated:

“The call was so completely out of the blue,” Oliver says. “I also felt it was one of those things like, ‘Why would we go back to this possibility?’ I felt we had all come through a pretty big ruckus and that door had been closed, dead-bolted, chained up. I had fully weaned myself from that role so to have that door open again, and I had difficulty wrapping my brain around it. So I put the decision on the shelf.”

Oliver took a couple of weeks to think about the decision. She solicited opinions of family, her mentors, her agent and some friends. Finally, she decided that she wanted to continue and told her bosses on Feb. 3 that she would come back to the sidelines. Here’s the kicker: The new assignment isn’t just for 2015. She will be part of the No. 2 team of Burkhardt and Lynch for the 2015 and 2016 NFL seasons, which is the duration of her contract with Fox Sports.

“I wasn’t that interested in just one year,” Oliver says. “So this is great. I know that for the next two years we are a true team and I am not some guest. I think we will really take it to another level next season.”

What’s been most intriguing about this entire saga is how it’s played out in the public eye.  That’s unusual for any talent dealings in sports media.  And because of that, it hasn’t been a very flattering experience for Fox Sports.  From replacing Oliver with Erin Andrews in the first place, to the notion that they were trying to forcibly remove her from the sidelines, to the belief that Fox desires a certain look for their on-air female employees, it hasn’t been a great reflection on the company.  Credit to Oliver for standing up for herself and being willing to speak out when feeling aggrieved with how she was treated by her employer of nearly 20 years.

Fox eventually arrived at the right decision by keeping Oliver on the sidelines throughout the remainder of her contract – that’s where she clearly wants to be and that’s where she has been one of the best in her field.  Perhaps they deserve some modicum of credit for adjusting their strategy and coming to this conclusion, but one wonders just how much the very public nature of this situation had to do with that.