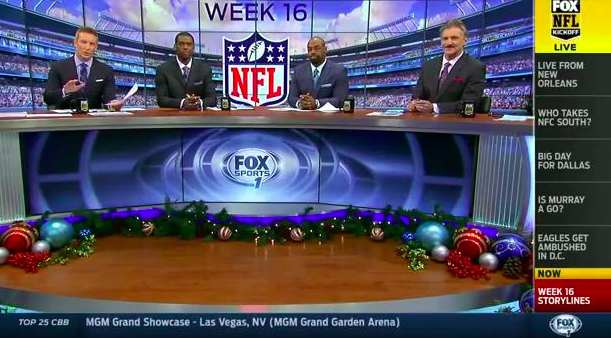 If there’s one truth in sports broadcasting it’s that networks can never have enough NFL content.  So it stands to reason that just one hour of network pregame programming would no longer be enough in 2015.  Fox Sports is the first of the broadcast networks to make the jump as Sports Business Journal reports the company will be moving its Fox NFL Kickoff show from cable (FS1) to network television (Fox).  The show will now serve as a lead in for Fox NFL Sunday for a new two hour block of Sunday morning NFL pregame coverage.

Competition among NFL pregame shows will ramp up this fall as Fox plans to start its broadcast coverage an hour earlier.

The “Fox NFL Kickoff” studio show will move from Fox Sports 1 to Fox, where it will lead into the network’s highly rated “Fox NFL Sunday.”

Network affiliates have been asked to clear an extra hour on Sunday mornings so that Fox’s NFL programming can start at 11 a.m. ET. Fox has started shopping the show to advertisers and is in discussions with several clients about a presenting sponsorship to the show, a Fox executive said.

Why move the show off of Fox Sports 1 to the Fox mothership?  Well, it could be another additional outlet for prospective signee Colin Cowherd.  And with SI reporting Fox will be paying Colin Cowherd in the $6 million per year, they’re not going to have him on a show only getting 76,000 viewers on Fox Sports 1.  Those were the kind of numbers Fox NFL Kickoff drew on the nascent cable network.

Last year, the 2-year-old “Fox NFL Kickoff” featured Joel Klatt as host, along with Randy Moss, Donovan McNabb (currently serving an indefinite suspension after a DUI arrest) and Dave Wannstedt serving as analysts. Fox executives have not made any decisions about the show’s cast or format except that it will be separate talent from its well-known “Fox NFL Sunday” team. Any new talent could include a name personality, and at deadline, Fox was talking with Colin Cowherd about a possible role in the show, sources said. ESPN announced last week that it was not renewing Cowherd’s deal.

“It makes more sense to put that show on Fox, turn it into a really good show and make us more of a football destination earlier in the day,” said Bill Wanger, Fox Sports’ executive vice president of programming, research and content strategy. “We just felt that we could utilize the asset that we created moreso on Fox versus FS1.”

The extra hour on Fox will add to an already crowded Sunday morning field that has ESPN, NFL Network and CBS Sports Network producing NFL pregame shows in the 11 a.m. ET hour.

Fox’s affiliates appear to welcome the move, happy to add another hour of highly rated NFL programming to their schedule, Wanger said. Some Fox affiliates have aired “Fox News Sunday” in the 11 a.m. ET hour; others have informercials leading into “Fox NFL Sunday.”

As for the content of the show itself, it’s not bad.  We gave it a B- last year in our review of all the NFL studio shows, noting that the biggest negative on the program was Donovan McNabb.  The former Eagles quarterback’s future is uncertain at Fox as he’s been suspended indefinitely after his second DUI arrest.  The program has some very good talent on hand like Joel Klatt and Randy Moss that can be built around.  But it’s hard to see how Cowherd might fit into that mix.  He’s not really a traditional host that’s going to set up his analysts and get out of the way.  He’s going to make his thoughts known on anything and everything.

In the end, this is a move that has plenty of pros and cons attached to it.  On the one hand, Fox NFL Kickoff will have exponentially more viewers on broadcast than on cable.  But on the other hand, it makes Fox Sports 1 a total non-factor on Sunday mornings when pretty much every other network has some kind of NFL programming.  If Cowherd is involved, Fox NFL Kickoff’s move to Fox gives him a much bigger platform as a splashy new hire compared to, for example, Erin Andrews’ largely anonymous one year tenure as host for the ratings-challenged and doomed-to-fail Fox College Saturday.