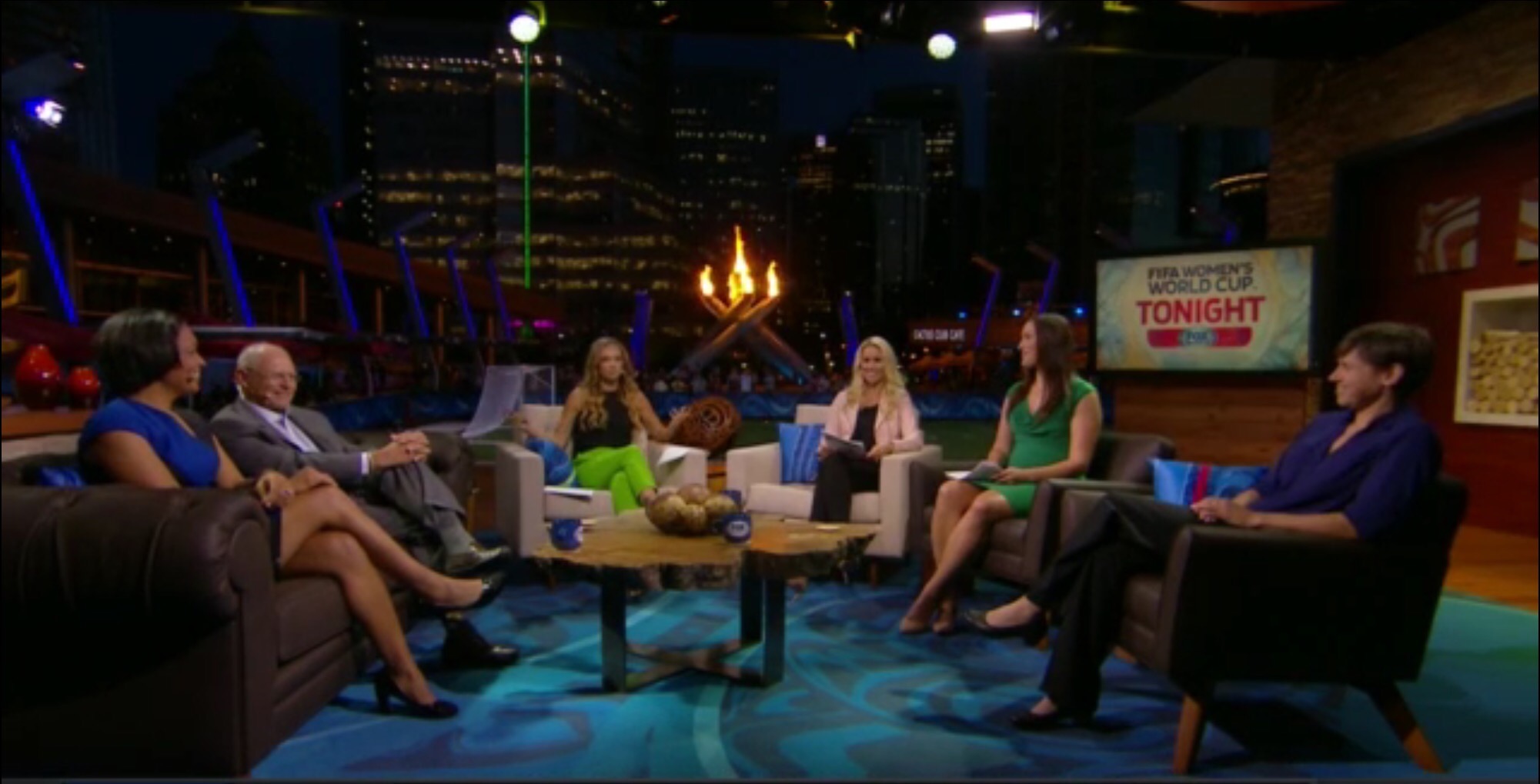 Saturday was the day that Fox was pointing toward ever since it was awarded the FIFA World Cup contract in 2011. A lot of planning went into Fox’s coverage of the FIFA Women’s World Cup in Canada including a very impressive set in Vancouver complete with a scenic view and a new graphics package. But even with a nice set and crisp graphics, it all comes down to the on-air talent and behind-the-scenes staff to execute the plan.

For the very first day, Fox has to be encouraged by the early results. Fox Sports 1 kicked off Fox Sports’ coverage by producing one-hour pregame shows for the two contests on Saturday, Canada vs. China and Netherlands vs. New Zealand.

The four analysts for the most part did their best to shoehorn their analysis in. Having four analysts on the set is rather crowded and Abdo managed to distribute the ball to everyone on the Fox team. A feature on Canadian coach John Herdman gave Fox an opportunity for the analysts to discuss how they would react to his tactics. Hingst could prove to play the Alexi Lalas role of the contrarian of this group as she said it wasn’t the coach who mattered in the Women’s World Cup, but the players.

Reporter Julie Stewart-Binks reported from Edmonton to talk about the artificial turf field and how the hot temperatures would affect the players. After three of the analysts including Mitts all mentioned their displeasure with the turf, Hingst downplayed the effects saying many players in the World Cup had experience playing or practicing on artificial turf prior to Saturday.

Saturday afternoon’s pregame show on Fox Sports 1 allowed the network to show off the elaborate set which had a very nice desk plus a field which was shown extensively.

The show led into Canada vs. China rather smoothly and transitioned to the game crew of JP Dellacamera, Cat Whitehill and Tony DiCicco.

As for the postgame, Fox Sports 1 had to rush of the air as UFC Fight Night was looming and didn’t have much time to discuss a call against China that led to a penalty kick for Canada in stoppage time.

In late night at 2 a.m. ET, Fox Sports 1 had its own version of ESPN’s relaxed World Cup Tonight show aptly called FIFA Women’s World Cup Tonight with Abdo, Hingst, Latham coming over from the afternoon and Angela Hucles, Lesley Osbourne and rules analyst Dr. Joe Machnik joining the holdovers for the one-hour show to talk about the Canadian PK and the call that led to Canada’s lone goal.

Once again, Hingst played the contrarian disagreeing with many of her fellow analysts on various issues, but at the time, you don’t want all of the analysts agreeing. If her opinions come out organically and aren’t part of a forced debate, then this could work. She could prove to be one of the more interesting facets of the Fox operation in Vancouver.

So Fox Sports has begun its 12-year World Cup journey that will last through 2026. We’ll see if the template set in Vancouver will continue to Russia (or England or Australia or wherever the 2018 World Cup will be held), Qatar (or the United States) and beyond. It’s going to be an interesting ride.