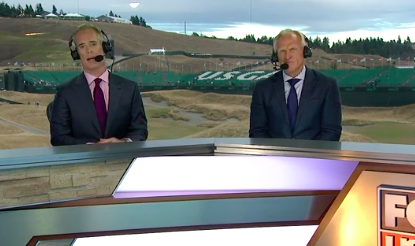 Thursday represented a historic day for golf as Fox Sports offered live coverage for their first major championship at the 2015 US Open.  There were plenty of questions and plenty of unknowns for how Fox would handle golf heading into the event at Chambers Bay.  We all know Fox’s history in pushing the envelope when it comes to live sports, even venturing into a universe of their own on many occasions (examples: the glow puck, Scooter, Cleatus the Robot, and Gus Johnson announcing Champions League soccer).

But when it comes to groups of sports fans, perhaps only soccer fans are in the same stratosphere as golf fans when it comes to their selective, specific taste and what they want from their television coverage: see any time Chris Berman stepped into the broadcast booth for ESPN.  Could Fox knock it down a couple of notches and serve the golf audience?  How would their largely untested roster hold up under the scrutiny for their major championship bow?  Would the network strike the right balance between technological innovations and tried and true traditional coverage?  Here were our first impressions…

Leaderboard Glitches At The Worst Time

– As I was watching the coverage Thursday afternoon, it kept occurring to me that something was missing.  For most shots throughout the day, there were no graphics that identified the basic facts that we see for every shot on every golf telecast: player name, hole number, shot, and position in the tournament.  Fox only had it for a select few golfers on the leaderboard and most of the time, I was refreshing the leaderboard page online to see where the golfers actually stood.  The reason?  Technical difficulties.  At least Joe Buck tried to make light of it…

When the graphics did appear, they looked pretty sharp.

This is how you grab a share of the #USOpen lead. http://t.co/vfoI8X6MWh

When we first heard about Fox winning US Open rights, we joked that the choice for their lead announcer would of course be Joe Buck… because who else?  With the Gus Johnson Soccer Experiment failing, the network really didn’t have anywhere else to turn.  And I’ve done a 180 as much as anyone on Buck as his work has really resonated with me more in the last few years so I was looking forward to seeing what he and Greg Norman could do together in the brand new 18th tower.

Of course the chemistry wasn’t going to be there on the first day, but I’m hopeful this can be a pretty solid partnership over the next few years.  Buck isn’t going to have quite the gravitas of a Jim Nantz or the experience of Dan Hicks, but he has the perfect temperament for a golf telecast and the skill to play traffic cop amongst the different holes and announcers.  His sardonic sense of humor can be a nice change of pace too as long as it doesn’t turn into another audition for Joe Buck Live.

Buck began the broadcast with “We’ve dropped out of a tree onto your TV,” which was a veiled shot at NBC’s Johnny Miller who bitterly complained when Fox was awarded the U.S. Open rights two years ago.

Norman was one of the strengths of the telecast, showing a willingness to call out players for questionable shots, but also praising them for good ones.  In other words, Johnny Miller with a bit softer edge and without the constant references to shooting a 63 at Oakmont.  He also added some tidbits that viewers didn’t know about (like saying how Angel Cabrera knew more English than he let on) With experience and time, this could be a fruitful partnership for Fox.

One of the things I learned going behind the scenes at the Presidents Cup with NBC’s golf crew was just how instinctual televised golf is to put together.  That’s not just the case in deciding which shots to show on live and on tape.  It’s particularly the case with the on-course reporters, who have to communicate with the broadcast booth and the production truck and know when to jump in and out of the telecast by a sixth sense, even though they’re a mile away.

The transitions between on-course and hole announcers and tower were a little rough from time to time, but that should come together with experience.  With that in mind, it’s tough to give a grade to any single announcer, although most of the cast seems passable.  If anything, Fox’s debut today should give the average viewer just that much more respect and appreciation for how difficult a job it truly is.

Well, this is awkward…

Since we’re contractually obligated to make a pun with any more random thoughts, let’s call these bullet points Chip Shots.  That’ll do…

– Fox is high on cross-promoting a lot of their network talent, but they might be smart to not rely so much on it moving forward.  The social media reviews for Curt Menefee and Charles Davis were particularly rough.

– One area where Fox can push golf coverage forward is clearly through technology.  Some of the camera angles from the drones were awesome.  Increased usage of shot tracer and contour maps for the greens drew the biggest praise for Fox’s coverage.

– The easiest way to win over golf fans?  Show more golf shots.  The more Fox can stay out of the studio and on the course, the better.  You can’t ask for much more than marathon coverage today almost from dawn till dusk.

– Fox’s online channels including its U.S. Open 360 panel discussion led by Joel Klatt with analysts Joe Ogilvie, Morgan Pressel and EA Tischler won praise from viewers for their candor, ability to be interactive and for their instant analysis on replays.

– Thank you, thank you, thank you Fox for not using the NFL on Fox theme for the US Open.  If that were the case, there would have been angry golf fans storming the TV tower with 9 irons.  You think I’m kidding…

Overall, the feedback for Fox’s first day of major championship golf coverage was not very pretty, especially after a quick social media scan.  Quite honestly, this was to be expected.

However, after seeing the pieces of coverage that I saw today, I’m a bit more optimistic we’ll see some improvements throughout the week and this could turn out to be a positive for the sport.  Fox held true to their promise not to completely reinvent the wheel – no Cleatus holograms, no fireballs shooting out of the hole for made putts, no endless crowd or band shots.  For all the curiosity about how Fox would do golf, 98% of this looked, sounded, and felt like a normal golf telecast.  And there’s enough here with the new innovations to tell golf fans to be patient while the network works out the kinks.  The first day of coverage showed golf fans that this does have the potential to work out once Fox gets some more tournaments under their belt.

At least, that should be the hope for everyone involved considering there’s going to be another decade of US Open golf on Fox.