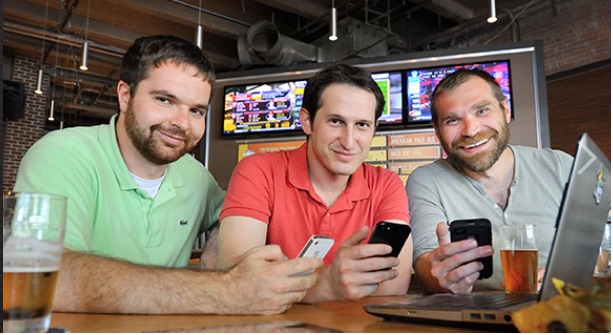 DraftKings, one of the top daily fantasy sites in the country, has a link on the footer of every page of its website that simply states “100% Legal.”

Per reports in the Wall Street Journal and New York Times late Wednesday, the FBI and the United States Department of Justice might be challenging that claim. From WSJ.com:

The U.S. Justice Department and the Federal Bureau of Investigation are probing whether the business model of daily fantasy sports operators violates federal law, according to people familiar with the matter.

FBI agents from the Boston office have been contacting customers of DraftKings Inc. to ask them about their experiences with the Boston-based company, one person familiar with the matter said.

Reports indicate the inquiry, in its preliminary stages at this point, began after news broke of a DraftKings employee winning $350,000 on rival DFS site FanDuel. That news led to all sorts of wild “insider trading” accusations, which has now led to an FBI probe.

Much of this leads back to that “100% legal” claim. Three times the DraftKings site assures users the service is legal. First in big, bold, money-colored letters, stating unequivocally that DraftKings is “operating in full compliancy with Federal and State Laws.” Second, under the company’s “5 great reasons to play fantasy sports on DraftKings,” reason number “ONE” is simply “100% Legal.” I’m not sure their grammar is as legal as their game claims to be, but that’s hardly a federal offense. 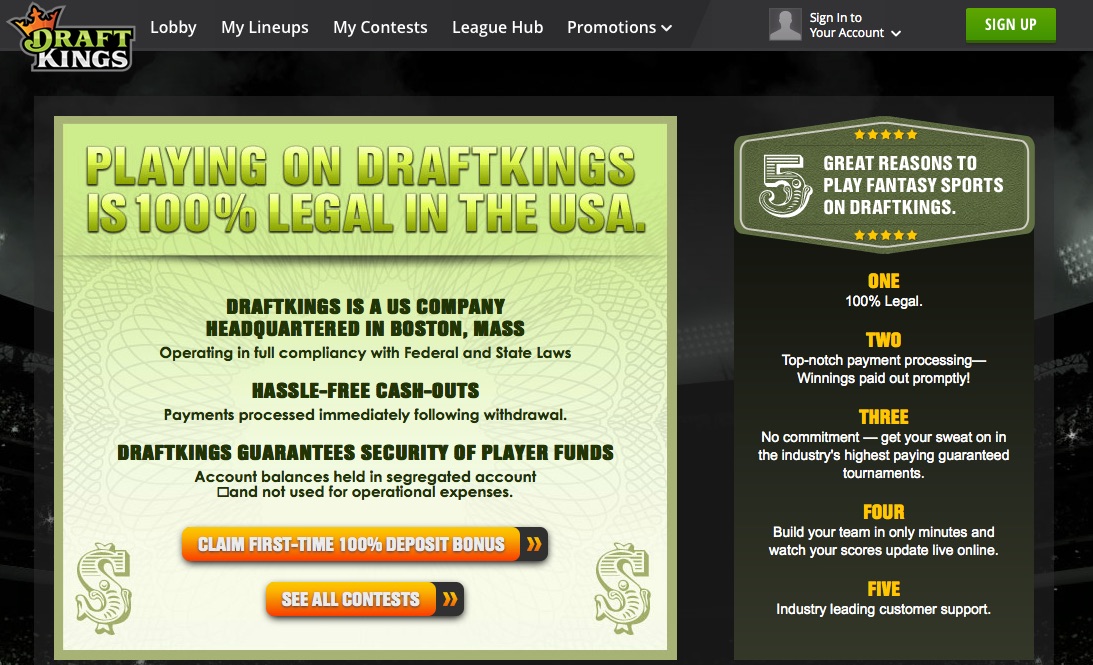 The last reason, placed near the bottom of the page, could be why DraftKings is in trouble with the feds.

WHY IS IT LEGAL?

The legality of daily fantasy sports is the same as that of season long fantasy sports. Federal Law and 45 of the 50 US States allow skill based gaming.

Daily fantasy sports is a skill game and is not considered gambling.

Now seems like a good point to stop and check in with the New York Times.

The players said that they were interviewed by agents from the bureau’s Boston office, who seemed to focus primarily on DraftKings, a Boston-based company. They also said that agents were examining whether the site encouraged and accepted deposits and bets from states where the contests were prohibited.

The information under review includes a post by Jon Aguiar, an executive in charge of developing high-volume fantasy players, on a public thread informing players how to deposit funds and play in contests in states and countries where the games are prohibited.

This is the greed that will be the daily fantasy world’s undoing. Both DraftKings and FanDuel could have quietly motored along this NFL season and made millions upon millions of dollars through a growing list of subscribers and regular players. Instead, both companies created an arms race to see which could spend more money on advertising, thereby throwing in the face of sports fans and regular television viewers just how much money they must have to spend on outreach and acquisition.

Does the bookie on the corner have a blinking neon sign that tells people where to find him? People who want to gamble—yes, it’s gambling—will always find a way, and while DraftKings and FanDuel continue to climb on top of each other to get every last DFS wanna-be into their system, the rest of the world has sat back and watched that neon sign flicker to the point where the government is probably going to shut the whole damn thing down.

Why would DraftKings be so brazen as to put an entire page on its site claiming the games are “100% Legal” and then post ways for prospective clients who live in the 10 percent of the country where it’s not legal to circumvent the law?

You had 90 percent of the country! That wasn’t enough?

DraftKings released a statement on Wednesday, taking full responsibility for putting not only their company but the entire DFS industry in this situation. Oh, no, wait, they blamed the media:

“It is entirely predictable that the government would follow up on the misleading reports about our industry. We have no knowledge of the specifics of any federal investigation but strongly disagree with any notion that our company has engaged in any illegal activities,” DraftKings said in a statement. [USA Today]

Part of the reason why daily fantasy is currently considered legal is because, as the DraftKings website points out, it is a skill game and not a game of luck. How that differs from online poker—banned on a federal level for more than four years but increasingly legalized on a state level—no one can answer.

Why the daily fantasy sites continue to smack us in the face with advertising in the wake of these on-going scandals is just as puzzling as that.

Regardless, what’s truly amazing is how the DFS industry has been able to flood the market while straddling that line of being a game of skill. Per Sports Business Daily, the skill it takes to win in daily fantasy is limited to very few participants.

DFS affords a huge advantage to skilled players. In the first half of the 2015 MLB season, 91 percent of DFS player profits were won by just 1.3 percent of players.

See, a game of skill, and not gambling! Now everybody give them all your money!

Only, when it turned out that some of that 1.3 percent worked for other daily fantasy sites, the whole foundation of this thing started to crack. Whether or not it crumbles may be up to the FBI and DOJ.

Washington lawmakers want the House of Representatives to hold a hearing on the legality of daily fantasy, wondering if the industry should be more closely regulated or—like poker—totally destroyed.

Per Politico.com, one of the biggest proponents of a hearing is Representative Frank Pallone of New Jersey, who comes from a state where the federal government recently denied the ability to legalize sports gambling in the state’s struggling casinos.

Part of the reason why the state of New Jersey doesn’t have sports gambling is because some leagues—including the NFL—fought against it. The NFL, per Politico, is now lobbying House members to avoid a hearing into DFS, a huge sponsor of its sport.

After learning of Pallone’s push, the NFL’s D.C. office — which recently hired a onetime aide to former House Majority Leader Eric Cantor (R-Va.) — began contacting House members to try to ward off a hearing, according to another House Energy and Commerce aide. The NFL is reeling from other confrontations with Congress on issues ranging from player safety to domestic violence. A league spokesman did not comment for this story.

Asked about the league’s reaction, Pallone slammed the NFL for its “hypocritical” stance, saying it only furthers the need for Congress to take a closer look.

It’s also important to remember DraftKings was funded in part by NFL owners, including those who head the New England Patriots and Dallas Cowboys, the NFL’s two tent pole franchises.

This is all horrifically intertwined, and terribly ugly. It comes as no surprise, then, the NFL is near the center of it.

Many Americans have no problem with the notion of daily fantasy—FanDuel CEO Nigel Eccles recently said that 57 million Americans play daily fantasy, “including many legislators“—and yet day after day we find ourselves talking about whether or not DFS business practices are ethical, or even legal.

Many Americans would like the government to stay out of this completely. Legalize everything. But until they do (if they ever will) there needs to be some sliver of hope that the major DFS companies realize their brazen full-steam-ahead approach could kill everything for everyone.

Someone needs to slow DraftKings and FanDuel down. Clearly it won’t be the NFL. It won’t be the users. Sadly, it may be the FBI and DOJ who are the only ones able, or willing, to do it.