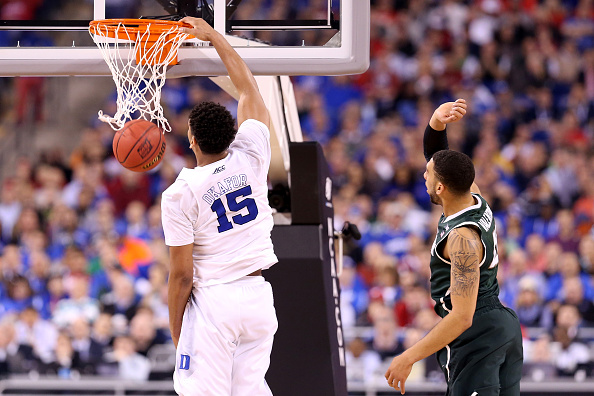 Don’t feel too sorry for the Turner/CBS conglomerate in not getting their dream final of Kentucky-Duke.  While that game would have likely popped a massive number and set various records, it’s very likely that based on the tournament thus far Wisconsin-Duke is still going to be a big winner.  That’s because the Final Four continued a great tournament in the ratings department, setting even more high watermarks for the Turner/CBS partnership.

First, the Kentucky-Wisconsin late game set a new record for the most watched college basketball game in the history of cable television – 22.6 million viewers among TBS, TNT, and truTV.  Incredibly, that number beat out last year’s title game of 21.2 million.

Both Final Four games were well up from last year as the 2015 edition of the NCAA Tournament continues to draw the best numbers in years.  Here’s the announcement from Turner/CBS:

Turner Sports and CBS Sports’ exclusive coverage of last night’s NCAA Tournament National Semifinal – Duke vs. Michigan State and Kentucky vs. Wisconsin – across TBS, TNT and truTV reached 41.7 million total viewers (watched all of part of coverage) for an increase of 24% over last year, based on cumulative ratings information via Nielsen Fast Nationals.  The Kentucky/Wisconsin game averaged 22.6 million total viewers (up 39% vs. 2014) to become the most-viewed National Semifinal game telecast in 19 years and the most-viewed college basketball game in cable television history.  Last night’s Kentucky/Wisconsin telecast peaked with an average of 28.2 million total viewers and a 15.7 U.S. HH rating from 11-11:15 p.m. ET. The telecast delivered a 12.4/23 U.S. HH rating/share, up 35% over 2014.

The NCAA Final Four doubleheader generating an average of 18.9 million total viewers, up 35% over last year and the most-viewed National Semifinal coverage in 19 years. The corresponding 10.5/21 U.S. HH rating/share is up 31% vs. 2014.

Duke/Michigan State averaging 15.3 million total viewers for a 31% increase over last year and the highest viewershipfor the game window in 10 years. The telecast’s 8.7/19 U.S. HH rating/share is an increase of 26% over 2014.

The NCAA Tournament averaging 10.8 million total viewers through the National Semifinals to register the most-viewed tournament coverage in 22 years and a 6% increase over 2014. This year’s 6.7/14 U.S. HH rating/share is also up 6% vs. 2014.

Just how insane is that Kentucky-Wisconsin number?  To put it into further perspective, these are the sporting events it beat out from the last year:

To add to the good news on the television side, the online streaming at March Madness on Demand is up 15% versus last year as well.

If it’s close at the end, Wisconsin-Duke should draw a terrific audience on Monday night to continue what has been a barnstorming tournament this year.  The NCAA Tournament is pretty much guaranteed at this point to produce great ratings because it’s reached cultural event status in this country.  And with this year representing a perfect mix of early upsets and blue bloods contending for the title, it’s about all the networks could ask for… even if they didn’t get that Kentucky-Duke final.