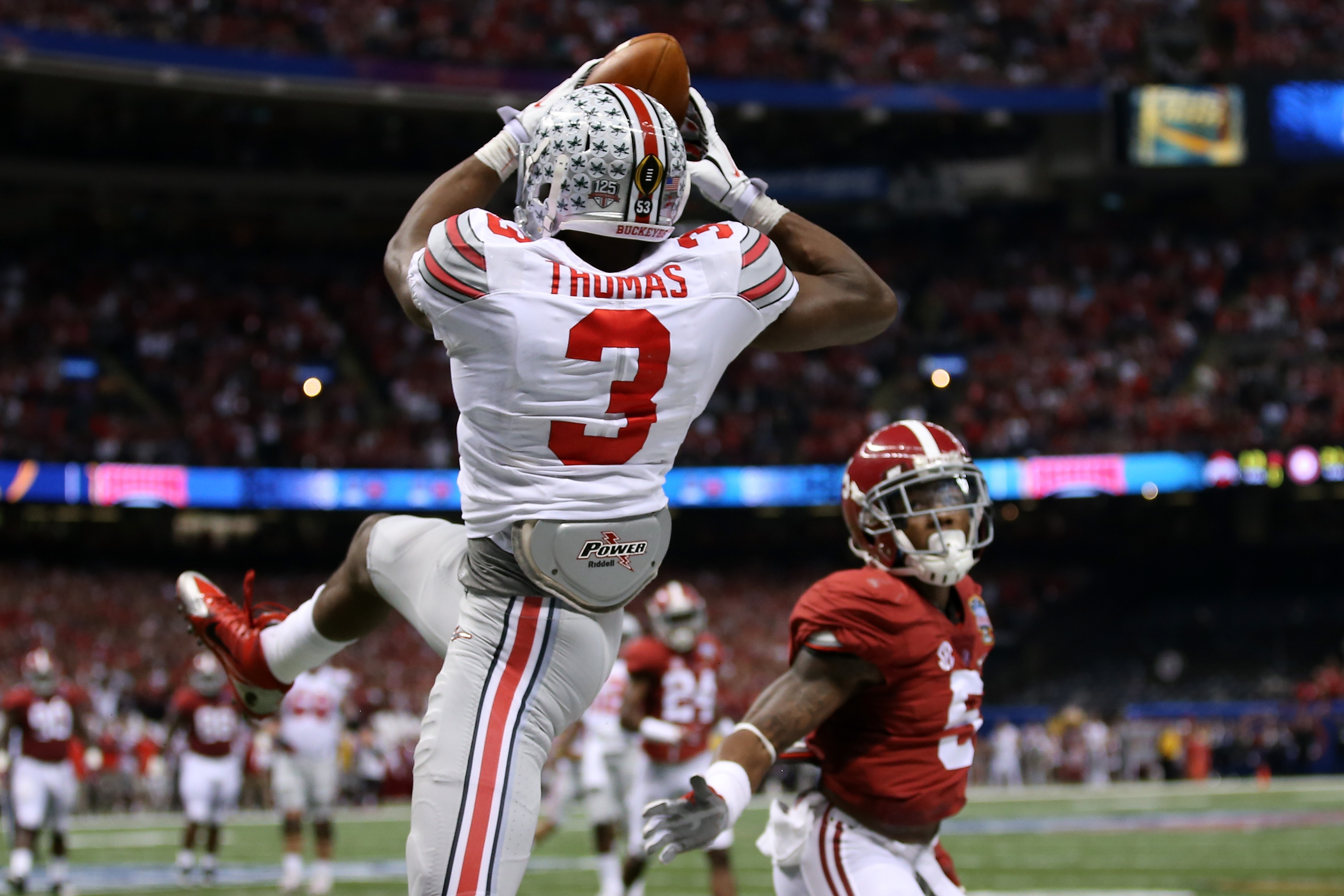 ESPN’s second go round with the college football Megacast happens for the national championship game between Oregon and Ohio State.  Bristol has released the gameplay for the Megacast and there are some scheduling changes from last year’s lineup and some new additions that will be worth checking in on during the game.  If you’re a sports media wonk, this is a night you’ll want to have the remote handy to bounce around and view all the different options at your disposal.

I think it’s safe to say you’ve never had more ways to watch a game than you will on Monday night.  Here they are…

Want no extra bells and whistles and just the normal production you get every week?  The mothership will have Chris Fowler and Kirk Herbstreit in the booth with Heather Cox and Tom Rinaldi on the sidelines.  It’s Fowler’s first title game since taking over from Brent Musburger.

This is a welcome change from last year.  The critically acclaimed Film Room featuring ESPN analysts and coaches breaking down the game in real time is moving from ESPNEWS to ESPN2. The excellent Chris Spielman and Tom Luginbill return and will be joined by coaches Dan Mullen (Mississippi State), Mike Riley (Nebraska), and Pat Narduzzi (Pitt).  It should be noted that Narduzzi coached against both Oregon and Ohio State while defensive coordinator at Michigan State this year.  If you’re not watching the main telecast, this is definitely the alternate feed I’d recommend.

The nicest thing to say about this feed is it’s certainly eclectic.  Last year ESPN2 aired the party room feed hosted by Michael Smith and Jemele Hill.  This year ESPNU is going with the “Random ESPN Analyst Generator 1000” machine and pumping out one of the most random assortments of talent ever assembled – Jay Bilas, Aaron Boone, Julie Foudy, Barry Melrose, Mark Schlereth and Michael Wilbon will all appear.  To be honest, I’m just disappointed Michael Ballack won’t be there.

ESPNEWS – Off The Ball

The younger brother of the Film Room sounds very intriguing, but might be more for the ultimate X’s and O’s diehards.  This channel will zero in on the 1 on 1 matchups away from the ball and in the trenches.  Bob Wischusen hosts with analysts Kevin Carter, Matt Millen, Jason Sehorn and Matt Stinchcomb, and Amani Toomer.  Again, this has potential for some very informative analysis that should be worth checking out for at least a few plays.  But it may be too granular for widespread viewing.

ESPN Classic – Sounds of the Game

For those of you that enjoy muting announcers (and I’m guessing there’s some of you out there since you’re visiting a site called Awful Announcing) this feed will feature the ambient noise from inside the stadium without commentary.  Put yourself in JerryWorld without spending the thousands of dollars on travel and tickets and having Chris Christie creepily hug you.

Same as the TV version.  Mike Tirico and Todd Blackledge will be in the broadcast booth with Holly Rowe and Joe Schad on the sidelines.

This has the potential to be a big hit with the two respective fanbases.  ESPN3 will be offering both an “Oregon Radio Call” channel and an “Ohio State Radio Call” channel with the team’s home announcers, presumably with the audio and video properly synced.  (You know you’ve tried to do that at least once at home with your DVR.)  The Oregon and Ohio State channels will have the main game feed plus focused cameras on the coaches and star players from the respective teams.

Watch the National Championship Game as though you were flying a small drone above the offensive huddle for the entire game.

First of all, this may be the most appropriately sponsored thing in ESPN history.  Nothing says “Taco Bell” like a bunch of hungover college students in a strange place.  I don’t know why you’d want to watch the student sections, cheerleaders, and bands during the actual game.  But if you do, here you go.  Come to think of it, this is pretty much all Fox did when they televised the BCS.

A completely different option than all the ones above.  Command Center is a unique feed that will have a split screen of live game actions, immediate replays, head coach cameras, and enhanced statistics.  Also, the feed will have the radio call from Mike Tirico and Todd Blackledge if you’d like to listen to them call the game.

So there you have it.  TWELVE different ways to watch or listen to the 2015 National Championship Game in college football.  Unfortunately, none of them involve Brent Musburger making prop bets throughout the game.  There’s always next year I suppose.  In all seriousness, the Megacast is one of the coolest ideas ESPN has ever come up with and it should be a real treat for fans tuning in on Monday night.