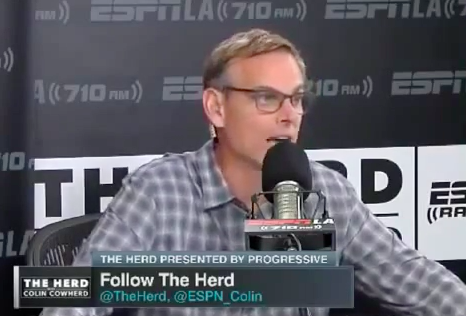 ESPN unceremoniously dumped Colin Cowherd late Friday afternoon, one week before what was reportedly scheduled to be his final day at the network.  It’s the worst kept secret in sports media that once Cowherd’s contract is done at ESPN, he’ll make the move to Los Angeles and Fox Sports in a mega-million dollar deal.

The repugnant nature of Colin Cowherd’s latest controversy revolving around his ignorant thoughts about Dominican baseball players has already been addressed in great detail across the sports world.  It wasn’t just blogs and social media that Cowherd managed to rile up this time, it was Major League Baseball and the MLBPA too.

The next layer of this story that goes beyond the comments themselves, and is uber-fascinating from a sports media angle, is the timing of ESPN’s decision to kick Cowherd to the curb on his way out of town and what it says about his past at ESPN, his future at Fox, and the competition between the two.

A history of enabling – Colin Cowherd’s teflon tenure at ESPN

ESPN’s decision to give Cowherd an extra week’s vacation was shocking to those of us who have followed sports media for any length of time for this reason – Cowherd has said a lot of offensive things in his career and ESPN has never done anything about it before.

Much like Skip Bayless, ESPN has always insulated Cowherd from any criticism.  For someone who tries to paint himself as so progressive, it’s amazing just how many regressive, stereotypical things Cowherd has said over the years, especially whenever he tries (and fails) to play amateur sociologist on the air.

It’s almost like Cowherd thinks he can get away with going so far out of bounds because of how smart he thinks he sounds saying it.  And why wouldn’t Cowherd think he could get away with saying anything on his radio program when ESPN has sat idly by and enabled him while he said the following…

His inhumane reaction to Sean Taylor being murdered in his own home:

“Sean Taylor, great player has a history of really really bad judgment, really really bad judgment. Cops, assault, spitting, DUI. I’m supposed to believe his judgment got significantly better in two years, from horrible to fantastic? ‘But Colin he cleaned up his act.’ Well yeah, just because you clean the rug doesn’t mean you got everything out. Sometimes you’ve got stains, stuff so deep it never ever leaves….Just because somebody cleans the rugs doesn’t mean there aren’t stains.”

“I want to know the truth. I want to know the details. It’s not pretty? I don’t care, I’m a grown-up. I can handle not pretty. A lot of people can’t in the media, a lot of people can’t, ‘Oh, wah wah wah, sensitivity, he’s a great person, wah wah wah.’ Hey, I don’t care, that’s fine, he died, let’s get to the truth. We’re all about the truth. We always say on this show, we’re not always good, we’re always honest. Just give me honesty.”

“J Wow’s 37-second Yo dawg look at me I’m the man [dance], and his wild, out-of-control style, everybody else is buying his stock, and it told me all I need to know. He’s gonna end up on the Iverson, Francis, Starbury [side]: great stats, nine All-Star teams, never play with good smart players and an elite head coach. He’s gonna drive people nuts.”

His judging of John Wall and attacking him over the fact that his father died when he was 8 years old:

“Let me tell you something: I’m a big believer, when it comes to quarterbacks and point guards. Who’s your dad? Who’s your dad? Because I like confrontational players, I don’t like passive aggressive. Strong families equal strong leaders. Talent? Overrated. Leadership? Underrated. And you can say, well, Colin, can you just go out and say anything crazy and get people to e-mail. That’s not the point. You wouldn’t e-mail if I was an idiot, because you wouldn’t listen to the show. You listen to the show because we make good points.”

And if the “who’s your dad” angle isn’t enough for John Wall, there’s his implication that Roger Goodell is a father figure to black NFL players:

“Oh, black players are getting harsher sentences.  Here’s something that’s interesting if you look at basic numbers or metrics in this country.  71% of African American men, no dad at home.  No disciplinarian.  Fathers are often the louder voice, the disciplinarian.  Many of those kids don’t grow up with a dad… the NFL is one of the first places where many star players finally see discipline.  Finally have an authoritative male figure, buck stops here, I will make all the calls, you will not get an opinion.”

And it’s not just Cowherd’s racial commentary that has been so troublesome.  Here’s another list of people Cowherd has offended:

Wow, Colin Cowherd has made a lot of different people groups angry over the years!

When you see all of these comments put together in one place, Cowherd’s latest remarks basically calling out Dominican people for what he believes is their lack of intelligence is just par for the course for him.  He’s made millions of dollars through his baseless commentaries, so why should that change now?

ESPN did the right thing in finally disciplining Cowherd for stepping over the line, but they deserve no real plaudits for this decision.  If ESPN really cared about the network’s “values” as they said in a statement on Friday, they would have done something to stop Cowherd’s harmful and hurtful rhetoric years ago.  They never did.

ESPN created this beast.  And ESPN should take responsibility for a history of enabling that led to Cowherd’s declaration on Dominicans to be delivered on their airwaves.

What does Fox do with Colin Cowherd now?

What about the future, though?  With Cowherd finished in Bristol, the attention now turns to his widely-reported move to Fox Sports.

This is a public relations nightmare for Fox.  They might as well be hiring Rush Limbaugh after his comments on black quarterbacks.

Not only is Cowherd now persona non grata in the sports media world, he’s angered one of Fox’s biggest rights partners in Major League Baseball and their players association with both condemning Cowherd publicly.  As an aside, we finally found the one thing that can unite a league and its players union: a distaste for Colin Cowherd.

Given Horowitz’s history in bringing the plague that is First Take upon the masses, maybe he and Fox are loving all the publicity for their new hire.  But has Cowherd stepped so far over the line that he’s now radioactive?  Does his future role diminish in any way?  With Cowherd still under contract at ESPN, could Fox even consider pulling their offer from Cowherd because the dam has finally burst given the above history?

Those questions about his future may be the reason why Cowherd actually offered a sincere apology for once after originally blasting outlets daring to cover the story earlier in the day.

I did not intend to offend anyone w my comments. I realize my choice of words was poor and not reflective of who I am. I am sorry.

At best, Cowherd is damaged goods before his splashy reveal at Fox.  At worst, it could call his future into serious doubt.

Putting these first two pieces together, it’s easy to see why ESPN finally decided to do something about Colin Cowherd.  He’s not their problem anymore, he’s Fox’s problem.

ESPN suspending Cowherd and basically stamping "RACIST" on his forehead as he leaves for a rival is a special kind of devious. I love it.

The timing couldn’t be more convenient and opportunistic for ESPN.  They get to take the high road publicly and wag their finger at Colin Cowherd and trumpet their commitments to diversity and tolerance and respect for all people and so on and so forth.  But they also get to stamp a big scarlet letter on their biggest rival’s biggest talent acquisition.

Just a few days ago, Cowherd was opining about his wonderful relationship with ESPN management that allowed him to talk about his goodbye on the air, (an opportunity never afforded to Bill Simmons, by the way).  Now ESPN has effectively fired him a week before he quit.

ESPN could have disciplined Cowherd a number of times before, but they chose to do so only when it might have a tangibly negative impact on Fox, not themselves.

Sending Colin Cowherd home a week early is the easy way out for ESPN.  But beneath the surface, it’s a devilishly clever offensive strike against Fox Sports in the ongoing battle for sports media supremacy.