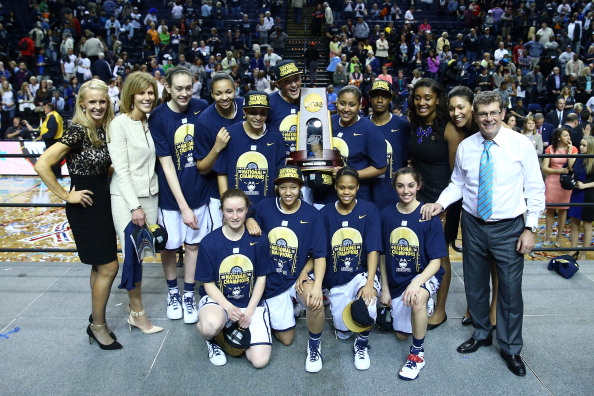 With first-rate professionals Kevin Negandhi, Kara Lawson, and Rebecca Lobo in the studio, ESPN has respected the intelligence of viewers during the 2015 Women’s NCAA Tournament. Showcasing Lawson and Lobo, the two best women’s analysts not named Doris Burke, has marked yet another step forward in the continuing evolution of ESPN’s women’s college basketball coverage. Lawson, unlike former studio partner Carolyn Peck, has grown as an analyst over time. ESPN’s studio commentary on women’s hoops has never been better.

In this respect, ESPN has built up its brand and reputation. It clearly takes women’s college basketball seriously, and viewers have been able to benefit on the content side of the equation.

The next step for ESPN is to enable viewers to see more of the action on the first weekend of the NCAA tournament. What happened Monday night was, to borrow a tennis term, an “unforced error.” Quite ironically, the way ESPN (specifically in this case, ESPN2) handled the late window of Monday games was all too reminiscent of how the WorldWide Leader treats major-tournament tennis on many occasions.

There remains, in ESPN’s treatment of niche sports — women’s basketball and tennis both qualify as such — a persistent belief that showing the biggest names is the only real way to generate ratings. I wrote about ESPN’s coverage of Wimbledon last year at Bloguin, and in that article, you’ll notice one particular detail: ESPN frequently showed the ends of blowout sets or blowout matches involving stars, rather than take viewers to competitive matches with lesser-known players.

To the dedicated sports fan, showing a multi-game event — such as any tournament, the NCAAs and Wimbledon both being prime examples — should force broadcast TV outlets to ship viewers wherever the action is hot. This is what CBS always needed to do before Turner joined its men’s NCAA tournament coverage and enabled four separate channels to cover games with staggered start times (TruTV, TNT and TBS in addition to CBS).

ESPN, being the WorldWide Leader, should be the best outlet in the world in terms of getting viewers to the games or portions of games tha matter most. Yet, at Wimbledon, ESPN stuck with a match between Roger Federer and a tomato can late in the third set of a blowout. Similarly, this past Monday night, ESPN2 confounded many college basketball fans who were scoreboard-watching two close games but couldn’t see them on TV.

Three games occupied the late window for the women’s NCAA tournament on Monday night: Connecticut — the Federer of women’s hoops — played Rutgers; Louisville played South Florida; and Arizona State faced Arkansas-Little Rock. Near the eight-minute mark of the second half, UConn led Rutgers by 34 points, 77-43. When the ESPN2 broadcast came back from the under-eight media timeout, it showed a few highlights of Louisville-USF and UALR-Arizona State, but it then went back to the UConn game and carried it through to the end.

Louisville-USF and UALR-Arizona State were both very close throughout the final seven minutes of regulation, but for many ESPN2 viewers, there was no permanent switch to either one of those tight and compelling contests… not until the UConn game — a 91-55 final — had ended.

The way these games were handled makes it clear that ESPN has a problem with “star treatment” in niche sports. With that having been said, Monday night’s broadcast decisions by ESPN also showed why “star-centric programming” (geared toward UConn in women’s hoops, much as it’s geared toward showing Federer and Rafael Nadal in tennis) should at least bring about an adjustment in how ESPN carries various tournaments and other events in which multiple games are going on at the same time.

Let’s take these issues one at a time: It would be nice to think that ESPN can avoid an excessive focus on names (in any sport) and devote more energy to covering the whole of a sport itself. This is the kind of coverage grown-up sports fans want. Whenever ESPN takes viewers seriously (think of the 2014 World Cup), viewer response is profoundly and widely positive. When ESPN clearly abandons coverage of the sport for a focus on celebrity or ratings-magnet entities (such as UConn women’s basketball to the exclusion or diminishment of lesser-known programs), mature sports fans notice.

Everyone knows why ESPN2 stuck with UConn, and it’s the same reason it sticks with Federer in a 6-1, 6-1, 5-2 match that’s completely devoid of drama: The market research shows that the casual sports fan is more likely to watch the brand-name team or athlete. However, ESPN is in a position to lead by example. If ESPN devoted itself to covering the sport and not just its stars, we’d have been able to see much more of Louisville-South Florida and UALR-Arizona State, two far more interesting games with far more exciting stretch runs. ESPN could choose to be a trend-changer and pace-setter in sports. It instead makes decisions which reflect a continuing captivity to what will bump up ratings points. That’s one issue.

If ESPN is going to stick with star-centric women’s college basketball programming at the expense of showing closer games between more obscure schools, it can at least then put more women’s NCAA tournament games on ESPNU and maybe even ESPNEWS. Yes, games were available on ESPN3, but it’s obviously not the same as being on over-the-air television.

Keep in mind here that with eight games on a Monday, ESPNU did wind up carrying one women’s game, a 6 Eastern clash between Florida State and Florida Gulf Coast. ESPN2 then went to a four-game window at 6:30 (Maryland-Princeton, North Carolina-Ohio State, Tennessee-Pittsburgh, and Stanford-Oklahoma) before the three-game window at 9.

CBS and Turner have four channels, one for each men’s NCAA tournament game in the rounds of 64 and 32. ESPN could introduce four-channel coverage if it wanted to, but let’s be fair to ESPN and ask only for two-channel coverage, perhaps ESPN2 and ESPNU. Just having one additional channel for the first weekend of the women’s NCAA tournament would have given viewers at least one of the two close games in the late window on Monday night. Staggering start times by 30 to 45 minutes — something CBS and Turner have been able to do a lot more of since their men’s NCAA tournament partnership began — would also make the ends of each individual tournament game more accessible to viewers.

There are so many viewer-friendly things ESPN can still do as far as women’s NCAA tournament coverage is concerned. The quality of analysis and studio commentary is already excellent. Women’s basketball fans are hoping that in future years, ESPN can at least add channels to its coverage plans… if it’s not going to move away from the star-centric philosophy it continues to use in a number of the niche sports it covers.