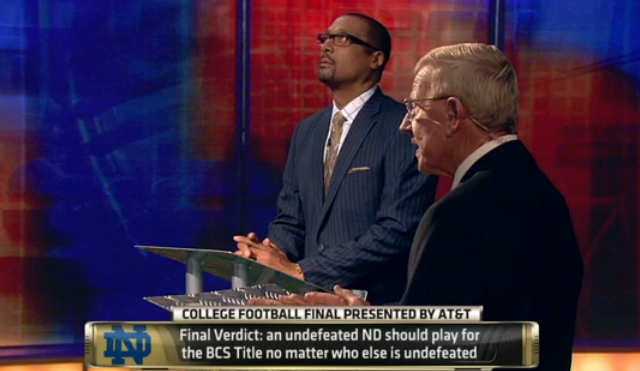 ESPN’s college football coverage, from first to last whistle, from the bowl games to recruiting, is first class.  Bristol covers the sport with the full depth of resources available to the self-proclaimed worldwide leader.  In fact, one could argue that of all the sports at ESPN, they just may cover college football the best.

The depth in talent is truly extraordinary – Chris Fowler and Kirk Herbstreit, Brad Nessler and Todd Blackledge, Dave Pasch and Brian Griese, Sean McDonough and Chris Spielman, Joe Tessitore and Brock Huard, etc.  Then you have the established vets like Brent Musburger and up and comers like Tim Tebow and Greg McElroy working at the SEC Network.  Longtime ESPN personalities like John Saunders and Lee Corso.  The tradition and experience of College GameDay and now the College Football Playoff.

But there’s always been just one little red X on an otherwise perfect exam sheet – the combination of Lou Holtz and Mark May.  The Vaudeville act of these two longtime college football analysts has turned sour in recent years as they’ve become a circus.  May’s credibility issues have long been documented and raised their ugly head during the lead up to the national championship game.  I don’t know if ESPN enjoys having their analysts drowned out with boos, but that was the case with May and Ohio State fans in Dallas.  For his part, Holtz has said before the season this would be his last year, but that hasn’t been confirmed.

The promotion of Rece Davis to hosting College GameDay has been well earned if only for the fact that he’s had to serve as arbiter to this charade for way too long.  Much like Cari Champion sitting between Skip Bayless and Stephen A. Smith, Davis deserved so much better than judging fake debates between these two curmudgeonly analysts.

Honestly, who thinks this is good or compelling television?  Watching old men have a fake courtroom argument about football and then stamp their feet like little children when they don’t get their way?

For whatever reason, perhaps under the Limbaugh-esque philosophy that hate-watching is better than not watching at all, College Football Final continued in this capacity.  But with Davis moving on and Holtz’s future uncertain, it’s finally time for ESPN to bring their central recap show up to par with the rest of their coverage.

And it’s not like there aren’t plenty of options for Bristol.  They can finally send May out to pasture and replace him with Joey Galloway, who was a pleasant surprise in the studio during the playoff.  If they wanted to keep the chemistry thing going, they could bring David Pollack and Jesse Palmer to Bristol.  Or better yet, they could promote someone like Tim Tebow or Greg McElroy to the mothership and provide them an opportunity to better serve and enlighten and entertain fans.  As far as the host goes, Adnan Virk would be an excellent choice.  All of those would be better than the current setup now.

Perhaps the most intriguing option though is doing something totally different with CFB Final.

Highlight shows are largely a relic of a foregone time.  Why not expand on the success of the Film Room megacast feed and bring the coach’s clicker to ESPN.  With the likes of Tom Luginbill and Chris Spielman and the scores of other former players and coaches at ESPN’s disposal, there’s enough expertise to go around.  They could even bring in Matt Millen as a regular given he was such a pleasant surprise in his Megcast role.

College football really lacks a signature X’s and O’s show a la NFL Matchup.  This could be ESPN’s chance to provide us with one.  And given the diversity and complexity of the X’s and O’s in college football (much more vast and interesting than the NFL) the richness of content would be awesome. Imagine a show each night that takes the biggest plays or games and breaks them down in this way.  If ESPN can do it in real time… why not later that night?

ESPN has a chance to go in a much healthier option here next season and finally remove the one blemish on an otherwise pristine college football resume.  With so many options at their disposal, hopefully they choose one that forgets the fake debates and focuses on serving the fans in the best way possible.  Whatever they do, just leave the judge’s robe in the closet.