This summer, ESPN will have parted ways with three of their most notable on-air personalities: Bill Simmons, Colin Cowherd, and Keith Olbermann.

Now imagine ESPN is a sports team, let’s just say the 2015 Cleveland Cavaliers for the purpose of this exercise.  Now imagine that this year’s Cavs lost LeBron James (Bill Simmons), Kevin Love (Colin Cowherd), and Iman Shumpert (Keith Olbermann) this summer.  And they didn’t add anyone else.  The team would be devastated.  They’d be back to lottery faster than you could say Dellavedova.

And that’s exactly where ESPN finds themselves at the moment, down arguably their biggest star (Simmons), one of their most important contributors across radio and television (Cowherd), and another player in the starting lineup (Olbermann).

And you know what?  ESPN will be just fine.

Back in 2013 when ESPN welcomed prodigal sons Keith Olbermann and Jason Whitlock back home after wandering away for a number of years (and later Michelle Beadle in early 2014), it represented a seismic shift in strategy from the corporation.  For so long, there was only a one way ticket out of Bristol, Connecticut with no return trip.  ESPN has been content to see its biggest names walk away and find employment elsewhere.  Dan Patrick (NBC), Rich Eisen (NFL Network), Erin Andrews (Fox), Rachel Nichols (Turner), and the list goes on and on and on.  As the best example of this policy, Olbermann was famously said to have “napalmed” the bridge back to town.  Conversely, ESPN’s forays into sports media free agent sweepstakes have been relatively few and far between.  (Rick Reilly anyone?)

And yet, in an effort to bolster ESPN and prepare for competition with Fox Sports 1, ESPN made the rare move to bring back these very large personalities.  Olbermann was given a late night timeslot on ESPN2 at 11 PM ET to provide yet another buffer to FS1’s new flagship program Fox Sports Live.  Whitlock was snatched away from Fox Sports right before FS1 launched and given his own vanity site.  The results varied.  Olbermann’s eponymous show was met with critical acclaim, but bounced around timeslots before settling in the late afternoon.  While he has given many influential commentaries, he was suspended by the network over a Twitter fight with Penn State students and it appears his dogged criticism of Roger Goodell ultimately made ESPN execs a bit too uncomfortable to keep him.  Whitlock’s venture turned into an unmitigated disaster for ESPN as he was removed from The Undefeated before it even officially launches.

Instead of wheeling and dealing with big names and big personalities over the years, ESPN has taken the position that the network is the biggest star.  Think of the most influential, most watched, most popular ESPN personalities at the moment.  They’ve either been at ESPN forever – Vitale, Berman, Ley, Buccigross, Levy, Wingo, Mike & Mike, etc.  Or, ESPN got them early on in their careers and made them into huge stars – Van Pelt, Czarniak, Bomani or bigger stars than they already were – Kornheiser, Wilbon, Le Batard… and yes, Bayless and Smith.

For the last two years, ESPN and President John Skipper seemed to stray away from that strategy by splashing the cash for the likes of Olbermann and Whitlock and Beadle to come back.  There were also a number of big dollar contracts dished out to keep the likes of Chris Fowler, Rece Davis, Jay Bilas, Kirk Herbstreit, Scott Van Pelt, and others in the fold.  But now with ESPN given a mandate from on high at Disney to slash costs everywhere at the network, Bristol will return to a tried and true mantra: nobody is bigger than the four letters.

When Keith Olbermann and Dan Patrick turned the 11 PM ET edition of SportsCenter into The Big Show, the pairing became a cultural phenomenon.  How did ESPN react?  After Olbermann and Patrick each left the network, ESPN no longer put established pairings together for SportsCenter lest they create the same chemistry and success that Olbermann and Patrick did.  If I can put my Darren Rovell hat on for a moment, because it wasn’t about the individual, it was about the brand. 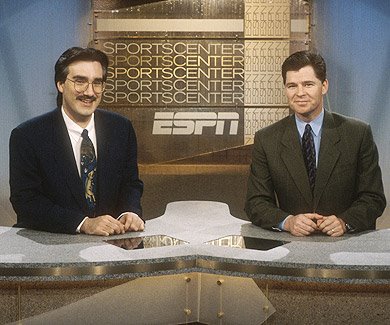 As Patrick said in Jim Miller’s best-seller Those Guys Have All The Fun:

“It was all about who had control. I don’t think they liked making stars out of us. As Keith and I were told one time, “We don’t need another Berman.” Chris had established himself as unique and passionate, bold and fun, and I think they were worried that Keith and I were sort of levitating above everybody else.”

Former ESPN anchor and current Boston Bruins announcer Jack Edwards affirmed the belief inside and outside of Bristol:

The prevailing idea was that the network was much more important than individuals. In many ways, Chris Berman is their greatest nightmare, because he is a fabulously talented, extraordinarily hardworking, obsessed, dedicated, funny man who relates directly one-on-one to everyone who’s ever watched him on television. They have done everything in their power to prevent anybody from getting that kind of power again. Their greatest corporate nightmare is to need someone more than that person needs ESPN.

And now in just the last three months, we’ve seen ESPN willing to return to that philosophy in being willing to let Simmons, Cowherd, and Olbermann leave unabated.  No other network would dare do the same, but ESPN can be confident that their bottom line won’t be hurt by stars exiting Bristol because they’ve been down this road many times before.

How will ESPN cope with losing Simmons and Olbermann and Cowherd?  Easily.  They’ll create new stars to fill their shoes.

Simmons’ gifts across a number of platforms is one-of-a-kind in today’s sports media, but ask yourself how big his star would be without ESPN.  Would his podcast subscriptions or Twitter followers be in the millions?  Highly doubtful.  Love him or hate him, Colin Cowherd is a rare talent that can carry a national radio show on his own.  But who was he before he was given the slot after Mike & Mike on ESPN Radio?  Before he came to ESPN, Scott Van Pelt was best known for his work on the Golf Channel.  Now he’s one of the most well-known and most popular sports media members working today.

For sure those individuals have gotten where they are today by their merits, but how many people at ESPN are just waiting for that same kind of opportunity to hit it big?  What’s stopping ESPN Radio hosts like Bomani Jones or Dan Le Batard or Freddie Coleman from becoming a bigger ratings success than Cowherd if they were given the morning slot?  What about bringing a talented duo from one of ESPN’s affiliates onto the national stage like Waddle & Silvy from Chicago?  Any of those individuals could fill that slot capably and do so without weirdly obsessing over John Wall and repeating all the infuriating things Cowherd has said over the years.

Olbermann was given free reign to do something few others at ESPN are afforded the opportunity to do in expressing some non-corporate opinions in his monologues.  I’m sure there are a number of folks at ESPN that could give a poignant, thought-provoking essay on a wide range of topics.  What about giving that same Olbermann platform to Jeremy Schaap or Adnan Virk or Sarah Spain?  Would there be any discernible dip in viewership or quality content?

Simmons will definitely be the most difficult person to replace at ESPN and Grantland, but what if those highly sought after promotional spots on ESPN.com were offered to Zach Lowe or Brian Phillips?  What’s stopping one of those highly talented Grantland writers from stepping up to the plate?

ESPN has a bench that is filled with more talented individuals than maybe every other network in America combined.  Yes, these big name personalities will bring more notoriety to their new homes and take some viewers and listeners with them.  But nowhere near enough to make ESPN worried, because A) there’s enough people at ESPN waiting on deck and B) the four letters are still powerful enough to draw the masses.

When Erin Andrews was brought in to host Fox College Saturday and compete with College GameDay it got trumped 25 to 1 in ratings and lasted just one year.  Michelle Beadle’s time in purgatory at NBCSN was met with a similar fate.  The most memorable thing about The Crossover was Beadle’s Twitter snark about former co-host Dave Briggs, not their viewership that hovered below 40,000 people.  Fox Sports Live has only truly competed with SportsCenter when they have a massive lead-in from a live event.  Otherwise?  FS1’s flagship show often fails to hit six figure viewership and make a blip on the sports radar.

If cable ecosystem truly transforms, @espn believes you will pay them > $30/month for their live events, not their personalities.

Sports fans will stick with ESPN, even when all these big names go elsewhere, because it’s going to take at least a generation to change their viewing habits.  As long as ESPN keeps most all of the biggest sporting events in America, sports fans are going to see them as their default destination.  And odds are that new stars will be made with the multitudes that Simmons, Olbermann, and Cowherd leave behind.