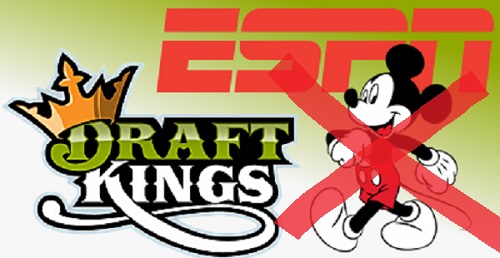 Most discussion of awkward ESPN business relationships revolves around the NFL and college football, but daily fantasy is quickly becoming a key component there too. After making substantial progress towards a $250 million deal to invest in DraftKings earlier this summer, ESPN backed away from that, but elected to still sign a massive exclusive advertising deal with the company . Now, with DraftKings and FanDuel under fire in a possible insider trading controversy, ESPN appears to be moving away from some of that integration as well. Outside The Lines returned to the main ESPN network Tuesday, and did so with a splash, focusing on the various controversies around daily fantasy. As part of that broadcast, Bob Ley announced that ESPN will continue to air daily fantasy ads, but will be ditching daily fantasy sponsored segments on TV going forwards:

Ley on how ESPN will still do ads but no sponsored content in shows https://t.co/yBmb02alnG

The overall OTL broadcast took some criticism for ignoring key aspects and terminology of the crisis, but having perhaps ESPN’s most-lauded journalism program look into daily fantasy is interesting itself regardless of how well they did it. It also fits in with some of the other criticisms of daily fantasy that have been coming from inside ESPN, such as Scott Van Pelt’s questioning of how these games aren’t considered gambling by regulators. Still, it’s this revelation of changing ESPN policies that may be the most notable thing to emerge from the OTL segment.

This decision by the Worldwide Leader to move away from sponsored daily fantasy content on their shows is a substantial and notable change. As outgoing ombudsman Robert Lipsyte (who they still haven’t replaced, which is really unfortunate during this daily fantasy saga) remarked last December, there is no ideology at ESPN other than the bottom line, and cutting back on sponsored content is likely to hurt that bottom line in at least the short term. The thinking must be that daily fantasy’s growing controversial enough and receiving enough pushback (from everyone from viewers to congressman) that moving away from the most-blatant promotions of it may help the network in the long run. As former ESPN employee Colin Cowherd pointed out recently, Bristol and its corporate parents at Disney have often been very conservative on the gambling front, so sponsored segments were a departure from the norm for them in the first place.

It’s going to be interesting to see where ESPN goes from here. Will they reduce other sponsored content, such as Matthew Berry’s mentions of DraftKings, the DraftKings promos in ESPN The Magazine and the joint ESPN/DraftKings contests, or will cutting sponsored segments on TV be their main move? Regardless of what else they do, continuing to air ads shows they’ll still have some connection to DraftKings (as you’d expect; that advertising deal is for a reported $250 million, and it seems unlikely that ESPN would walk away from all of that in an era of budget cuts). The question is just how closely connected they’ll be.

UPDATE: DraftKings said in a separate statement that they pulled their advertising from ESPN on Tuesday. We’ll see if that’s temporary or something that might last.

Clarification: An ESPN spokesman says Matthew Berry’s columns “are editorial content and not included as a part of the deal.” So Berry’s extensive DraftKings mentions aren’t covered through ESPN’s deal with DraftKings. Berry has since written that DraftKings has paid him personally:

Full disclosure: I am a paid spokesman for them. I’ve filmed a few commercials for them, I’m going to continue to tweet for them, make appearances on their behalf and there will be opportunities for people to play against me on their site in the future. It’s a deal I agreed to for one very specific reason:

That doesn’t mean Berry was specifically paid to mention DraftKings in his column, though, so this may have been pure editorial content. It’s interesting that that first column didn’t contain a disclaimer or disclosure that Berry was paid to endorse DraftKings, but that has been corrected with him addressing it in the second one. For what it’s worth, he also wrote that he’s going to reduce the specific daily fantasy mentions in his future columns.

I wanted to address this, but starting next week we will be back to the format you’ve come to expect with a long, fun intro and then the normal Love/Hate. For those that DO play daily, understand that pretty much everyone that is a “love” or “hate” is also someone I would use in daily. But for each position, I have put a small section of players whose prices on DraftKings I particularly like. So … a compromise hopefully everyone can live with. And if not, well, there are lots of other great fantasy articles here on ESPN.com. I am positive your needs will be met by one of my colleagues.