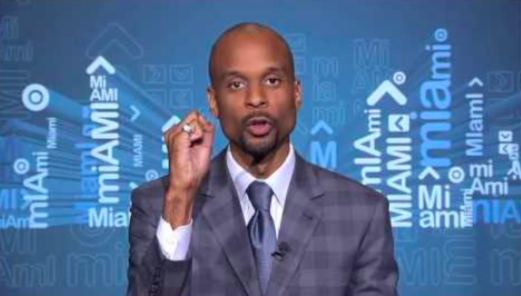 With Dan Le Batard taking over Colin Cowherd’s former time slot from 10 a.m. to 1 p.m. ET, ESPN Radio needed to fill the 4 to 7 p.m. spot in its weekday schedule. Sports Illustrated’s Richard Deitsch reported two weeks ago that Bomani Jones’ show, currently airing from 9 to 11 p.m., would get a bump up to the afternoon drive-time position, and that is indeed what will be happening.

Beginning next Monday, Sept. 28, The Right Time with Bomani Jones will broadcast out of Miami on ESPN Radio from 4 to 7 p.m. ET Monday through Friday. He will continue to co-host Highly Questionable with Le Batard, which airs at 4:30 p.m. on ESPN, overlapping with Jones’ radio show as it once did with Le Batard’s. The new time slot could affect Jones’ ability to appear on Around the Horn, but he expects that to be worked out.

we expect to have time. gotta see how it goes, but i expect to be there. https://t.co/ePiKInzyHM

“Moving to an earlier time slot is certainly a show of confidence from ESPN that I appreciate,” Jones said in a statement issued by ESPN. “I look forward to sharing what we do at night with a larger audience. I’m also looking forward to getting off work at 7 rather than 11!”

Following Jones’ show will be an all-new program for the national ESPN Radio audience, though familiar to those who listen to the Grantland network of podcasts. As first reported by The Big Lead, Jalen & Jacoby — starring the former NBA star and current ESPN analyst, along with Grantland writer and producer David Jacoby — which has been a podcast since 2011 is moving to the radio, occupying the 7 to 9 p.m. ET slot. The show will broadcast out of Los Angeles.

“Jalen and I are flattered by this opportunity and we will continue to do what has made our podcast successful, being utterly unfiltered and unprofessional,” said Jacoby. “I can promise we will have fun and I can promise that we will do everything in our power to entertain and educate our audience. I can’t promise that Jalen won’t sing. The guy really likes to sing.”

Going from a once-a-week podcast to broadcasting on the radio five days a week will presumably be quite a change, but ESPN obviously feels the pair can take their show nationally and keep it fresh on a daily basis. Production staff will surely help with that output, supplying topics, guests and the like. It’s up to Rose and Jacoby to make sure the voices so popular with a podcast audience stay distinct on a daily radio program.

“We truly appreciate the opportunity to GIVE THE PEOPLE WHAT THEY WANT five days a week on our new ESPN radio show,” Rose added. “After winning the Academy of Podcasters Awards in July for best sports podcast this year, our fans can expect a radio show like no other.”

Jorge Sedano had been filling the 7 to 9 p.m. slot on ESPN Radio. No word yet as to what happens with him and that show, though Jones’ former spot from 9 to 11 p.m. will obviously have an opening now.