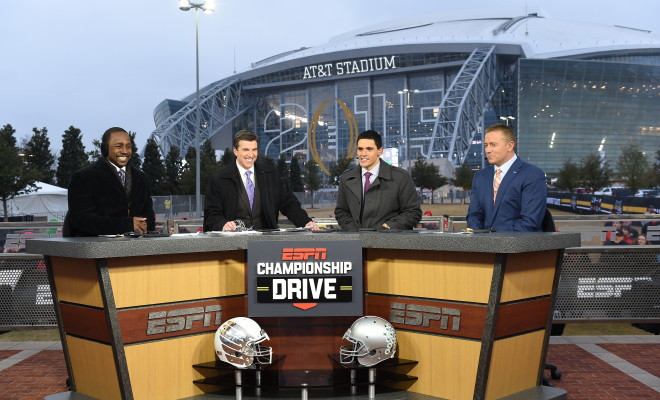 Throughout the college football offseason, we’ve been telling you about various changes to the ESPN studio lineup. Whether it was Rece Davis being named to replace Chris Fowler on College GameDay, Lou Holtz leaving or an entirely new cast for College Football Final, the Worldwide Leader has decided to make wholesale changes to its lineup.

Now we have the official announcement on the new hosts for each studio show. One interesting development is that Joe Tessitore will no longer be calling games on Saturdays. He’ll host SEC Nation on SEC Network from various game sites on Saturday mornings, then fly up to Bristol, CT in time to host College Football Final after all the games are done. Now this does not necessarily mean the Law of JoeTess, his knack for calling exciting games is done for season. We’ll find out if he’ll continue calling games in the near future.

Other than Davis joining College GameDay, there are no other changes to the show. Kirk Herbstreit, Lee Corso, Desmond Howard and David Pollack remain on the program and Tom Rinaldi and Samantha Ponder will stay as contributors.

Here is the full college football studio lineup on the networks of ESPN:

The next college football announcement from ESPN will be its play-by-play/analyst teams and that is expected sometime next week.