When we talk about the competition between ESPN and the likes of Fox Sports 1 and NBCSN, we always say that it will take more than a generation for those other networks to even think about competing on a level playing field with Bristol.  ESPN’s dominance in the sports world is just that entrenched, and just that difficult to overcome.  Perhaps this statistic is the best example of that philosophy.

With the first college football playoff now in the history books, the two semifinals and final gave ESPN the Top 3 programs in the history of cable television.  And it also happened to give ESPN a clean sweep in the Top 20 of all-time.  The Top 7 events all come from the BCS and College Football Playoff since 2011.  All of them also happen to be football games. 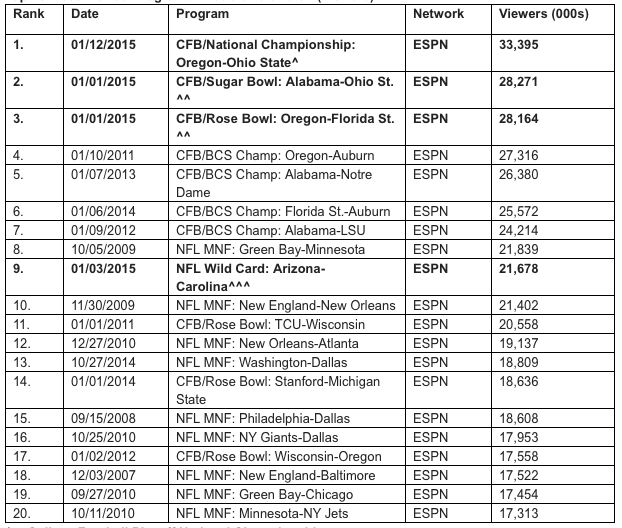 The #21 program in cable history is, of course, an episode of the Walking Dead.  While you could equally make the argument that this list is really about the popularity of football in this country, it’s hard to imagine FS1 or NBCSN ever cracking this list any time soon.  Of cousre, ESPN is paying tons and tons of dollars to televise Monday Night Football and the College Football Playoff, but these numbers are exactly why.  And as long as ESPN has those rights packages, they’ll be able to draw these super-sized audiences.  And as long as ESPN draws these super-sized audiences, they’ll be able to draw more revenue from advertisers and cable fees.  And as long as ESPN is drawing more revenue, it’s going to be difficult for any network to try to play catch up.