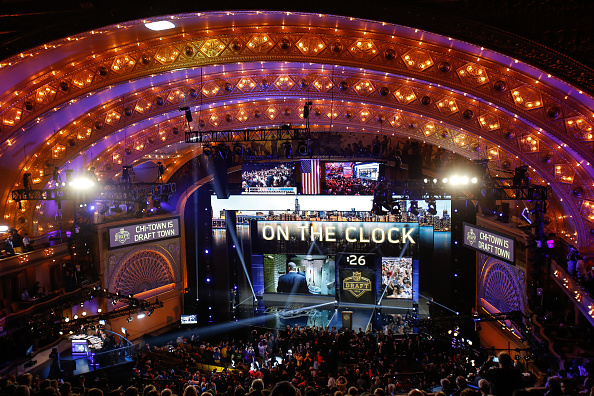 ESPN has been televising the NFL’s annual selection meeting longer than some of us have even been alive.  Over those decades, ESPN’s coverage has seen a multitude of changes in personnel and an incredible technological evolution to deliver seemingly any bit of information possible about each draftee.  It’s also seen some elements roughly stay the exact same as they were in the 1980s.  It’s that tension that’s seen in our grades for ESPN’s coverage of the first round of the 2015 NFL Draft.

Louis Riddick – After the withdrawl of Ray Lewis, former NFL personnel man Louis Riddick was placed in a tough spot in being suddenly promoted to the main set. Once Lewis wasn’t going to be a part of night one, it would have been easy for ESPN to stick with only Kiper and Gruden as in years past. But, Riddick impressed from the beginning and gave a fresh perspective from the organization doing the drafting. Riddick has been a promising analyst at the network with his background, energy, and on-camera presence, but this was by far the biggest assignment of his television career and ESPN’s biggest gamble of the night. Still, Riddick performed admirably given the circumstances showing the draft is one of the nights where the clichéd musings of an ex-jock aren’t necessary. His incisive analysis fit in nicely between Kiper and Gruden.

Production Truck – The highlight of ESPN’s draft coverage each year is just how polished and prepared the network is with all of the highlight packages and analysis delivered on every draft prospect.  Game highlights, combine footage, Pop Warner film, you name it, ESPN can find it.  This can even extend to the radio side where ESPN Radio’s broadcast had pre-taped Mel Kiper hits ready to go for each player drafted.  ESPN is second to none in this department when it comes to the draft.

Jon Gruden & Mel Kiper – This grade is a nod to the stability and chemistry the two have developed over recent years. Kiper is going to be Kiper, consistently showing why he is the single name most synonymous with the draft for the last 30 years. Gruden seemed more muted than in years past, perhaps because the two high-profile QBs were already gone after the first two picks and there weren’t any more signal callers to salivate over. But, even Gruden was restrained in it putting Winston or Mariota in the Hall of Fame before their name was called.  Gruden’s new look with the glasses gets an A though.

Chicago – Opinions were mixed when the draft was initially moved out of New York to the Windy City. However, the city proved to be quite the capable host, treating the event with all the pomp and circumstance of a spring Super Bowl. The shifting of scenery from indoors to outdoors was novel, if not bordering on the unnecessary. Although, the outdoor acoustics did help to muffle the booing of Don Goodell. Still, the energy and ambiance showed the draft need not be married to NYC indefinitely.