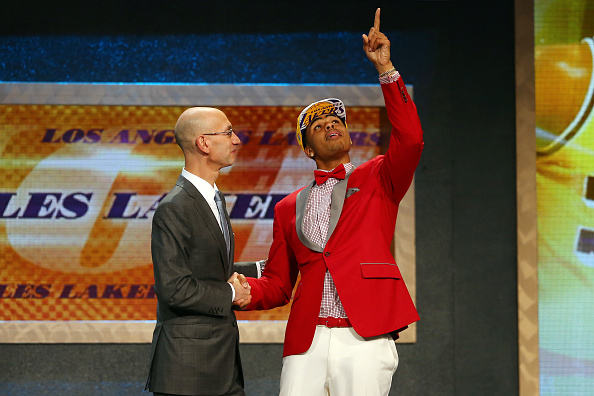 Bill Simmons has been gone from ESPN for a month now, but the first time that I really missed his presence in Bristol was Thursday night during the NBA Draft.

That admittedly sounds like a strange thing to write.  Live television was never the strength of The Sports Guy (see the tumultuous end to his NBA Countdown career) even though his expanding television portfolio was a growing part of his ESPN empire and is likely to be a significant aspect of whatever he does next.  Nevertheless, the NBA Draft was by far his best event as an analyst.  At the very least, he added some color and broke up the monotony with his observations and outside-the-box analysis.  He got in fights with Doc Rivers, he celebrated Celtics picks with fist pumps, he doled out some jokes, he made the NBA Draft more entertaining.

For the 2015 version, ESPN replaced Simmons with Jay Williams to join former running mate Jalen Rose, Jay Bilas, and Rece Davis.  Without Simmons, ESPN’s coverage on the main set was fine.  Just fine.  There really wasn’t anything spectacular or captivating about it and there wasn’t anything infuriating or polarizing from it.  Throughout the evening, the conversation from the main set more or less blended together, especially once the draft got beyond the lottery.  Rece Davis played traffic cop, Jay Bilas offered his scouting reports and analysis, Jalen Rose gave the NBA comparisons (with some peculiar moments we’ll get to later), and Jay Williams was a solid link between the two.

Somehow, the NBA Draft works at a much faster, yet more relaxed pace than their counterparts at the NFL.  With only 5 minutes between picks in Round 1 and 2 minutes in Round 2, there’s only so much time for ESPN to hit their marks and it really doesn’t allow for much in-depth conversation.  After a player is drafted you got the video breakdown from Bilas, an NBA comparison from Rose, maybe a comment from Williams or some discussion on set and then it’s on to the next pick.  There might be some words from Tom Penn or Fran Fraschilla on their specialities or an interview with Shannon Spake, but there wasn’t much time for the crew to really dive in to a topic in-depth.  That led the feel of the telecast to bleed and blend from one pick to the next beyond the star players.

But on that other hand, for as much scrutiny as ESPN and NFL Network’s draft coverage receives, there’s much more of an easygoing vibe when it comes to the NBA Draft.  Davis doesn’t offer the same bluster as Chris Berman as host and does his job artfully without much histrionics.  Similarly, Bilas isn’t the intense guru that Mike Mayock or Mel Kiper is on the football side as much more even-keeled in delivering his analysis with a cheeky one-liner or two before the show has to go on.  Williams and Rose are there to complement Bilas for the most part and there was a much looser atmosphere overall.

In the end, ESPN’s NBA Draft coverage on Thursday night was pretty decent.  As always, the production, graphics, and video packages were top quality.  The broadcasters acquitted themselves fairly well for the most part.  But there just seemed to be that little something missing and the rhythm of the NBA Draft is tailor made for Simmons’ trade basketball knowledge, crazy trade machine theories, and quick wit.   I guess sometimes you don’t know what you got till it’s gone…

– Interviewing draftees can often be reduced to an exercise in futility.  At its best it’s the same two questions asked five different ways.  At its worst it’s Deion Sanders.  It’s not an easy job, but Shannon Spake handled it very well in her first draft for ESPN.

– If you were in the middle of the Venn Diagram and one of those weirdos who was watching the draft while having Twitter open and seeing WojBomb after WojBomb tipping picks like me, it was obvious that ESPN’s television production was far behind.  The on-air group spent an entire segment breaking down Tyus Jones to the Cavs after the news dropped that he was getting traded to Minnesota.  This isn’t a huge deal for those people who were only watching the draft without the inside information.  However, in real time for those informed fans it looked a little silly for Jalen Rose to suggest LeBron James was pulling the strings on the Jones pick when he was already gone to the T’Wolves.  ESPN should at least find a way inform their talent of the transactions so they don’t end up getting contradicted within seconds.

– If there was one person on the ESPN set who offered the most head-scratching comments, it was Rose.  Some of his player comparisons were a bit off the wall (Wally Szczerbiak is Sam Dekker?) and at times his comments were the complete antithesis of his analysis on the ticker.  At one point he said Orlando needed a knock down shooter while his needs for the team below stated “shot blocker.”  Rose also tried to strangely fit in some kind of last word before a lot of commercial breaks.  It was just plain odd.  If there’s someone on the ESPN set who might not be the best fit for the draft, it’s the former Michigan man.

– Not to go all curmudgeonly old sports columnist on you, but ESPN’s analytics segment on D’Angelo Russell with Tom Penn was strange.  How in the world did ESPN come up with a 15% chance of Russell being a superstar and a 41% chance of being a bust?  How can that be quantified?  What’s the context?  What does it even mean?  ESPN offered no explanation of for those stats and merely threw out some numbers along with the word “analytics” and thought it would sound impressive.  It didn’t.

– Fran Fraschilla International Basketball Savant may be my favorite renaissance move in all of sports media.  If Andre Iguodala can win Finals MVP, Fraschilla should win it for ESPN’s NBA Draft coverage because without his perspective on international players, there would literally be nowhere else for the network to turn.  Fraschilla’s best moment was his story about Nikola Milutinov’s basketball career launching after bullies threw him into a pool as a kid.  Put that on his Emmy tape. Fran Fraschilla deserves an Emmy tape.

– And finally, even though it happened before the draft, this was the funniest thing that came across our desk all night.  The Cavs clearly needed some extra backcourt depth during the Finals, you know…

"Co-hosts Pablo Torre and Bomani Jones are extremely talented, and they helmed what we believed was a smart and nuanced show. Unfortunately, not enough people agreed with us."

"However bad and biased and unfair and illegal and cheating the referees are, we have to be better closing games."

Darn those unfortunate TV and online hits that allow him to have the job to begin with!

"I told my wife I wasn't going to do this because I didn't want to have to look at that for the next three or four years!"

Canadian fans who want to watch the Blue Jays are faced with subscribing to two streaming services.

"Co-hosts Pablo Torre and Bomani Jones are extremely talented, and they helmed what we believed was a smart and nuanced show. Unfortunately, not enough people agreed with us."

"However bad and biased and unfair and illegal and cheating the referees are, we have to be better closing games."

Darn those unfortunate TV and online hits that allow him to have the job to begin with!

"I told my wife I wasn't going to do this because I didn't want to have to look at that for the next three or four years!"

Canadian fans who want to watch the Blue Jays are faced with subscribing to two streaming services.