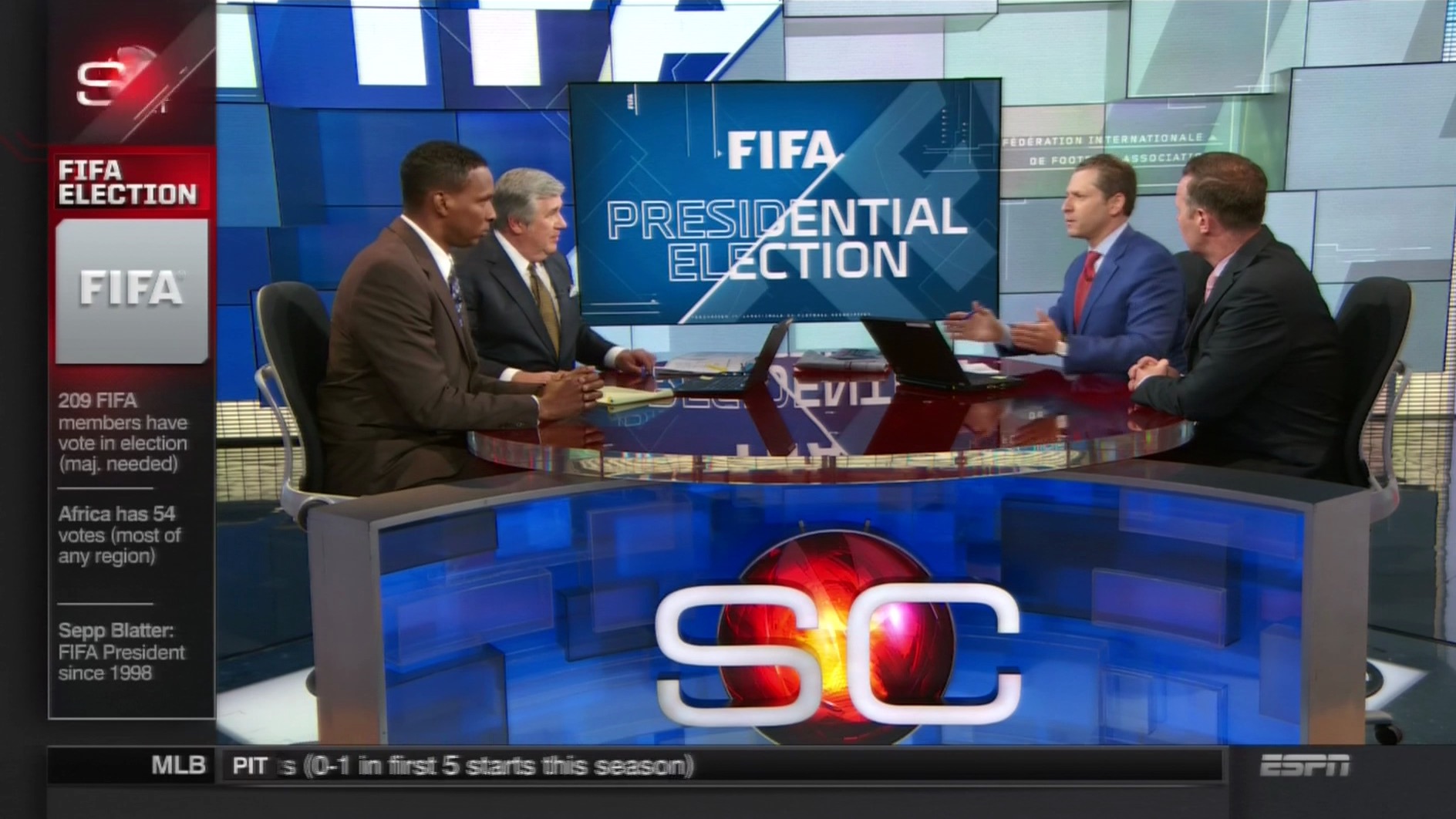 Hours after Bob Ley of ESPN angrily ripped up a propagandist press release on ESPN’s air as part of the network’s in-depth coverage of the FIFA Congress and election for FIFA president, none of the other major sports networks in America that trade in the beautiful game had given the FIFA vote any coverage at all.

Sepp Blatter won FIFA re-election around 1:15pm ET when Prince Ali bin Al-Hussein conceded after the first round of voting, but it was hours before that decision when ESPN took the reigns on television coverage in America, miles ahead of the competition.

Ley, Jeremy Schaap and ESPN’s panel of experts were deep into the FIFA coverage before any of their cable competitors even seemed to know the vote was taking place.

ESPN at its best with the #FIFAElection coverage this morning.

Finally, as the morning turned near noon, Fox Sports put the FIFA stream on FS2, with a crawl saying the voting result will be shown live on FS1 when it happens. 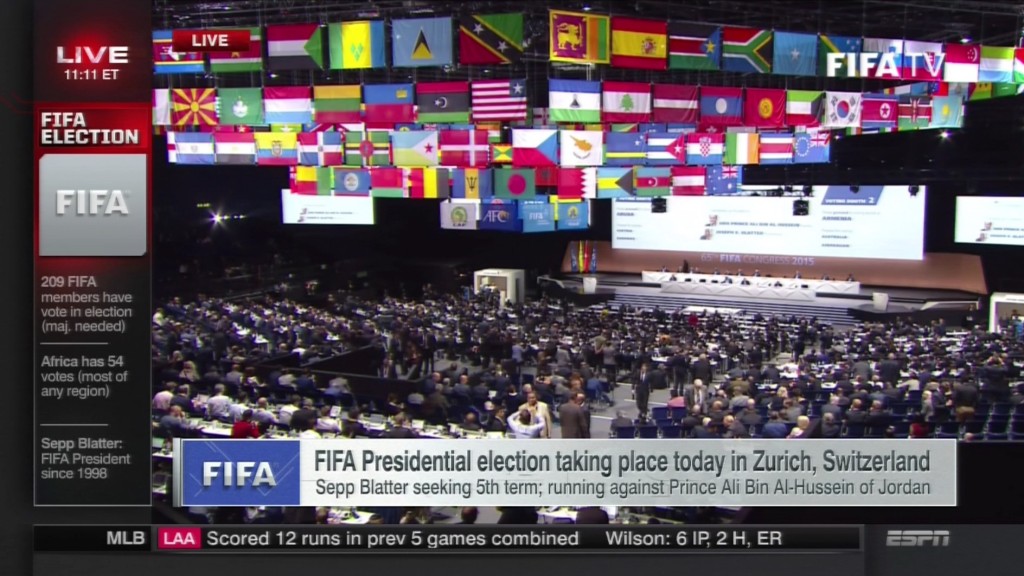 ESPN was the only sports network in America to air the speeches by Prince Ali and incumbent president Blatter, done so via the same YouTube feed the rest of us were watching from FIFA TV.

Normally, a day like today isn’t that big of a deal. Blatter has had a stranglehold on the presidency for decades, so televising the vote has often been more for ceremony than breaking news. But this week, with the scandal that has overshadowed everything else in the world of sports—and maybe the world as a whole—it’s amazing to see the lack of coverage from ESPN’s soccer competitors. 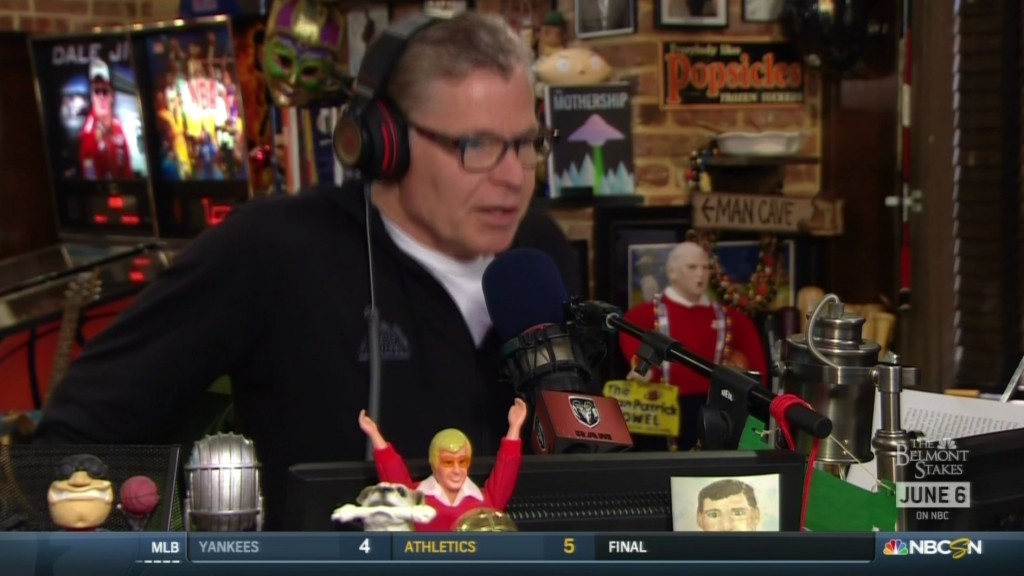 When I made the comment about NBCSN’s lack of coverage on Twitter, it was suggested the company doesn’t have the infrastructure to cover such an event from a journalistic perspective.

Really? This seems to be right in Josh Elliott’s hosting wheelhouse for NBC. And if he’s unavailable, where was Rebecca Lowe? Did she suddenly forget how to speak on television? Did she have car trouble?

Lowe has become the face of NBC’s soccer coverage and is a well-respected television presenter, certainly smart enough to navigate the FIFA election waters on the fly. And it’s not like this wasn’t planned for some time, so there’s no reason any of the networks should have been caught off-guard by the vote.

Why wasn’t NBC more prepared, even to throw Lowe in as a standing guest on the Dan Patrick Show, with updates about the election throughout his radio show and television simulcast. After the vote, ESPN showed Blatter’s comments while NBSCN is showing bass fishing.

If Lowe or Elliott were unavailable, I’d even take the Men In Blazers doing their Statler and Waldorf routine to the whole proceedings.

If NBC wants American viewers to think of them as the go-to place for soccer — and that’s certainly been the case on weekends during EPL season — this was a big miss for them.

Bigger, perhaps, only for Fox. 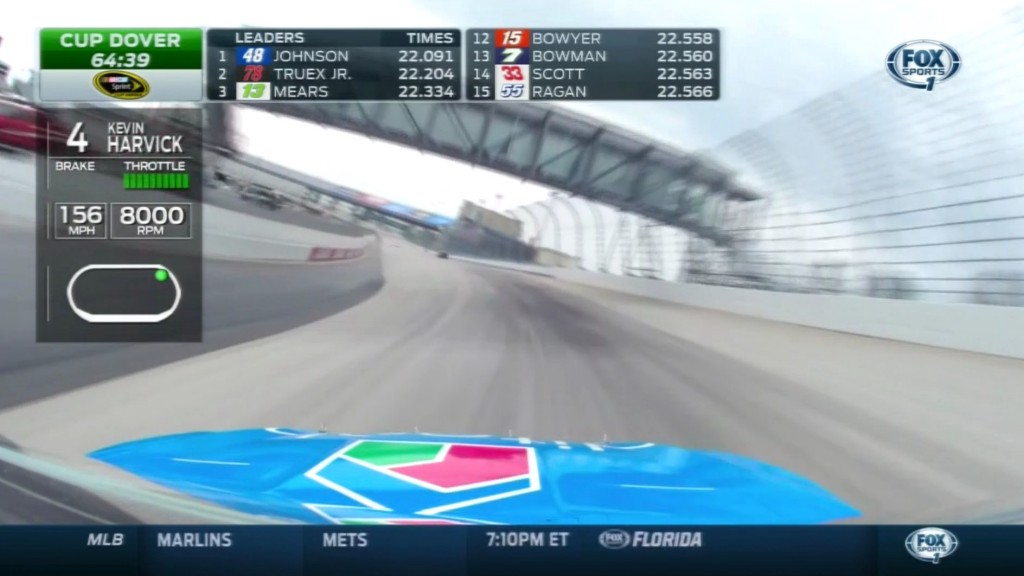 Fox is the television host of the next World Cup—starting in a week, by the way—and had more at stake with this FIFA election than any other American media company. Why did it take until nearly noon to throw the FIFA live stream on Fox Sports 2? Was it even relegated to FS2 only in response to the buzz ESPN was getting with its coverage?

NASCAR practice was on FS1. Practice.

Turn on FOX Sports 2 now for a LIVE look at the FIFA presidential election. Will Sepp Blatter win a fifth term? pic.twitter.com/FZCch76Qor

Why didn’t Fox wake up Rob Stone—tweeting along with us watching on the internet, by the way—and get him to host the coverage of this election? Why wasn’t Fox planning this coverage the entire time, regardless of the scandal? Again, if you are trying to bill yourself as the face of soccer in America, this is a must.

BeInSports’ lack of coverage confounds me even more. The fledgling network literally built on soccer coverage, and almost nothing else, was showing cycling—cycling!?!?—before cutting to coverage of the United States U-23 team playing in a non-FIFA sanctioned tournament in France that they presented on a 20 minute tape delay. For cycling!

All the networks have been playing catch-up to ESPN all day, with social media posts and haphazard coverage on secondary channels to show they’re at least trying a little.

Still, the opportunity to not only show ESPN they are willing to put up a fight in terms of world football coverage, but show American soccer fans there is another option outside of ESPN was right there for the taking today. ESPN won. Everyone else in sports media dropped the ball, even as news networks also aired live coverage.

Remember, ESPN didn’t have rights to this event from FIFA. They took a livestream and put it on their air via laptop—the same thing it took Fox over an hour to figure out how to do. Yes, the Worldwide Leader in sports was airing a live YouTube stream — and even got caught in an ill-timed buffer — while Fox Sports 1, NBCSN and BeInSports were nowhere to be found on the world football landscape. 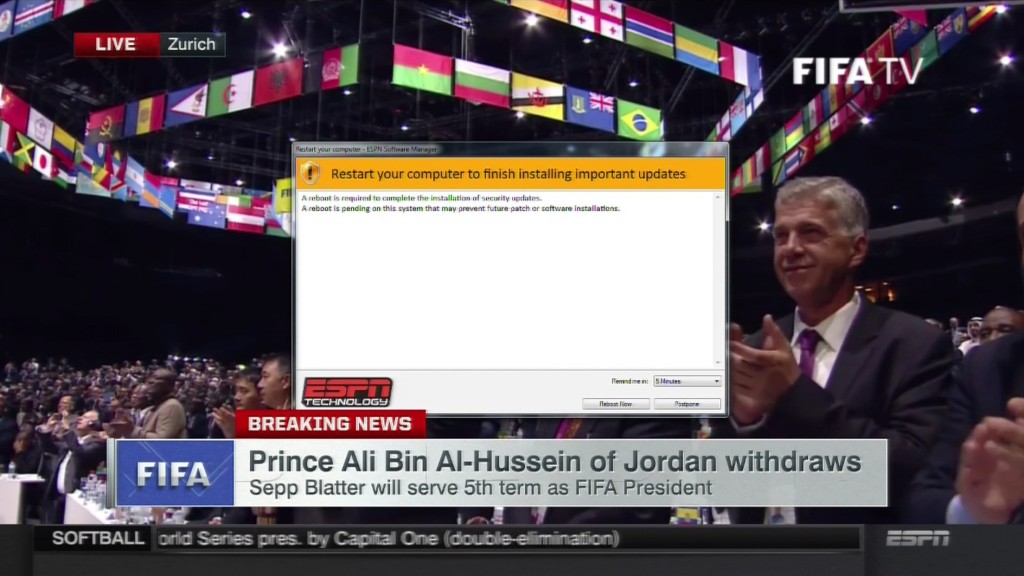 Is the idea of Stone sitting at a desk with Warren Barton, Alexi Lalas and Eric Wynalda going to get people to turn away from Ley and Schaap, Gab Marcotti et al at ESPN? Probably not, but if Fox added Grant Wahl to the show and tapped into the Sky Sports connection to get British journalists on the show, they would have shown American soccer fans they care.

If Lowe trotted out one of the Robbies or Kyle Martino to slam Blatter around a bit, it would have shown dedicated EPL fans in America that NBC is a place for more than just weekend footy coverage during the season.

Instead we got NASCAR practice, and cycling, and Dan Patrick, and bass fishing…and soccer fans looking for top-notch international sports coverage went back to ESPN, again.