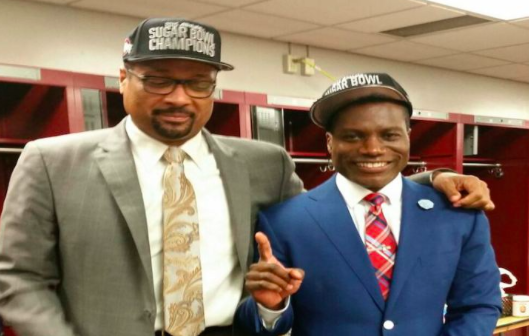 According to Sports Business Journal, ESPN is moving Mark May off College Football Final.

ESPN will reportedly name a new trio for the much-maligned program that once featured Rece Davis hosting fake grade school courtroom debates between May and Lou Holtz.  But with Holtz retired and Davis promoted to hosting College GameDay, ESPN has finally (thankfully) decided to go in a brand new direction for the show.  Adnan Virk will host and be joined by analysts Danny Kanell and Joey Galloway.  The trio will appear on both ABC and ESPN for halftime and postgame coverage.

As for May, you haven’t seen the last of him completely – he will reportedly link up with John Saunders and Mack Brown for a different show.  (Perhaps for ABC’s college football coverage as that’s where Saunders and Brown were stationed last year with Kanell.)  Regardless, removing May’s toxicity from one of ESPN’s flagship college football shows will be a gigantic breath of fresh air for college football fans as College Football Final is the weekly wrap-up show that most fans naturally gravitate towards.

May’s continued prominence as a college football analyst has highlighted the worst of ESPN the last few years – showcasing “look-at-me” personalities who troll, scream, and shout for attention and can’t be trusted to give a fair shake to viewers.  For ESPN’s sake, the network should hope these moves mean none of their analysts will get booed off the stage at the National Championship Game in 2016 and they can win back fans who abandoned the network’s studio coverage because of May’s antics.

And for the new faces of College Football Final, this opportunity represents a reward for consistent, high quality work.  Virk is one of the most talented anchors and hosts working at ESPN and has proven to be something of a super-utility man capable of hosting anything on the network – from Olbermann to Mike & Mike – with excellence.  Now he finally has the chance to be the permanent host of one of ESPN’s top studio shows in a move that is long overdue.  Galloway has been working as a game analyst for the network, but he really shined when moved to the studio in analyzing the College Football Playoff this past winter.  The one question mark might be whether or not Kanell can tone down the anti-SEC rhetoric that he leaned upon last year.  Aside from that, he’s a very good analyst who connects with the audience and has proven himself as more than just a college football analyst, subbing on ESPN Radio multiple times.  While not on May’s level of years-long trolling of Ohio State and other fanbases, Kanell should be cautious and learn from his predecessor on just how easy it is to take those feuds with fanbases too far and become the story himself.