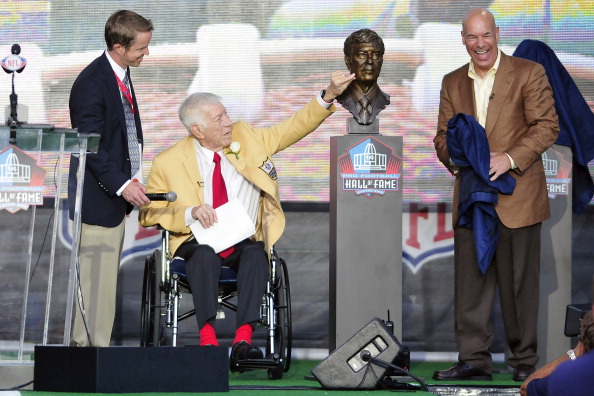 On Monday, Ed Sabol passed away at 98 years old. Sabol, the Godfather of NFL Films, changed the way the public viewed football forever when he started Blair Motion Pictures, all the way back in 1962. With Sabol’s passing, a generation who grew up watching the NFL through programs such as This Week in Pro Football and NFL Game of the Week all lose a titan of the industry.

Sabol was inducted into the Pro Football Hall of Fame in 2011 for his contributions to the sport. Without question, Sabol and his son, Steve, were the two most influential people in NFL history when talking about growth of the game. While Johnny Unitas and Joe Namath were superstars and icons for legions of children nationwide, it was Ed Sabol’s vision and dedication which brought those men to the pillars they stood upon.

“Through his determination and innovative spirit, Ed Sabol transformed how America watched football and all sports,” NFL commissioner Roger Goodell said in a statement, per ESPN. “Ed ignited the fire at NFL Films and was the Keeper of the Flame with a remarkable vision and dedication to telling the stories of the people who played, coached and loved the game.”

When Blair Motion Pictures bought the rights to film the highlight video for the 1962 NFL Championship game for $3,000, commissioner Pete Rozelle deemed the finished product the best football film ever made. Rozelle then contracted Sabol and his company to become the official film company of the league, thus being renamed NFL Films prior to the 1964 season.

Ed Sabol ran NFL Films until 1985 when he relinquished control to his Steve, who passed away from cancer in 2012. Throughout Ed’s run with NFL Films between 1964 and 1995, the company amassed 52 Emmy Awards. Since that time, the film house has continued to produce incredible series such as the award-winning America’s Game, which chronicles each Super Bowl champion with an hour-long production.

When the NFL’s history is brought up, one can immediately watch color film of all the greats from a multitude of angles. In many instances, whether it be a team highlight film or a Super Bowl documentary, the narration of the legendary John Facenda can be heard accompanying the pictures.

“We began making the game personal for the fans, like a Hollywood movie,” Sabol told The Associated Press before his Hall of Fame induction. “Violent tackles, the long slow spiral of the ball, following alongside the players as they sidestepped and sprinted down the field. The movie camera was the perfect medium at the time to present the game the way the fans wanted to see it.”

Perhaps the most underrated of Sabol’s ideas was the music he had going with his films. Sabol hired Sam Spence in 1966 to compose scores which would fit NFL action. Often the sounds of high-class symphonies, Spence put together indelible soundtracks which along with a few other composers, have been released in a box set entitled Autumn Thunder. Between the Sabol’s, Facenda and Spence, there has never been another comparable collection of talent attempting to showcase a sport.

It is impossible to imagine the NFL without Sabol. His vision of how the game could be conveyed on a television screen altered perceptions and captivated audiences, proving that football was every bit the beautiful spectacle as it is violent chaos.

Rest in peace, Ed. You deserve it.