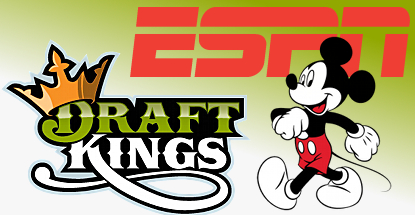 One of the stories we’ve been following closely the last several months is the boom of daily fantasy, especially when it comes to mainstream media involvement.  That explosion of daily fantasy has led to an advertising blitzkrieg that is inescapable when you’re watching a major sporting event (even on the jerseys of at least one professional sports team).  It’s also drawn partnerships with several major sports leagues and sports media companies.

Perhaps the most significant of those deals is ESPN’s new stake in DraftKings.  It’s probably no coincidence that directly afterward SportsCenter brought on a brand new daily fantasy expert.

Lest you think daily fantasy is some flash in the pan, the valuation of DraftKings will prove otherwise.  The Boston Globe has a profile on the startup that has taken the sports world by storm that includes this jaw-dropping paragraph:

It worked. A $250 million investment by Walt Disney Co., first reported by the Wall Street Journal in April, is expected to be announced within days, valuing DraftKings at nearly $1 billion. DraftKings wouldn’t comment on the investment.

One billion dollars.  That’s billion with a “b.”  Billllllion.  I guess a cool $250 million coming from ESPN doesn’t hurt in that department.

The money flowing in and out of daily fantasy is insane.  How has it escaped scrutiny from the federal government?  Ironically enough, it all goes back to the poker boom of the mid-2000s.

An upcoming DraftKings game linked to golf’s US Open this month costs $20 to enter, and will pay out $1 million as its top prize.

How is that legal? When Congress passed the Unlawful Internet Gambling Enforcement Act in 2006, it outlawed games of chance like poker and blackjack, but exempted fantasy sports, which were seen as requiring knowledge and skill to win. Regulations differ by state, but none of the daily fantasy startups has run into legal challenges.

Sports commissioners like Adam Silver have spoken out in favor of legalizing and regulating general sports betting, but quite honestly, they might not need to become involved with old-fashioned gambling with the money in daily fantasy.  Daily fantasy is the hot new trend that combines two of society’s favorite things: sports and money.  Barring some unforeseen circumstances or legal challenges, it doesn’t look like it’s going anywhere anytime soon.  And with the official partnerships of the leagues and the networks, they may be able to have more ownership and make more money than they ever dreamed of doing before.