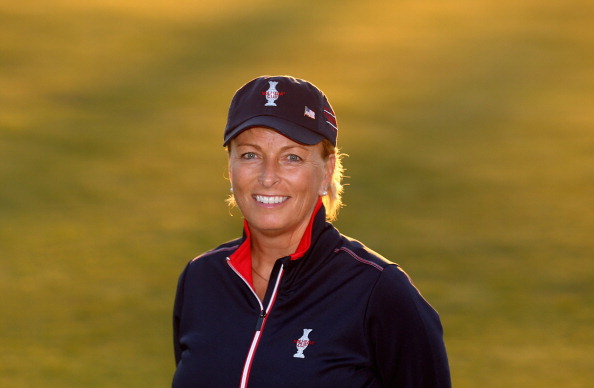 Just over a month after losing David Feherty to NBC/Golf Channel, CBS Sports has named his replacement, veteran golf analyst and on-course reporter Dottie Pepper. Since retiring from the LPGA Tour, Pepper has been an analyst/reporter on Golf Channel, NBC and ESPN. And she’ll continue to work for ESPN at The Masters and on SportsCenter through 2017 while she being part of CBS’ team starting next year.

On NBC, Pepper covered the PGA Tour as well as the USGA events from 2004 through 2012. Then she joined ESPN as well as becoming a member of the PGA of America Board of Directors for a three-year term. And with ESPN cutting back on its golf coverage, selling the rights of the Open Championship to NBC a year early plus her time at the PGA of America coming to end, CBS saw an opening to bring Pepper into its fold.

She’ll work all of CBS’ PGA Tour events as well as The Masters and the PGA Championship. It’s a return to being on TV full-time. In 2012, Pepper cut back on her television work due to her PGA term.

Pepper explained to Awful Announcing that she decided to return to television full-time due to a melding of a few things, “Starting with the landscape of golf changing at ESPN, CBS having an opening and also my term as a PGA of America Independent Director coming to an end in about a month created the scheduling space to be able to do it.” Pepper said thanks to cooperation among all of the parties, “it came together in the happiest way.”

CBS Sports Chairman Sean McManus told Awful Announcing, “When it became evident that we weren’t going to get our deal done with David Feherty, Dottie was the first and only person we considered. I had admired her work on other outlets.” McManus added, “It was an obvious choice. She’s the only person we pursued.”

When informed about what McManus said, Pepper was surprised, “That’s incredibly flattering. And I love covering live golf and that’s what this opportunity gives me.”

McManus said, “I think the chemistry (with our golf team) will be good. She’s got a great sense of humor, she doesn’t take herself too seriously, but she’s got all of the knowledge and credibility that we were looking for.”

Pepper said that she will begin acclimating herself with the CBS golf crew right from the beginning going to their first tournament of the year and learning how the producers and announcers work as a team. “I’m going out to San Diego (for the Farmers Insurance Open) early and even though I’m working Saturday and Sunday, I’m going to be in that (production) truck on Thursday and Friday understanding their communication way,” Pepper said. “It was different at ESPN and it was certainly different when I came into the business at NBC and in both situations, I was helped a lot by spending extra time in the truck and understand how they process the information that the on-course reporters and tower reporters are able to get them, so I think it really helps you when you actually go out and do your job live.”

McManus said bringing Pepper to CBS was an ideal situation for both parties, “She’s going to do the full slate of events and she was very enthusiastic to do that from the very beginning.”

One side project that is important to Pepper and one that she’ll maintain when she’s at CBS is her series of children books with lead character Bogey Ballton, a golf ball that overcomes bullying. “Four years into the project and we’re still alive in a tough industry, that’s saying something,” Pepper said. “It’s a fun way to get life lessons in a positive way through a cool character and yeah, we’re still alive.”

Pepper becomes the second woman to call and analyze the PGA Tour on CBS. Mary Bryan worked selected events including the 1995 PGA Championship into the early 2000’s.