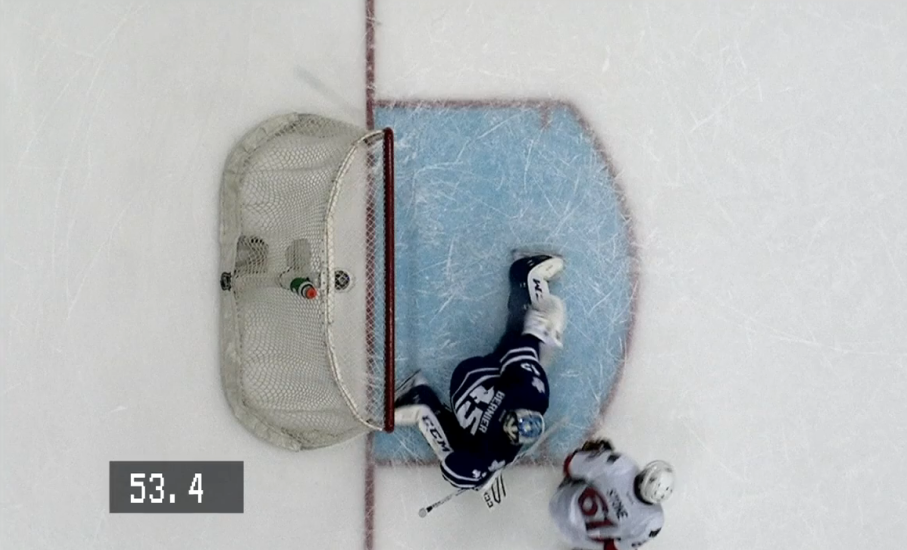 Canada’s national NHL rightsholder is doing damage control after releasing the definitive angle of a controversial play two days after it took place.

With the Ottawa Senators’ playoff hopes hanging in the balance, defenseman Marc Methot came within inches of winning Sunday’s game against the Toronto Maple Leafs, firing a shot through the crease but inches wide of the net in overtime of Toronto’s 3-2 shootout victory.

On Rogers-owned regional station CityTV, Sportsnet aired a single replay from an inconclusive angle. Broadcasters Dave Randorf and Greg Millen discussed it briefly during the next stoppage, but the game carried on.

It was analyzed Zapruder-style by Senators bloggers on Sunday night and despite the lack of a clear angle, it became pretty evident that no goal was scored. Even if it had gone in, there was nothing the league could have done under the rules.

Despite this apparent finality, Sportsnet proceeded to post a handful of stories about it on its website over the next 48 hours.

Meanwhile, the shot was not uploaded to GamePlus, a bonus feature on GameCentre Live for Rogers cable subscribers that gives them additional angles like the ref and goalie cams for select plays.

The NHL confirmed it was no goal on Monday, and Sportsnet published the conclusive goalie cam angle on the website Tuesday, calling it “the latest camera angle to emerge”.

So why the wait?

Jennifer Neziol, the director of communications for Sportsnet and its NHL properties, told Awful Announcing the following when reached for comment Tuesday:

During the game when this happened, it was not a reviewable play. We did run a slow-mo replay, but at the time, there was no reason for us to present anything further.

Once this gathered steam on social media, we were already signed off air for the night, and the truck was packed up and leaving the facility. As is normal course of action, it took us a few days to locate the mobile and gain access. Once we did, we were able to access the footage, which we released today.

If it was “not a reviewable play”, why did the website publish so many posts about it and ask its readers if a “phantom OT winner” was scored before releasing the definitive look confirming no goal two days later?

How did it take Sportsnet “a few days” to locate the goalie cam view of this play when they posted other plays in the game using the very same angle?

How did the NHL confirm the no-goal ruling on Monday if that angle wasn’t available?

Sportsnet has since updated all of its Methot posts with the definitive video. After the defenseman downplayed the incident with reporters on Tuesday, the specialty channel uploaded the scrum to YouTube with the title, “Methot jokes about the whole goal conspiracy”. Tongue-in-cheek or not, there’s no “conspiracy” if the satisfactory angle is shown on TV or posted online within a reasonable amount of time.

The league’s national rightsholder didn’t create the controversy, but it perpetuated one by continuing to cover a unreviewable play without producing evidence that eventually rendered it even more of a moot point than it already was.