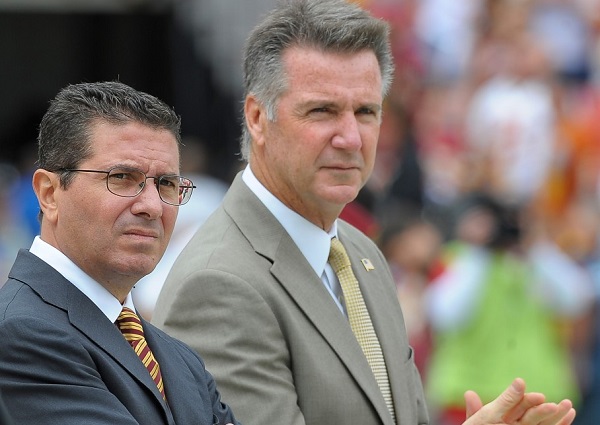 If you’re Dan Snyder, it’s good to be the boss. If you’re Jason Reid or Chuck Sapienza, maybe not so much. And if you’re Bruce Allen, it’s nice to have the boss on your side.

Reid, a former Washington Post sports columnist, was set to debut his new radio show on D.C.’s ESPN 980 Monday morning (March 16). Called “The Man Cave,” Reid and co-host Chris Paul were gearing up to take on the morning drive with “a blend of sports, comedy and entertainment,” according to station program director Chuck Sapienza.

ESPN issued a press release touting the show, also mentioning that Reid had been hired to write for ESPN.com. A Twitter account had also been set up, with a post promoting the program’s debut in four days. From all appearances, everything was ready to go.

But on Monday morning, “The Man Cave” was nowhere to be heard on ESPN 980. The show isn’t listed on the station’s website. And by the end of the day, Sapienza had resigned from his position. What happened?

In addition to being the owner of the Washington Redskins, Snyder also owns ESPN 980 as part of his Red Zebra Broadcasting conglomerate. Reid, formerly a Redskins beat writer, has frequently condemned team management in the Post sports pages. The columnist was particularly critical of Allen, the organization’s president and general manager. At the end of the 2014 season, he wrote that the Redskins “will remain on the wrong path as long as Allen is in charge.”

According to reports, Redskins management wasn’t thrilled about an outspoken critic of the team having a featured morning drive-time show on its station. The Post‘s Paul Farhi cited sources “close to the Redskins and the radio station” that said Allen played a major role in making sure that “The Man Cave” didn’t make it on the air. But did that result in the show just being delayed or was it outright canceled?

On Sunday, one day before “The Man Cave” was set to debut, D.C. media blogger Dave Hughes reported that the show wouldn’t air on Monday and sources told him it “will never air on the station.” Furthermore, Sapienza was fired when he stood up for the program and its cancellation. (Farhi later reported that Sapienza had resigned.)

Ultimately, this entire episode seems to confirm the worst fears about Snyder owning a sports talk radio station. Could the hosts truly say or report anything critical of the Redskins considering who was in charge? Until this point, the answer appeared to have been yes. For example, Tony Kornheiser and his guest co-hosts often question the performance of the team. He regularly acknowledges that Snyder owns the station that broadcasts his show. Yet all involved probably draw the line at ripping upper management.

That’s a boundary Reid had no problem regularly stepping over as a columnist for the Post. He wouldn’t have been doing his job otherwise. Did Redskins management want to prevent Reid from taking those barbs to the airwaves? Did Allen hold a grudge for being the target of those attacks and decide to take some punitive retaliation? It’s not a terribly difficult conclusion to reach, given the circumstances.