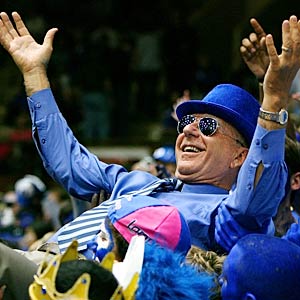 Whether you love or hate Dick Vitale, the man is kind of a legend. And pulling him from calling Duke/UNC is the sports equivalent of putting Baby in the corner (I have a quota of bad 80s metaphors to fill, okay??). Despite this shun, if you will, Vitale is firm in his loyalty to ESPN and recently said so in an interview with FTW:

ESPN has never, ever, ever, ever, said anything to me about age. ESPN has treated me like royalty. There’d be no Dickie V, there’d be no commercials, there’d be none of this without any ESPN giving me visibility and exposure. ESPN’s been great to me. They’ve been my family. And I’m going to celebrate. I’ve been a blessed guy. I’ve exceeded any dream I’ve ever heard. And I want to point that out. I’m not a bitter guy. I love people. You come to the arena you see me hugging with fans, dancing with fans, being with fans. I love people. I was hurt when it initially happened, obviously, they know that, I told them initially. I can’t lie to the media and tell them “it’s ok, it’s ok,” I’m not going to do that. But I do understand. We have other very good announcers — Jay does a great job at what he does, Dan Shulman, all our people. I feel in my heart I still have the passion as much as I ever have.

Vitale is 75 and still going strong. He’s been with ESPN since 1979. He could be angry and bitter, but what’s the point? Just to play Devil’s Advocate, taking him out of the Duke/UNC equation levels the playing field of announcing bias just a LITTLE BIT because even though Bilas went to Duke himself, no one loves Duke or Coach K more than Vitale. His Dukie-V nickname is there for a reason.

While we appreciate Vitale’s honesty about the situation, it’s also nice that he’s placing a positive spin on this whole thing. In a world of Twitter meltdowns and subsequent suspensions coming out of ESPN and other media outlets, Vitale taking the high road is the smartest thing he can do. We’ll just continue to look forward to him live tweeting Barry Manilow concerts.