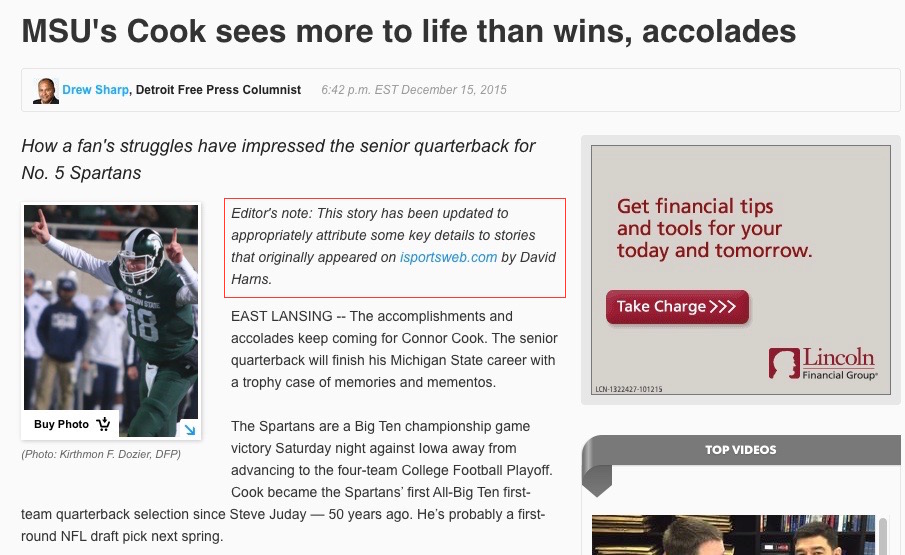 Back on November 20, iSportsWeb’s David Harns chronicled the story of quadriplegic Miranda McCoy who became a big fan of Michigan State quarterback Connor Cook. It was a very emotional story. Three weeks later, the Detroit Free Press picked up the story through a column by Drew Sharp. The only problem is that it wasn’t a different story, it was practically the same story.

The Detroit Sports Rag’s Justin Spiro pieced together what was an extensive piece and he discovered that not only did Sharp not talk to McCoy, the details of the story were lifted directly from Harns and iSportsWeb without any direct attribution. Spiro writes that Sharp did speak with Cook to get some background, but McCoy noted to the Detroit Sports Rag that she was never interviewed by the Free Press writer and there were errors in Sharp’s story:

“I have not talked to Drew Sharp or anyone else with the Free Press before or after their story was published. I was browsing Twitter and noticed Joe Rexrode praising Drew Sharp for his article about me. At first I thought it was cool that someone had picked up on Dave’s story, then I read it. I paused and was like ‘wait, what?’ I didn’t tell any of this stuff to him, and there were some details about me that were wrong.”

According to Spiro, the Free Press was made aware of the plagiarism and edited the article to note that it was details of the story was taken from iSportsWeb and include links to the site. The Free Press offered Harns compensation in the form of a free-lance rate as he had written for the publication in the past. It appears he refused, but asked the Free Press to donate it to a charity close to McCoy and the paper did that doubling the rate originally offered. In addition, Spiro reports that Sharp apologized to Harns and tried to offer compensation as well.

According to the Spiro, the Free Press has not suspended Sharp and he has written columns for the paper since the plagiarism came to light and did not tell its readers that the actual article about McCoy and Cook was lifted.

This comes ten years after columnist Mitch Albom wrote a story about Michigan State alums Mateen Cleaves and Jason Richardson attending a Spartans game which they did not. At the time, Albom was forced to write an apology and a letter from the editor appeared on the front page of the paper.

So far, none of that has appeared in the Free Press. The Detroit Sports Rag asked for reaction from Harns and he issued this statement:

“Everybody makes mistakes, myself included. I’m satisfied with how the Free Press handled this situation and I consider the matter closed.”

The Detroit Sports Rag has screenshots comparing the two articles

Apparently Sharp has been found to have erred in the past including lifting a quote about Rush Limbaugh in Wikipedia which was found to be false and wrote about the Tigers’ Justin Verlander’s no-hitter which included several errors as Sharp did not attend the game and actually failed to watch much of it. In neither case was Sharp disciplined.

We have seen writers like Ron Borges and John Tomase in Boston be disciplined for plagiarizing, but for Sharp to be allowed to continue writing despite an obvious lifting of an article is not only strange, but extremely puzzling. Perhaps it feels by making a donation to charity, the Free Press has made the matter go away. Both McCoy and Harns feel the issue is closed, but with the Sports Rag bringing the story to light, it’s not going away and the scrutiny may just be starting.