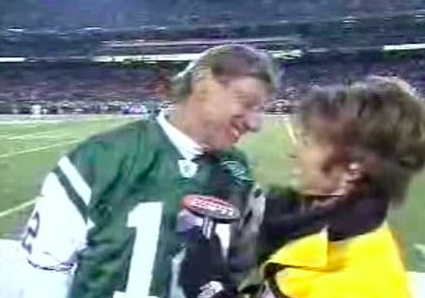 One of the landmark sports blogs on the interwebs has been blown to smithereens with several pieces of digital dynamite in the last week.

Kissing Suzy Kolber has been an internet and sports blog mainstay since its creation in 2006, producing some of the funniest and edgiest writing about the NFL around over the years.  For the last several years, KSK has been under the umbrella of growing digital media company Uproxx.  But it’s that relationship between KSK and Uproxx that is now the source of the site’s gutting.

On July 31st, editor Mike Tunison (a.k.a. Christmas Ape) wrote a lengthy post announcing his resignation.  At the core of Tunison’s resignation was a series of conflicts with Uproxx upper management including a lack of social media promotion and editorial vetoes.  However, the breaking point seems to be a KSK post mocking Bud Light’s “Up for Whatever” campaign that was removed by Uproxx.

Why did Uproxx take down the post?  Because Bud Light was an Uproxx sponsor…

Back in May, I was ordered by several top Uproxx editors to remove a KSK post that gently made fun of Bud Light’s #UpForWhatever ad campaign. You can read it here, where it was reprinted by one of our readers after many were confused when the post disappeared from the site. It’s the most innocent goddamn thing ever. Uproxx’s reason for removing the post was that Bud Light had just made a significant ad buy on the network. KSK isn’t journalism, of course, though it’s still always operated with a separation between advertising and editorial. It’s also worth noting that no Bud Light reps actually complained about our piece. Instead, I was told by the editors that they might have been bothered by it and that was cause enough to get rid of the post. “You know how humorless those advertising people are.” What made this even more galling was this happened literally a day after Uproxx, in doing its weekly “JOHN OLIVER ENDS THE BLOODLINE OF [some topical societal ill]” post, praised the HBO host for his criticism of Bud Light’s advertising. How do you square those things?

A month later, two KSK writers put together a clever piece reacting to a new track by Uncle Ezra Ray, a ‘90s nostalgia-powered supergroup consisting of Mark McGrath, Uncle Kracker and Kevin Griffin, one of the members of Better Than Ezra. Just the kind of off-topic rant we do to pass the time every off-season. Even though the song was being roundly mocked on the Internet, not to mention by Uproxx as well, I was told not to publish the post by Uproxx editor-in-chief because he is a friend of Griffin. A second post mocking the song, he claimed, might jeopardize Uproxx’s expected access at a festival being organized by Griffin later this year.

One might say that these posts on their own are not germane to KSK’s stated purpose of football humor, though that argument ignores that KSK has always had a free-wheeling approach to making fun of culture. This site has a long history of riffing on news, culture, politics and just about any issue where satire works, which is basically most issues. Bowing to fears of offending advertisers or losing access felt like a betrayal to what KSK stood for. We’ve criticized other writers and sites for that very behavior. Condoning it would be incredible hypocrisy on my part. Make a gag about ethics in football humor if you want; KSK didn’t get this far by compromising that initial mission. Taken together with a lack of help promoting the site and being left out of the loop of Uproxx’s overall decision-making, the deletions served as a breaking point for me.

This story hasn’t gotten widespread attention like Tommy Craggs and Max Read leaving Gawker after the massive controversy earlier this summer after a controversial post outing a business executive was taken down, but it’s a big deal for sports blogs given the notoriety KSK had.  And while the two situations are wildly different, there’s a common undercurrent – the management side interfering with the editorial one.  Once Uproxx took down a KSK post that poked fun at an advertiser, Tunison’s position as editor had been compromised and Kissing Suzy Kolber was an independent, anti-establishment voice no more.

And it’s not just that KSK’s leader left his post.  Almost every other contributor on the site issued goodbye posts as well and followed Tunison out the door.  Even KSK commenters were involved, with this blog post relating how Uproxx deleted critical comments of KSKGate.

Since Black Friday however, Uproxx has shown just how deep their gutless turditude goes. It began by editing Ape’s goodbye post by removing the link to the copy of the deleted Bud Light #UpForWhatever post. Then, comments that were critical of Uproxx and the way they handled KSK began to disappear. Before long, myself and other kommenters were banned from posting comments on all of Uproxx’s network. All of my comments for the last three weeks, whether related to their cowardice or not, were deleted. No explanation was given.

In the end, KSK will still be around, although it will be pretty much in name only.  KSK will basically merge with Uproxx’s already-existing NFL coverage and lose whatever independent self-identity it had left beyond open threads.  David Rappoccio wrote this on Friday about KSK’s future status:

In case you missed the news, our long time editor, Christmas Ape, has left for a nice farm upstate. His years of service will be missed, and I recommend pouring one out for him if you haven’t already. Also, the contributors known as PFTCommenter, StuScottBooyahs, Old James, Trevor Risk, Spilly and RobotsFightingDinosaurs have moved on as well, and their service will also be missed. But, lastly, I’m not going anywhere; I will still be here at Uproxx. So, those of you who know me from my cartoon work on Fridays will still regularly be treated to my bad puns and NFL logo bastardizations.

From here on, Uproxx Sports and KSK will be very integrated. All NFL content will live on both KSK and Uproxx, and I hope to keep a few KSK traditions alive, as well. The NFL GameDay Open Threads will still exist and be a prime feature moving forward, only now I’ll be the megalomaniac overlord operating them. So, don’t worry, folks. You can still drop by every Sunday/Monday/Thursday to laugh at opposing teams and cry when your own team fumbles and misses field goals.

Kissing Suzy Kolber has been a sports blog staple for nearly the last decade.  Alums like Drew Magary and Matt Ufford have gone on to further national prominence.  PFT Commenter is maybe the best parody account this side of Faux Pelini and is now crashing political debates.  With its brash humor, carefree attitude, and brutal takedowns (that yes, crossed the line on occasion), Kissing Suzy Kolber was the epitome of a what you think of when you think about a sports blog.

The battle between the mainstream sports media and sports blogs is over.  And yes, the blogs have won.  Everywhere you look, blogs and bloggers are the mainstream.  Look at Puck Daddy and the Yahoo Sports blogs.  Look at Deadspin.  Look at ESPN and every other major media company incorporating blogs into their daily sports coverage.  Look at all the bloggers and commenters that have risen up over the past decade to earn full-time jobs through doing what they love to do, and used to for free.

In 2015, there’s no real distinction anymore between blogs and mainstream.  It’s all part of the same mass media melting pot.  And that’s provided scores of opportunities for people to live out their dreams at a time when getting a good, stable job in traditional journalism is more difficult than trying to guard LeBron James one-on-one.  More platforms, more opportunities, more great writing, more diverse voices – these are all great things.

But along with that, many blogs and bloggers have to make a sacrifice and lose the editorial independence that made them what they were.  As seen in the demise of Kissing Suzy Kolber, many blogs are now under the umbrella of much larger corporations and yes, more mainstream companies.  These mainstream companies have executives.  They have advertisers.  They have standards and practices.  They have legal obligations.  They have a number of masters that need to be pleased beyond the blogger typing at his or her laptop.  Many blogs simply can’t be what they once were because they operate in a different universe.  (That’s not to mention the cultural changes that would see an untold number of questionable blog posts from ten years ago face increased scrutiny today.)

This is the inner struggle that many prominent blogs and bloggers now face.  The ones that make it big are part of the world that they had been the antithesis of for so long.  And it’s a high-wire act to stay true to yourself while answering to a higher power.  When the scales tip too far in one direction, difficult decisions have to be made like we saw this week with the KSK exodus.

The journey of Kissing Suzy Kolber is a sign of the times, for better and for worse.