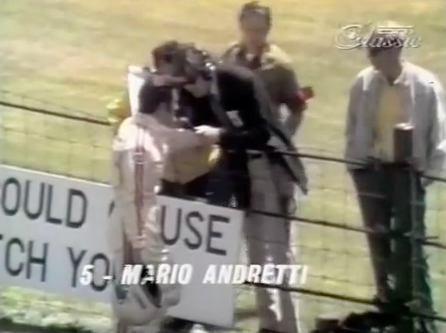 David Letterman brings the curtain down on his late night career tonight. His ties to the sports world are fairly pronounced, especially when it comes to open wheel racing.  Not only is he a part-owner for the Rahal Letterman Lanigan team, once upon a time he actually worked the race as a trackside reporter for ABC.

In the below clip, he’s stationed in one of the turns to interview Mario Andretti after an accident in the 1971 race.  Jim McKay actually thinks he’s pitching to legendary reporter Chris Economacki before correcting himself and acknowledging “Dave Letterman.”

At the time he was working in local television in his hometown of Indianapolis.  He recounted the experience to Fox Sports:

“Prior to that there was no same-day coverage of the Indianapolis 500 on television,” said Letterman, whose final show airs Wednesday May 20. “ABC got the contract but it was delayed coverage. I was working at the ABC affiliate in Indianapolis and Chuck Howard and the crew came in with the Wide World of Sports team with Jim McKay and Jackie Stewart. I’m just 22 or 23. They hired me and I got the fourth turn. The day of the race I had to walk all the way down the backstretch and short chute. I had a little microphone and headset and couldn’t hear anything so I just stood there and stood there.

“All of sudden, I see Mario Andretti walking toward the pits and I knew there was a yellow. You couldn’t see anything from there. So I called Mario over and he comes by only because there is the ABC thing on the microphone. I said, ‘I’ve got Mario Andretti here.’ I said it three of four times. Mario had just gotten out of a smoldering, hulk of a race car. He is nice enough to stand there. People are screaming at him and throwing beer on him. They said, go ahead.

“I asked, ‘Mario, what was it like out there?’ And he gave a very polite, gracious answer. Then I remember in a production meeting, will the condition of the track be a problem early on? So I asked him that and he said whatever he said. I said, ‘Thanks Mario, better luck next time.’

“So I just stood there late in the race and never heard anything from anybody.”

That’s one of the great pieces of random trivia of all-time.  The fact that an anonymous local media personality moonlighting as an Indy 500 reporter went on to be one of towering comedic figures and late night television stars who defined an era.  When Jamie Little is hosting The Late Show in 2035, we’ll say we knew her when…