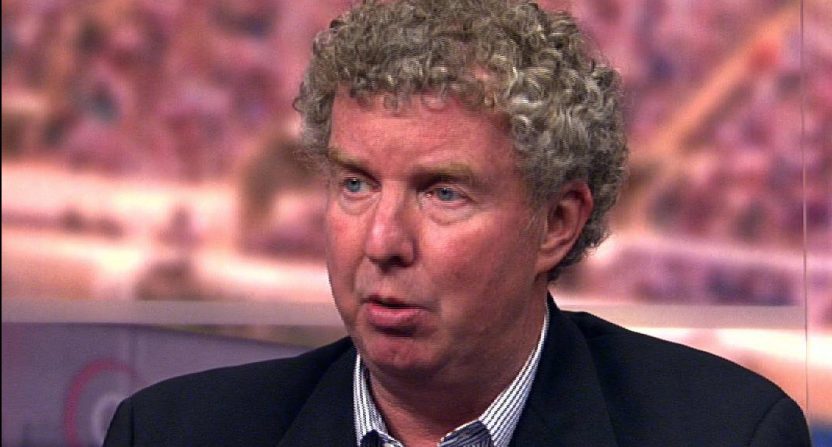 The Boston Globe’s Dan Shaughnessy has won the prestigious J.G. Taylor Spink Award from the Baseball Writers Association of America for “meritorious contributions to baseball writing.” It means he will be honored next year at the Baseball Hall of Fame in Cooperstown, New York. For Red Sox fans who have read Shaughnessy over the years, it’s as if one of the most polarizing, acrimonious and condescending writers has been rewarded for his work.

Since 1981, Shaughnessy has worked for the Globe covering the Celtics and the Red Sox as a beat writer, then becoming a columnist. He has feuded with players including Carl Everett (who coined the nickname detractors love to use, “Curly-haired Boyfriend” or CHB for short) and most recently David Ortiz.

He made a cottage industry out of a non-existent curse that supposedly haunted the Red Sox until 2004, “The Curse of the Bambino,” which he made into a book and was a consultant to the HBO Sports documentary of the same name. After the Red Sox beat the New York Yankees in the 2004 American League Championship Series, Shaughnessy was asked if the curse was broken and his reply was that it wasn’t over until he decided it was, which showed he didn’t want to let it go.

Over the years, Shaughnessy has gone after Twitter, soccer, the Houston Texans and other subjects all the while alienating New England fanbases to the point where he’s seen as a demagogue.

The reaction to Shaughnessy winning the Spink Award was as expected:

Dan Shaughnessy was inducted into the Baseball Hall of Fame? I wasn't aware they had a Fiction section.

@BostonGlobe @Dan_Shaughnessy ….. Ordinarily, writing about sports requires an ability to watch, understand, and describe the event. …

Is Shank really getting another award? Honest question, does anyone under that age of 50 actually read his stuff? https://t.co/3zo40UWtx0

@Dan_Shaughnessy gets the Spink Award for ripping the @RedSox on a regular basis.

@BaseballHall @Dan_Shaughnessy is this award given to tabloid yellow journalists who try and make news rather than report it?

@tomecurran @McCourtyTwins @ProFootballTalk is Dan Shaughnessy going into a special troll wing of the baseball HOF?

Dan Shaughnessy is in the Baseball Hall of Fame. This is not a world I’m comfortable living in anymore.

As you can see, Boston fans are just thrilled to see Shaughnessy honored by the BBWAA. And while columnists are certainly not paid to root for the local team, Shaughnessy seemed to go the extra mile to tweak readers pre-2004 after any particular heartbreaking loss constantly bringing up 1918 (the last Red Sox World Championship in the 20th Century), his beloved Curse and even making references to them in stories that didn’t involve the Red Sox. The sum of his columns and sometimes regurgitating of past work led to the formation of “Dan Shaughnessy Watch” which has been going strong for a decade.

Probably the peak of fan anger at Shaughnessy came in 2005 when he wrote a column about the relationship between then-General Manager Theo Epstein and then-team President Larry Lucchino, which led to a short resignation by Epstein (who left Fenway Park in an infamous gorilla suit). It was felt by Epstein and media observers that Red Sox management (namely Lucchino) leaked information to Shaughnessy.

And while Shaughnessy’s peers in journalism feel the honor is deserved, fans will continue to scratch their heads as to why he’s receiving the Spink Award. No matter, he’ll be honored at the Baseball Hall of Fame next July. Shaughnessy’s former Globe colleague Peter Gammons hopes to introduce him during the ceremonies.

Red Sox fans may ask Mystery Science Theater 3000 to riff on his speech or do it on their own come July.