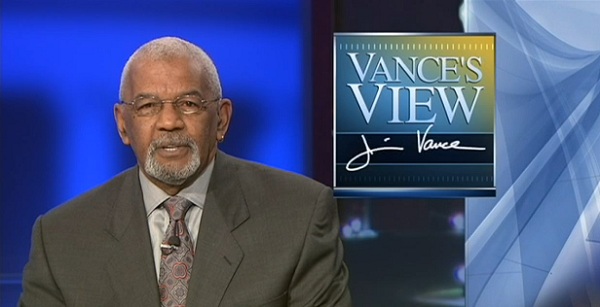 One of the most ridiculous sports debates of this year sprung up after Steelers’ linebacker James Harrison’s comments about taking away his kids’ participation trophies,  with all sorts of hot sports takes on both sides of the issue sprouting up, but long-time Washington, D.C. news anchor Jim Vance of NBC affiliate WRC-TV has cranked up the heat to a whole new level. In a discussion about Harrison’s stance with sports anchor Jason Pugh and news anchor Wendy Reiger on Monday, Vance said giving kids participation trophies was “child abuse.” Here’s video of the exchange:

Via Des Bieler of DC Sports Bog, here’s the transcription:

Pugh noted, pointedly, that Harrison’s children are “six and eight years old,” and the anchor made it clear that he disagreed with Harrison’s decision. That sparked this exchange:

Pugh: “Six and eight, and you take away participation …”

Vance: “You begin teaching your children from the moment they come into this Earth …”

Vance: “It’s child abuse to give a kid a trophy that he has not earned. If a parent’s responsibility is to teach a kid how to deal with the real world, then that is child abuse. Because that’s not the real world.”

Pugh tried saying that he got a participation trophy and “turned out fine,” but his points were crushed beneath the hammer Vance was swinging. Rieger was on Vance’s side, saying, “He doesn’t want them to feel entitled, like everyone owes them something.”

Not liking participation trophies is one thing, arguing for their universal abolishment is something else, and calling them “child abuse” is even further still. This isn’t an unknown commentator, either; the 73-year-old Vance has been with WRC-TV since 1969, and has won 19 Emmys. From this corner, this is an unfortunate choice of words by Vance regardless of what you think of his opinion; offering participation trophies or not is awfully trivial next to actual child abuse. But it’s a choice of words that will certainly get him a lot of attention…