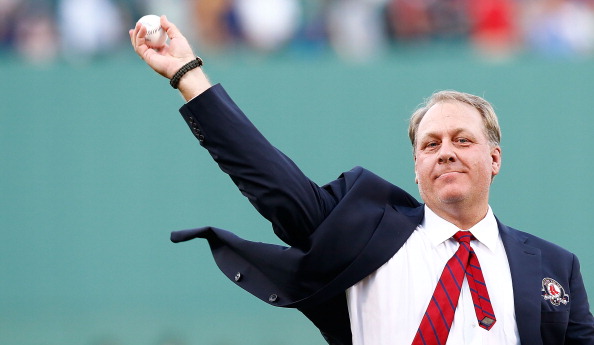 ESPN baseball analyst Curt Schilling is not happy with us. Overnight, Schilling sent an e-mail explaining in great detail why he is not happy. There was no subject line, but the correspondence was in reference to several articles we have published about his since-deleted tweet regarding Muslims and Nazis and subsequent suspension. Accusations were sent. Integrity was questioned.

Schilling states he “did not write this letter for public consumption” but given what he says in the letter about writers of this site — the email was sent to Dan Levy, but Schilling links and references articles also written by other AA contributors — and the polarizing nature of the entire situation, we take his email as an attempt to try to shut us up. Journalistically, we never explicitly agreed to an off-the-record conversation, and thus, decided to deny his request.

Here is his email:

I am a Republican, next to California I live in the bluest area on the planet. I am a former Red Sox player, I am a Steeler fan, a Bruins fan and I raise chickens and next to my Rottie I have a 3 pd Maltese named Ellie I take everywhere. I’m 6’5″ 245 for crying out loud. My body is a cruel family joke (thanks to my Dad) and I am losing my hair.

All that to say ya, I’ve been on the receiving end of crap for a good long while.

I have zero issues, ever, with anyone that wants to disagree, call me on something, yell at me for something else or just MF me because I am a Conservative American who loves the soldiers and the flag and everything they stand for and am incapable of answering any question yes/no. I made mistakes, and given what the Bible has told me I’ll do so every day for the rest of my life. Certainly not intentional, never racial and I have tried to never be malicious. I hate bullies.

All I ever ask is honesty and an attempt at integrity.

But if you want to rip me, or talk shit about me, please do it with more than an ounce of pride in your job. Nowhere, ever, before during or after, have I ever compared “Muslims” to “Nazis”, ever. Normal every day peace loving Muslims have as much to do with “radical” as I do with “fleet afoot”.

However it appears, like many, you ‘made me say it’ anyway.

Here’s a cut and paste of what you wrote

And here’s what was actually tweeted

Why would you omit the one word in that entire tweet that provides the only important piece of context other than WWII era Nazism?

I bet I know. Because without rigging your comment to be something it wasn’t, you would have had to search for an article and work to create content. You chose to make it up, ‘misremember’ as best you can, and create something that didn’t exist because it was the ‘flavor of the day”. Even if it wasn’t true> Very Chris Mortensen of you.

I don’t have a racist bone in my body, never have. Anyone that knows me even a little knows that.

Yet you, like so many others, continue to destroy what’s left of the publics trust and confidence in media by creating a story of your own design and liking when you didn’t need to, and smearing someone’s reputation ato do it. Any thought at all as to my children and their thoughts if they read the lie you created? That’s an honest question. I dealt with it in my home, but I always wonder when people of your ilk give ruining someone a shot, if you ever do think about the family you impact. Especially when you are creating a story that never happened to do it.

And for what it is worth I apologized for tweeting. The forum was about as poor a choice as I could have made in trying to elicit a potential discussion on that topic. I did not, and will not apologize for the content of the tweet. If you, or anyone else, can’t wrap your head around your native language enough to understand that omitting words, or adding them, is plain and simple lying when it comes to journalism. Oh and it changes the content of a quote when you do that too. But you already knew that. But to paraphrase, when a radical minority is opposed by a silent and weak majority, really really bad stuff can, and has, and likely will again, happen.

Jessica Mendoza is a pro, I don’t care that she got to hit a ball twice the size of ours. She is likely the greatest hitter in the history of Womens Fastpitch.

All that and she’s a better person than she was a player.

She earned, deserves and worked her ass off to get into the booth for ESPN and MLB and she did herself, and true professionals in the sport everywhere a great service with her performance.

My suspension or not she deserves to be in a booth calling MLB games. Not to break a barrier, not to enter a new frontier, but because she earned it.

She’s one of the few still understanding if you work your ass off you can do what you dream.

Just wanted to let you know I thought the article was bullshit and a cheap shot.

If you don’t like me have the guts to put that out right up front.

I think you lack integrity, I think you lack an ounce of pride in your work and I think you’re a weakling to submit to personal bullshit attacks and lies in a public facing forum of a person you’ve never met, and don’t have the first idea about off the field. But I wil admit I could be wrong, as I have absolutely no idea who and what kind of person you are.

See, speaking your mind is that easy, even if it’s not kind. At least it’s honest and there’s zero ambiguity right? Didn’t need to omit anything, just took what you wrote about me and dissected it. Didn’t make anything up either.

I did not write this letter for public consumption, I wanted to do this direct, to you, and have this remain between us.

God Bless and hopefully He will forgive me for this rant

After receiving Schilling’s e-mail we asked ESPN for a statement on the matter.  ESPN responded by saying, “We weren’t aware of Curt’s plan to craft or send this email. We are looking into it.”

Here is our response to Curt Schilling’s e-mail.