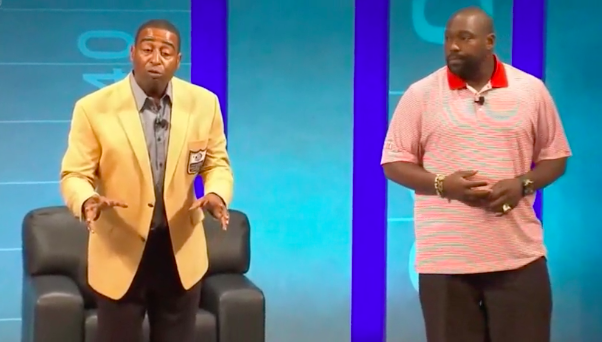 Recently, comments made by Cris Carter at the 2014 NFL Rookie Symposium came to light.  In the comments, Carter told rookies they should find a “fall guy” who could help players avoid jail time and criminal charges.  The reaction to the comments gaining attention after a year going unnoticed on the NFL website was swift.  ESPN and the NFL both condemned Carter’s remarks the same day the story broke.  But all of the well-crafted PR statements and forced Twitter apologies in the world can’t erase the fact that this is one of the more appalling cases of bad judgment you will ever see.  Let’s go over all the places where people’s better judgment failed them…

1) Cris Carter himself – Cris Carter encouraging NFL players to find someone to take the blame for their crimes and find a “fall guy” willing to go to jail for them is almost so jaw-dropping it defies belief.  Forget who Carter is and the millionaire athletes he’s speaking to for a moment.  Remove all that and at the bare bones you have a citizen championing causes like obstruction of justice and fraud and false imprisonment.  It’s unconscionable.  How Carter could think that is in any way ok is unbelievable and maybe a signal of much larger issues in the NFL culture.  (For what it’s worth, Ray Lewis once went on ESPN and said “There’s some things you can cover up.”)  To compound that, how Carter could think this is a good piece of advice to dish out to young men like it’s something out of “The Power of Positive Thinking” is just ghastly.

And this wasn’t just an off-the-cuff remark, this was a full two minutes on Cris Carter instructing NFL rookies that they needed to have a friend who would go to jail on their behalf and keep their name out of the papers.

Now to Carter’s Twitter apology.  Can we believe this for one second?  Honestly?  This is the ultimate hand-in-the-cookie-jar apology if there ever was one.  The only reason Carter apologized was because someone actually cared to notice what he said.  THANK YOU THOUSANDS OF ANGRY PEOPLE IN MY MENTIONS FOR HELPING ME FINALLY SEE THE LIGHT.

Seeing that video has made me realize how wrong I was. I was brought there to educate young people and instead I gave them very…

bad advice. Every person should take responsibility for his own actions. I’m sorry and I truly regret what I said that day.”

Here’s the most troubling aspect of Carter’s remarks – he said them in the middle of the Ray Rice and Greg Hardy cases.  He said it almost exactly a year after Aaron Hernandez was charged with first-degree murder!  How many players listened to what Carter said and thought to themselves, “I can go ahead and beat up whoever I want or commit whatever crime I want and IT WILL BE OK AS LONG AS I HAVE SOMEONE ELSE TAKE THE BLAME FOR IT.”

Compare this Cris Carter to the Cris Carter that was lauded for speaking so openly against domestic violence and child abuse and it’s impossible to reconcile the two.

Carter to NFL rookies: “I need to know who’s gonna be the fall guy, who’s gonna be driving.  Because you all not gonna all do the right stuff now so I gotta teach you how to get around all this stuff too.  If you’re gonna have a crew, one of them fools got to know he’s goin to jail.  We’ll get him out.”

Carter on child abuse just a couple months later: “This is the 21st century! My mom was wrong. She did the best she could, but she was wrong about some of that stuff she taught me. And I promise my kids, I won’t teach that mess to them.”

Moving forward, I don’t think this is something that ESPN can necessarily fire or reprimand Carter for… but it’s hard to imagine Carter’s television career surviving this.  This is bad.  How are we supposed to take Carter seriously on anything, especially involving personal conduct, moving forward?

2) Warren Sapp – Warren Sapp and bad judgment go together like peanut butter and jelly.  Watch the video again.  When Carter makes his fall guy comment, what does Sapp do?  He laughs!  Because getting away with criminal activity is so funny, hahahaha.

Update, July 2021: This video has been taken down.

3) The NFL – The fact that the NFL thought Warren Sapp was a good candidate to teach NFL rookies important life lessons is pretty remarkable.  Even before this took place in 2014, Sapp had a checkered past not counting the solicitation charges that led to his firing at NFL Network.  In 2010 alone, Sapp was charged with domestic battery (later dropped) and filed for bankruptcy.  You might as well ask Matt Millen to lead a summit on “How to be a successful NFL GM.”  One would think Carter would have been the sensible one out of the pair.

4) The NFL, again – This video (and Carter’s comments) lived on NFL.com for over a year without anybody ever noticing.  First of all, how does that happen in 2015?!?  Second, how did someone at the league office or someone working for their website not think to themselves that the guy representing the league with a Hall of Fame jacket encouraging the covering up of crimes was not the best way to protect the shield.  Did nobody actually watch the video?  Does NFL.com have no editors?  How many people were asleep at their respective switches to allow this to live on the web for over a year?

5) The media – For that matter, how did nobody else pick up on these comments in the first place?  Of all the players, agents, NFL officials, and media that live in the NFL universe… how did this go unnoticed?  At least one major outlet had the chance to do so and neglected to publish Carter’s remarks.  At The MMQB, Robert Klemko wrote a detailed first-person account of the 2014 NFL Rookie Symposium.  (H/T @bkell77 for the tip.)  He even extensively quoted Carter and Sapp’s lessons for the rookies.  And yet, Klemko did not report on Carter’s “fall guy” comments.  He did quote Carter saying, “There’s no hiding crimes anymore, everybody is TMZ,” which is a weird contradiction to his statement that has gone viral.  The MMQB called Sapp and Carter’s speeches “a message of practicality.”

This controversy is just another black eye for the NFL in a period of time when the league can seemingly do nothing but make money and make fools of themselves at the same time.  It doesn’t make any sense how the league can thrive in spite of its own incompetence and outlandishness at times.