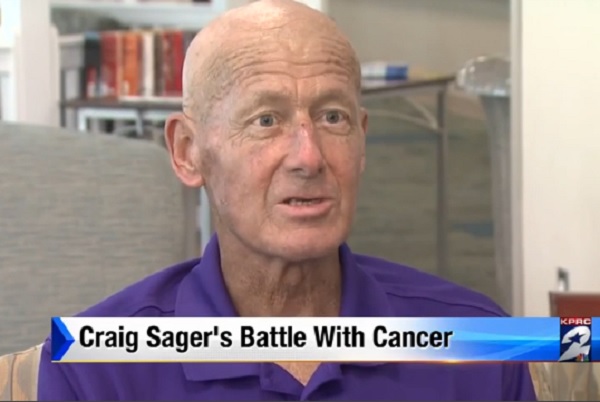 A few weeks after Craig Sager stopped by Minute Maid Park to say hello to his Turner Sports colleagues before TBS’ broadcast of an Astros-Dodgers game and provide an update on his treatment for leukemia, he decided to make a more public appearance, speaking with Houston’s KPRC and reporter Haley Hernandez.

As could be expected for someone undergoing chemotherapy, Sager has lost his hair and is noticeably thinner. Hernandez said during her report that he had lost 50 pounds, and you can see from the footage that he is now extremely thin, borderline frail. Sager’s voice is also weaker, lacking the authority and warmth we’re accustomed to hearing from him while covering NBA sidelines.

However, Sager is in extremely good spirits — as he should be, because his treatments are going well and all subsequent tests have been positive. He has to visit the clinic at Houston’s M.D. Anderson Cancer Center daily, as part of a hundred-day maintenance program following a bone marrow transplant he underwent on July 17, but as you can see in the report, Sager is definitely thinking about his eventual return to TV.

If you’re not able to watch the report, Sager has his eye on two particular dates during his recovery: A return to Turner Sports’ NBA coverage once the 2015-16 season begins and covering the 2016 Summer Olympics in Rio.

“I said, ‘The NBA season starts Oct. 27, what are my chances?’ He goes, ‘Oh they’re good!'” Sager recounts asking his doctor. “I said one more, ‘What about the Olympics next summer in Rio?’ He said, ‘No brainer! I said yes! Yes!'”

Sager told the Houston Chronicle‘s David Barron earlier this month that he’ll need to grow his hair back before hitting the NBA sidelines and standing in front of the cameras again. But should any of us dismiss the opportunity this would give Sager to sport some sweet hats to go with those signature flashy blazers. A fedora or newsboy cap would be a good look when talking to Spurs coach Gregg Popovich. Or what about a straw hat when covering a game in Miami?

Regardless of what Sager chooses to wear on his head — especially if his preference is to have a healthy head of hair again — the great news will be when he returns to Turner’s NBA broadcasts and our TV sets. Judging by Sager’s spirits and willingness to talk publicly about his recovery and the importance of his family in that process (and though he doesn’t say so, the inspiration he is surely providing to others going through similar circumstances), that day isn’t too far away. It may very well be exactly the days Sager is looking toward with hope and optimism.