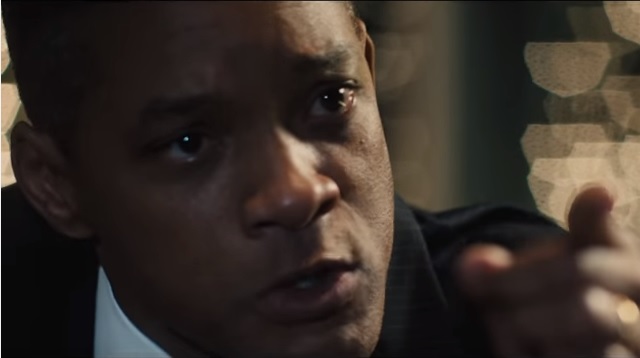 Awful Announcing had a chance to get an early look at the much-hyped and inevitably controversial Concussion, a so-called biographical sports thriller starring Will Smith which will be released by Columbia Pictures on Christmas Day.

1. The film doesn’t bash football as much as some might be expecting

This type of film — a buzz-worthy Hollywood blockbuster with a batch of A-list actors — possesses the ability to severely damage, even cripple an institution. And while Roger Goodell and his cronies are clearly cast as the villains, I found it interesting that several characters — including Will Smith’s protagonist, Nigerian-born pathologist Dr. Bennet Omalu — seem to go out of their way to note the game’s beauty and grace.

Dr. Julian Bailes (played by Alec Baldwin) acts as somewhat of a buffer between the world of science and the realm of football, noting how much it hurts him to be teaming up with Amalu in what becomes a battle with his former employer. In a thought-provoking scene, Bailes finds himself defending his actions as a former team physician by noting how hard it is for outsiders like Omalu and Dr. Cyril Wecht (Albert Brooks) to relate.

He describes himself and his peers as “mechanics trying to keep the cars on the racetrack.”

Later, in a heated discussion with Omalu, Dr. Joseph Maroon from the NFL goes out of his way to list several of the ways in which the league has been a boon for society, noting the jobs it creates and the number of kids it sends to school.

All in all, it feels as though the film makes every effort to acknowledge the fact that football has grounds to be loved and admired, despite the fact multiple comparisons are made between the NFL and big tobacco. And when you consider that most Hollywood films seem to prefer to avoid gray area, it’s a bit odd.

This is, of course, a subjective point. Maybe I was expecting a cinematic hatchet job, despite the fact there was reported evidence that Sony deleted some moments that were “unflattering” for the NFL.

2. But there still are some very unflattering moments

Generally, league representatives are made to look like idiots throughout the 123-minute film. The battle between indisputable science and big business is reminiscent to the debate over climate change, with viewers fully aware — even if they went in blind — that those experts attempting to discredit Omalu on behalf of the league would eventually be shamed.

But viewers who aren’t football fans might actually be most disgusted by several consecutive scenes that actually required no embellishment. In a montage, while Smith portrays Omalu working from home on the analysis that would lead to his discovery of chronic traumatic encephalopathy (CTE), Omalu’s television airs multiple editions of ESPN’s infamous “Jacked Up” segment on Monday Night Countdown. Tom Jackson and the rest of the Countdown analysts laugh hysterically over top of clips of D.J Hackett, Jon Kitna et al getting smashed, glamorizing the violence that may be killing the game and its players.

3. It’s not just a football film

The film does a hell of a job advancing the story by essentially marking chapters with the deaths of former players. It starts with Mike Webster, whose character (played impeccably by David Morse) dies suddenly at 50 and becomes patient zero for CTE after an Omalu autopsy. Then the deaths of Justin Strzelczyk, Terry Long and Andre Waters give Omalu a chance to establish CTE as a scientifically significant disease. And finally, Dave Duerson’s suicide — and Duerson’s corresponding request to have his brain examined for CTE — solidify Omalu’s reputation and findings throughout the football world.

But the film doesn’t skimp on character development. We get to know the deeply damaged Webster before his death, and his pain is extremely unsettling. We also get to know Omalu, who it appears was fighting an internal battle: All he ever wanted was to be accepted as an American, and yet he was establishing himself as the chief threat to America’s favorite pastime. Viewers could have done without what felt like a forced romantic subplot between Smith and Mbatha-Raw, but writer and director Peter Landesman does a nice job establishing battles between Omalu and himself (he’s forced to foot the bill for much of his research), Omalu and co-workers (a fellow pathologist and Steelers fanatic protests his decision to examine Webster’s brain), and of course Omalu and his critics (whether it be the league’s so-called concussion experts or those in his everyday life who call him a quack and refer to him only as Mr. Omalu, rather than Dr. Omalu).

4. We’re given most of the science in layman’s terms

Actually, most of it is covered in one very strong scene involving Omalu and Dr. Steven DeKosky (Eddie Marsan), in which Smith’s character explains that humans lack the shock absorbers that protect the brains of animals that naturally have to endure head trauma. Our brains don’t have safety belts, he says, and the shock absorbed as a result of a typical football blow is nearly twice as strong as humans are supposed to suffer.

His conclusion: “God did not intend for us to play football.”

5. Sensationalism comes with the territory

We didn’t need the love story, or the tragedy that occurred within it that was minimized as nothing more than a minor — and unnecessary — plot twist. It’s not clear whether Omalu really had to fight his co-workers that hard or whether he really spent upwards of $20,000 of his own money conducting CTE-related research. But this wasn’t a documentary, and it may have had to embellish some points in order to appeal to the masses.

That was to be expected, and it might also explain why the plot focused so squarely on Omalu while neglecting to mention other sports concussion pioneers like Dr. Ann McKee.