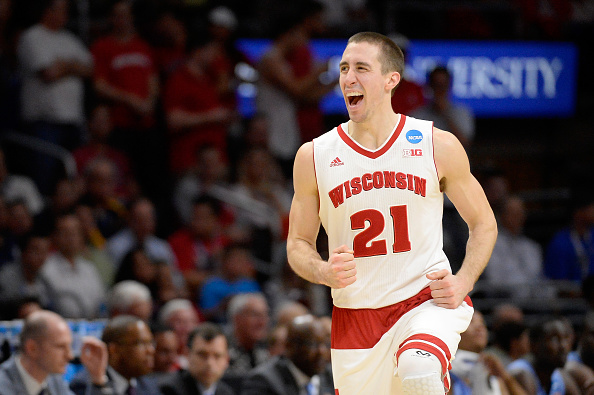 On Thursday, Richard Sandomir of the New York Times wrote an interesting article, comparing the viewership totals from this year’s bowl season to the viewership totals from the first two rounds of March Madness. Based on the data, he concluded that the “meaningless” bowl games were a bigger draw than the NCAA Tournament games. While that’s all well and good, he’s really comparing apples and oranges here.

You simply can’t compare Oregon’s loss to Wisconsin on Sunday to their victory over Florida State in the Rose Bowl and draw any substantial conclusions. You’re looking at a truly pivotal game on the college football schedule, the first-ever College Football Playoff game, which took place on New Year’s Day on ESPN with no other football games on at the same time. The hoops game took place on a Sunday night on truTV, and was on at the same time as two other games. Of course the football game would draw better numbers – it’s basic arithmetic.

Over four networks this year, March Madness is averaging a 7.0 rating – the best mark since 1991 for the tournament to date. I can compare apples and oranges too – the only three bowl games to average a 7.0 or better during the winter were the three College Football Playoff matchups. Yes, fewer viewers watched both of Wisconsin’s first two tournament games combined than their Outback Bowl win over Auburn…but both Wisconsin’s win over Arizona and the Badgers’ loss to Kentucky in the 2014 tournament smashed the Outback Bowl’s viewership total. Maybe instead of comparing one New Year’s Day bowl game to a pair of early tournament games, you compare it to a similarly important game.

Streaming is another aspect that Sandomir disregards, and that’s important in the case of March Madness. With multiple games occurring at once, plenty of viewers will be streaming games on computers, tablets, and phones while watching just one on TV. Through the first two rounds and Thursday’s Sweet 16 games, an absurd 12.5 million hours of video was streamed through March Madness Live by viewers. The College Football Playoff Championship and Megacast combined for slightly over three million hours of video streamed. That helps change the outlook on the early rounds of the tournament.

There’s no competition between college football and college basketball. Bowl games occur during the end of December and beginning of January, usually without going head to head with one another. The NCAA Tournament takes place over three weekends in March (and sliding into April), and every game until the Elite 8 is matching up head to head with another tournament game, helping cannibalize its own audience. I wonder what the viewership numbers for these lower tier bowl games would look like if they were played four or six per day, with two kicking off at the same time. Would the Miami Beach Bowl and GoDaddy Bowl both break 1.3 million viewers if one is airing on ESPN and one is airing on ESPN2 at the same time? I doubt it.