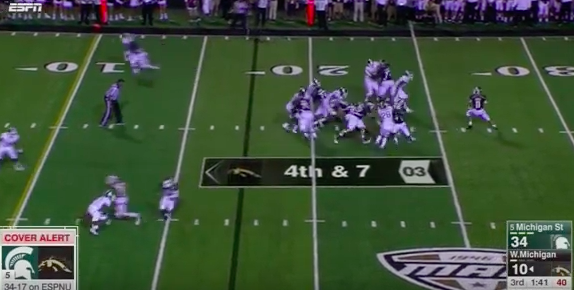 ESPN has made a fairly dramatic shift this season in their college football coverage.  Bristol is putting a much larger emphasis on gambling lines, point spreads, and over/unders when breaking down games and showing highlights this season.  This newfound push to recognize the gambling aspect has been manifested most notably through highlight breaks painted as “Cover Alerts” when a team might be swinging the point spread one way or another.  Gambling references are also a segment on Scott Van Pelt’s new midnight edition of SportsCenter.

The impact of betting on all sports, especially college football, is huge.  And with the increased momentum towards legalizing sports betting across the spectrum (see Silver, Adam) and the daily fantasy boom (which is the closest thing to widespread legalized sports betting you’re going to find) it’s only natural that ESPN would move in this direction.  ESPN knows that there’s a significant portion of the audience with vested interest in these things, so why keep pretending that it doesn’t exist?  If the network does it in a responsible way, the argument can definitely be made that it serves fans and viewers.

College football power brokers on the other hand… are not quite as enthusiastic about ESPN’s point spread push.

USA Today spoke with two conference commissioners and two Power 5 Conference ADs who were all unanimous in their discomfort with ESPN’s newfound emphasis on point spreads and betting lines.

“I don’t think those are things that ought to be a part of the presentation of college football, but maybe that’s the environment in which we find ourselves,” said Big 12 Conference commissioner Bob Bowlsby, adding that he was “quite sure that all of (the Big 12’s presidents and athletic directors) feel as I do that it’s inappropriate.”

“Somebody might say, ‘We’re rights-holders to certain properties, we have the choice,’ ” Oklahoma athletic director Joe Castiglione said. “But this subject has been sensitive for so long, I’m really surprised it has risen to this level.”

“I can’t speak for everybody, but I noticed it — and I’m concerned,” he said. “A lot of us had heard about the plans to talk a little bit more about it during telecasts, but we didn’t necessarily know what it really meant. When you see it, it sort of takes on a different meaning.”

“Anytime there’s anything to do with sports gambling and college sports, understandably that will be something I would hope at some point will be discussed,” Byrne said.

“There is an existing concern about the inexorable march toward gambling being more and more central to sport,” Sankey told USA TODAY Sports. “It has clearly gotten more momentum based on messaging out of the NBA last year. We have to be mindful of the realities of the culture developing around us.”

ESPN responded to the negativity from these college football power brokers by trying to assure that they would cover point spreads and gambling lines on offshore betting sites as they would any other facet of the game.  The network released this statement to USA Today:

“Coverage of sports betting has been carefully considered over a long period of time,” the ESPN statement said. “We recognize that fans are increasingly interested in this conversation and that millions engage in legal sports betting. Our coverage has mirrored that larger trend in recent years and this is another step. We will approach this subject the way we do any beat we cover — providing information while examining trends, topics and stories that are shaping the wider conversation. Our mission is to serve fans and we believe this is consistent with that.”

It’s not like nods to sports betting are a new and crazy phenomenon at ESPN.  How many years has Chris Berman picked games against the spread as The Swami?  Or Hank Goldberg for that matter?  How often does ESPN show point spreads on the bottom line or online?  Go outside ESPN and sports betting coverage has been around for years.  Heck, one of my favorite shows to watch as a kid was ProLine with Jim Feist and pre-Libertarian politics Wayne Allyn Root.  (Maybe that says something about what my life has become.)

And if you’re anyone working in the NCAA, what threat do Cover Alerts from ESPN really pose to the integrity of the game?  Do these executives really think something nefarious will happen because of a “Cover Alert” on ESPN?  Are we really naive enough to believe that would be a game-changer to the foundation of college football?  The NCAA has enough fundamental, institutional crises to deal with without worrying about ESPN telling viewers Western Michigan might cover the point spread.

College football and the NCAA can hide their heads in the sand and try to drum up fear and opposition to bringing sports betting out from the shadows, but these quotes ring just a little bit hollow in 2015.  Just like their position on the “student-athlete.”