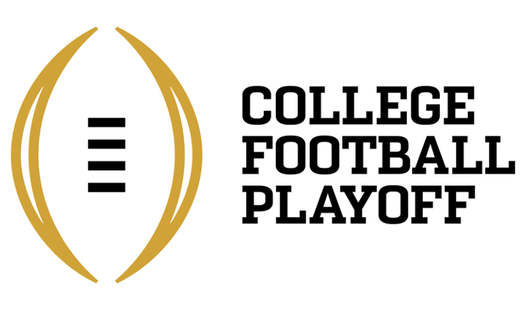 The College Football Playoff has been everything we ever dreamed of and more.  After years of having to put up with the nonsense and inequity of the BCS, finally the powers that be in college football decided to play it out (at least in a limited 4 team fashion) on the field.  And true to this new era for the sport, the National Championship Game of #2 Oregon vs #4 Ohio State is the exact opposite matchup the BCS would have likely produced – #1 Alabama vs unbeaten Florida State.

Now it’s not a perfect system – it won’t truly be perfect until we expand to 8 teams and every FBS programs enters the season with a pathway to winning a title like in every other sport – but it’s a monumental improvement over the old way of doing things.  And America responded.  The National Semifinals on New Year’s Day captivated the nation to the tune of the #1 and #2 cable television programs of all time.  The 2015 Rose Bowl and Sugar Bowl had 28.2 and 28.3 million viewers respectively.  Those semifinals even beat the NFL Playoffs on ESPN head-to-head, a remarkable achievement and a sign that the College Football Playoff is a bigger event than even the most optimistic college football diehards could have predicted.

Everything about the new and improved New Year’s Six system was just what college football needed.  After years of the Winter Classic being perhaps the most compelling sporting event on New Year’s Day, college football took back its rightful showpiece day on January 1.  Gone are the days where mediocre bowl games like the Gator Bowl and Heart of Dallas Bowl populated January 1 and the most important bowls were spread thinly across the week afterwards.

For the first time in a long time, it felt like New Year’s Day actually mattered again.

The day started with a classic Cotton Bowl between two Top 10 teams in Baylor and Michigan State as a part of the New Year’s Six and continued with the Rose Bowl and Sugar Bowl making history with the first playoff games.  To supplement the action, you also had the Outback and Citrus Bowls featuring two more Top 25 matchups.  Five good, important, meaningful games on the day that should be the climax of the college football calendar.  New Year’s Day 2015 was exactly how it should be every year.

But as the title of this article suggests, college football can’t get out of its own way when it finally discovers a bowl system that actually works.

While the sport and ESPN are celebrating record ratings this year, there’s little chance of the feat being duplicated next season and the year after.  That’s because of a little known quirk in the New Year’s Six system.

With the semifinals rotating every year, one might assume the Orange Bowl and Cotton Bowl would take the New Year’s Day timeslots next year and then the Peach Bowl and the Fiesta Bowl after that.  Not so fast my friend.  Instead, the College Football Playoff semifinals will take place on December 31st each of the next two years and not January 1st.  That’s because the Rose Bowl and the Sugar Bowl are locked in to their New Year’s Day timeslots throughout the course of this contract.  Observe… 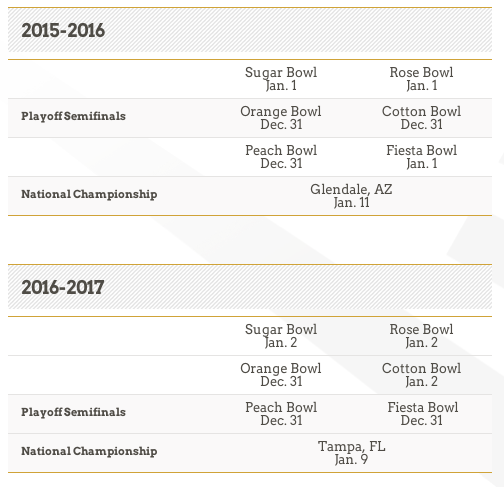 For each of the next two years, and every two out of three, you’re going to have to make the choice between celebrating New Year’s Eve and hitting the town or staying in to ring in the new year while watching the College Football Playoff.  At least it beats watching Pitbull, I guess.

Nothing about this makes sense.

For the next two years television ratings will take a precipitous fall on New Year’s Eve for the two semifinals.  Attendance will not be as strong (as evidenced by the Orange Bowl this year), and interest will likely be down across the board.  Why?  For the simple reason that it’s New Year’s Eve!  That’s not a time where people traditionally find themselves in front of the television.  And barring an overhaul to the New Year’s Six or CFP system, it’s going to be like this for a long time.

Furthermore, we’ll end up in the same position on New Year’s Day in 2016 and 2017 that we’ve been in since the advent of the BCS – January 1 will not be the most important day on the college football calendar.  Instead of New Year’s Day having a main event feel, we’re going to be stuck with undercard matchups taking centerstage.  Sure the Rose Bowl and Sugar Bowl will have good games between good teams… but once again, they won’t be the games that truly matter.

After the first run of the College Football Playoff this year, the two semifinal games simply must take place on New Year’s Day every year.  The crescendo of this year’s New Year’s Six was exquisite, building to the first ever playoff games on January 1.  For the next two years we’ll be getting the grand finale in Act I.

The Rose Bowl has over a century of tradition on New Year’s Day.  That’s fine.  But why can’t the semifinals schedule around that?  And why does the Sugar Bowl have to have a deathgrip on New Year’s Day in primetime when it’s had a history of rotating with other BCS bowls?  Putting the interests of these two bowl games ahead of the interests of college football is an all too familiar and depressing reality.  Once again, college football has placed backroom politicking and powerful interest groups under the veil of “tradition” ahead of everything else that should truly matter.

So college football should enjoy its New Year’s renaissance this year.  But it should also mourn the fact that the sport is acting as its own worst enemy once again.  It took almost two decades to finally overcome the BCS.  After a taste of college football heaven on New Year’s Day 2015, we’ll be back to wondering why and how the sport could drop the ball on something so simple again next year on January 1 2016.