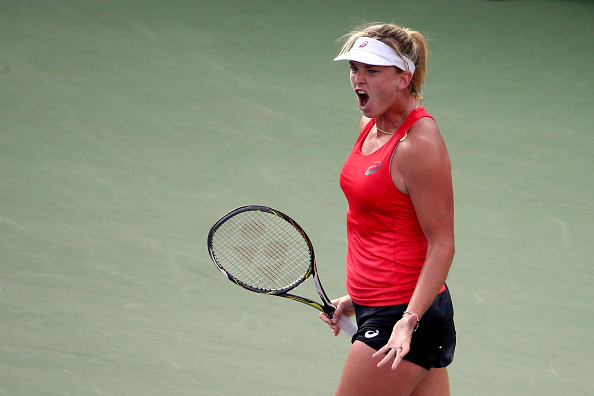 The 23-year-old reached her first major-tournament quarterfinal two months ago at Wimbledon, getting a taste of Centre Court against Maria Sharapova. Vandeweghe’s powerful serve — one of the most imposing on the WTA Tour — can allow her to dictate points and gain leverage with that shot more than many of her peers. Vandeweghe has been able to crack the top 50, and could become an even bigger factor on the tour in the years to come.

Monday, on day one of an already-chaotic U.S. Open on the women’s side of the bracket, Vandeweghe contributed to the exodus of seeded WTA players by dismissing No. 29 Sloane Stephens from New York in straight sets. Vandeweghe is continuing to make her way through the cutthroat world of women’s tennis — that’s more than enough summertime work for most people. Yet, as big as her victory over Stephens was, Vandeweghe made global headlines in tennis for something she did while not playing a point.

Courtney Nguyen of WTA Insider offered a fuller report on Vandeweghe’s groundbreaking day, which you can read here. The shorter version of the story is simply this: Vandeweghe became the first tennis player to give a mid-match interview to ESPN. The network’s in-house talent immediately made note of the occurrence:

How cool @CoCoVandey agreeing to be a tennis "pioneer:" consents to 1st on court interview mid match w/ Pam Shriver. Hope more agree to it!

As Darren Cahill noted above and as Chris Fowler subsequently explained in conversations with members of #TennisTwitter, the player who wins the first set has the option of granting the interview. This is not a mandated practice. If Gregg Popovich was as good at tennis as Novak Djokovic is, he’d win first sets and would never, ever grant ESPN an interview. Vandeweghe, however, took the plunge.

It’s worth saying two things about Vandeweghe herself: First of all, her achievements stand on their own merit, because of who she is… not because of who she’s related to. (That’s always important to note when talking about prominent female athletes. They are their own best advertisements, not a reflection on the men they might be related to.)

Second, it DOES merit mention that Vandeweghe is related to former New York Knick Ernie Vandeweghe (granddaughter) and former NBA player Kiki Vandeweghe (niece), who is now an NBA employee. Why?

Consider the quote Vandeweghe gave to ESPN’s Pam Shriver — who conducted the mid-match interview — after the victory over Stephens had been completed:

“In general, I’m a sports fan,” Vandeweghe said. “For anyone to have an insight into an athlete’s mind is a positive. I’m glad ESPN was open to the idea.”

Vandeweghe grew up in a family which was accustomed to the pressures and possibilities of professional sports. The Vandeweghes were used to the spotlight and loved sports. This might not have made CoCo Vandeweghe the pioneer she became on Monday, but it seems reasonable to say it helped shape this decision and the willingness to go ahead with it.

Other players who are more protective of their privacy, or who find the idea of a mid-match interview to be an intrusion, clearly do not share Vandeweghe’s views and will not grant a mid-match inteview anytime soon. That’s worth stating at the outset. What also needs to be said right off the bat is that as long as this remains a voluntary practice — something the player can choose to either accept or decline — it’s not going to become too big an issue.

However, it’s certainly something the larger sport of tennis needs to pay attention do, as do its broadcasters.

Darren Cahill, referenced above, is just about the most thoughtful tennis voice on American television today. He’s also extremely good about respecting viewers and offering them more disclosure, rather than less, about various issues under the sun. One progressive thing Cahill has done is that on his Twitter bio, he states up front that he is employed by Adidas. He coaches world No. 2 player Simona Halep through this professional association with Adidas.

Other tennis commentators — such as Tennis Channel’s Justin Gimelstob or ESPN’s Mary Joe Fernandez — have various commercial or coaching commitments that point to potential conflicts of interest. This emergence of the mid-match interview in tennis is not chiefly a conflict-of-interest story, but it certainly means that specific tennis broadcasters with industry ties or personal relationships cannot be the ones conducting interviews with specific players. Cahill, for example, could never do a mid-match interview with Halep. It’s obvious, but tennis is not a tightly-governed sport, and up-front disclosures of professional affiliations are not as common as they should be. (Cahill, as he always does, sets the gold standard and the proper example.)

This is certainly something tennis networks and national media outlets need to be cognizant of as the mid-match interview gains traction in the course of time.

The other big tension point flowing from CoCo Vandeweghe’s milestone interview at the U.S. Open is that with Pam Shriver — or any expert tennis commentator — handling an interview between sets, the question arises: “Don’t interviews represent on-court coaching, or can’t they easily be construed as such?”

One could make the valid point that a non-former player — or at least someone not prominently associated with the analytical or teaching components of tennis (Tom Rinaldi would be a perfect example here) — should be the only person allowed to conduct interviews. Shriver — who does not have a conflict-of-interest relationship with Vandeweghe (not to my knowledge, anyway) — could make a perfectly normal reference to hitting backhands and forehands. After all, that seems like a perfectly normal discussion topic in a quick two-question interview between sets. Many tennis fans expressed grave concerns about blurring the lines between interviewing and coaching.

Opinions will vary on this issue — and tennis fans are going to continue to debate this point for quite some time — but one central component of coaching is the synthesis of tactics with motivation. In a two-question interiew lasting no more than roughly one minute, an interviewer — even one with former experience as a player — is going to have a hard time being specific enough to risk crossing the line between interviewing and coaching.

A player — especially one who just won the first set — is less in need of coaching than the player who lost the set, for one thing. Second, a player generally knows what s/he did well and did poorly in the first set. If an interviewer asked a player, “Why haven’t you gone down the line with your backhand when Opponent X continuously slices the ball crosscourt and short, near the service box?”, that can fairly be considered coaching. If such an exchange ever occurred, though, you’d probably get an uproar from players and fans, and the practice would be discontinued.

Expect interviewrers to stick to, “How did you feel about that set?” and “What do you think you need to do in this second set?”

This leads us to an ironic conclusion, at least when viewed from a certain angle: For all the publicity this story is (quite reasonably) gaining, the reality of the mid-competition interview in all sports is that it historically offers very little of substance.

That’s probably how it’s going to be in tennis… just like the NBA and the NFL.