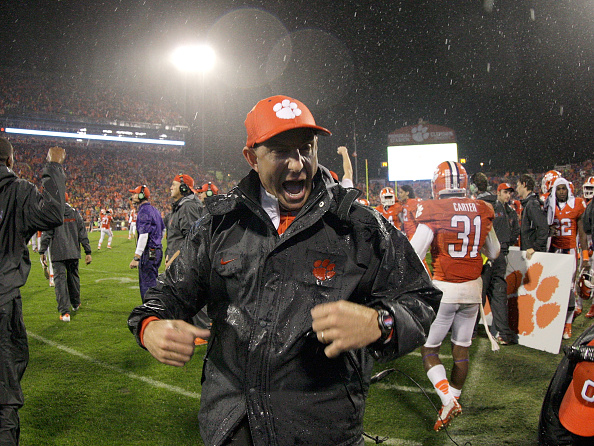 Is the term “#Clemsoning” fair to Clemson, or should another program bear the brunt of a label which points to the consistent squandering of pigskin prosperity?

Is the hashtag — specific to one school and one football program — properly used in the present day on College Football Twitter?

In the links above, I’ve addressed these questions, so that’s not what you’re going to find here.

The purpose of this piece is to attempt to make sense of Dabo Swinney’s anti-Clemsoning remarks over the weekend, in an exchange with a reporter who mentioned the hot-button term:

What matters here is not what Dabo thinks or what you think of him. Whether Clemsoning is fair or not? That’s also a peripheral discussion in this particular assessment.

The question worth addressing today is as follows: “Why does it matter that the coach of a major college football program not only knew about a term which grew through repeated use in social media forums, but felt the need to speak so passionately against its continued use?”

What can be gleaned from this seemingly innocent point of curiosity?

You might think this is trivial. (Note: You might also be right.) However, haven’t you encountered at least one or two moments in your life when something comparatively trivial taught you something profound about this world, something you carried with you for years (if not the entire duration of your earthly sojourn)? I know I have.

To be more precise about this topic, the trivial thing which has taught me a lot about life and human beings and myself…

… is this thing called sports.

Yes — from this theater of activity which, on its face, seems so utterly inconsequential, we derive a great deal of pleasure and emotional attachment. We wake up feeling better or worse depending on the outcome of the previous night’s big game. We plan our lives around sports and make it a social hub for many of our gatherings with family or friends (or both).

The enduring value (and beauty) of sports is precisely found in its identity as something which is so evidently NOT a matter of life and death. In the comparative triviality of sports, human beings find a “safe” topic on which they can disagree (sometimes, not all the time) and still be friends afterward. Politics and religion don’t check this box, but sports does to a much greater extent — not universally, but certainly at a far higher rate.

Let’s therefore take everything that’s been said above and apply it to Dabo Swinney.

You might not agree with where he lands on various issues pertaining to collegiate athletics, but he certainly puts a lot of care and thought into what he says and does. What’s more particular to Dabo than a number of other coaches is that Dabo is more of a CEO coach as opposed to a guy (such as his sometime verbal sparring partner at the archrival University of South Carolina, Steve Spurrier) who loves to call plays himself. Dabo is a delegator, a man whose most important actions as Clemson’s head coach were his two big coordinator hires — Chad Morris (now SMU’s head coach) in 2011 and Brent Venables (still on staff) in 2012.

Dabo is good at seeing the big picture. Again, you might not agree with how he applies his big-picture vision, manifested in actions such as his social-media ban for his players. However, Dabo is connecting dots and constantly refining a strategy (shrewed and effective, it seems) of managing outside information and being attentive to what casts Clemson in the best possible light.

The late, beloved Yogi Berra said, “You can observe a lot by watching,” and Dabo fits this to a tee. He keeps eyes and ears open, and it’s from this attentiveness that he gained an awareness of “Clemsoning” as a term-cum-hashtag. Realizing how fully he and his program have shattered the legacy of underachievement inherited from previous coach Tommy Bowden, why wouldn’t Dabo want to bury “Clemsoning” once and for all? This is about branding, and it’s about being proactive in the effort to make sure that something which acquired a certain level of cultural penetration can begin to die out as a regularly-used term.

Dabo Swinney is doing nothing less than fighting against a culturally-entrenched term. He’s making an effort to uproot it, and what’s worth specifying is that Dabo didn’t just launch into a speech; he responded to a reporter who brought up the subject.

College football is a nationally visible sport, but it still has a very local and regional flavor. Clemson is just such a place where the intimacy of the sport — with a fiercely protective and territorial love of one’s school — emerges in ways the NFL would never be able to match. It is in this hyperlocal context that Swinney’s anti-Clemsoning stance — both the awareness of the term and the felt need to speak against it — can be better understood.

This is the personal side of the politics of college football, in a state (South Carolina) which is known for its cutthroat politics. Dabo Swinney is fighting for himself and his constituency. Having shielded his players from social media (something he felt he needed to do), he is also trying to redraw the boundaries of what terms and hashtags Twitter uses when a college football program squanders a glorious opportunity to achieve something.

This is, from one vantage point, quite trivial. It doesn’t feel that way to Dabo Swinney, and in the counterintuitive workings of life, I think it makes sense for Dabo to take this matter seriously.

It’s all about context… and not the one I have, but the one in which Dabo operates.